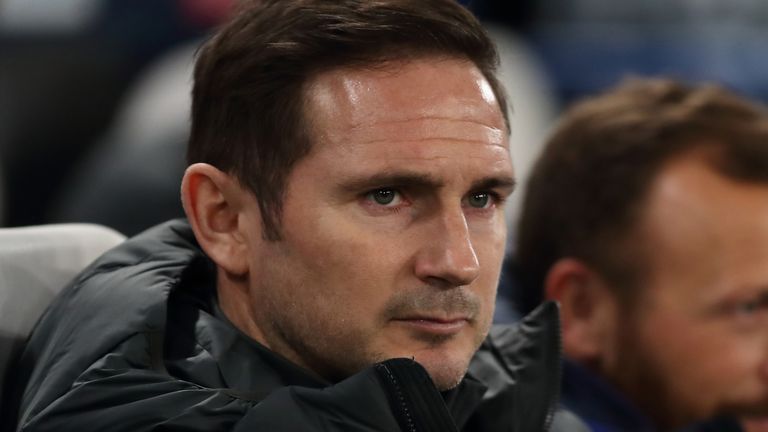 Gomes will become a free agent on Tuesday after failing to agree a contract extension at United and reports had suggested Chelsea were ready to offer the 19-year-old a lucrative deal at Stamford Bridge.

Lampard has hit back those reports and says he’s never discussed signing Gomes, who made his debut for United in 2017 aged just 16.

“I can elaborate to the point that it’s never been mentioned on my end. That’s it. ” said Lampard.

Chelsea travel to face London rivals West Ham on Wednesday, live on Sky Sports, and could potentially go third with a win – if Leicester drop points at Everton.

Chelsea have been linked with a move for Hammers midfielder Declan Rice but Lampard has refused to confirm if the club are interested in the England international. “Declan Rice is a good player. I’ve known him for a long time, he was in Chelsea’s academy but there’s no talk,” he said.

“I’ll keep saying it about every player that we’ll be asked about until this season is finished – there’s nothing to say.”

Lampard could be without Christian Pulisic and Andreas Christensen for the trip to the London Stadium.

Pulisic was substituted in the second-half of Sunday’s 1-0 win over Leicester in the FA Cup quarter-finals, while Christensen is still a doubt after missing the match with a hip problem. “Christian (Pulisic) felt a bit of tightness in his calf just as he came off against Leicester, so we’re managing him but I haven’t got an answer yet,” said Lampard.

'It cannot be disallowed!': Neville slams decision to rule out Harry Kane goal

Timo Werner reveals what Antonio Rudiger told him about Chelsea to help seal transfer
Recent Posts
This website uses cookies to improve your user experience and to provide you with advertisements that are relevant to your interests. By continuing to browse the site you are agreeing to our use of cookies.Ok