‘We are talking about a world-class player’: Antonio Conte labels Son Heung-min ‘one of the best in the world’ before duo perform forward’s trademark goal celebration on pre-season tour of South Korea

‘We are talking about world-class player,’ beamed Tottenham boss Conte. ‘One of the best players, and maybe many people underrated him because Sonny can play in any team in the world.’

Son sat beside his head coach as they fielded questions from a packed press conference room at the World Cup Stadium in Seoul, where Spurs will launch their pre-season schedule against the K-League All Stars on Wednesday. 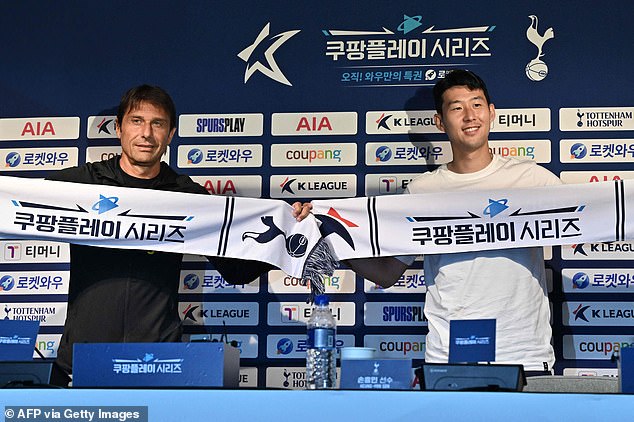 ‘He knows my thoughts about him,’ added Conte before posing for pictures with his striker, with both of them performing Son’s trademark goal celebration. ‘Every time I had the pleasure to speak about him, I can tell only positive things.

‘We are very lucky he stays with us and I am very lucky to have him in my team. It’s a pleasure to have a player like him. Always with a smile and you can see during training, always a great attitude, great commitment.

‘He is top class, with fantastic quality with right foot and left foot, and he runs a lot. It’s very difficult to ask for more from your player. We are talking about a world-class player, one of the best in the world.’

Korean fans were concerned when they saw Son suffering during a punishing running exercise in Seoul’s sweltering summer heat and humidity, at the end of an open training session in front of 6,000 spectators on Monday. 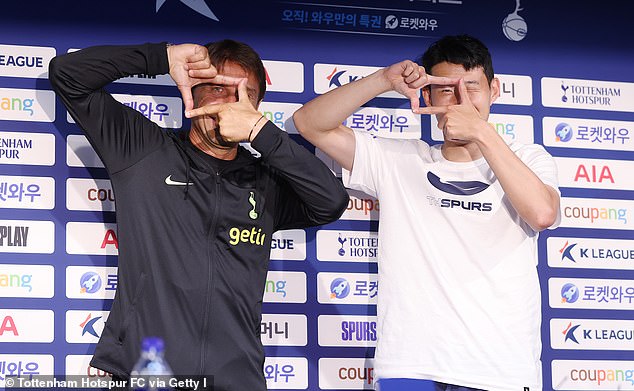 The duo posed for pictures, with both of them performing Son’s trademark goal celebration

Those players who were already a week into their preseason schedule were pushed through 42 lengths of the pitch, almost five kilometres in about half an hour, at the end of a punishing session.

Those only just back in training, a group including Son and Harry Kane, ran 30 lengths under the scrutiny of Conte’s fitness guru Gian Piero Ventrone.

‘I’m not sure how many kilometres it was but there is a set target the coaching staff want us to cover,’ said Son. ‘There were no particular words afterwards because the training was very hard. That was the one thing the players were saying was, that it was hard. 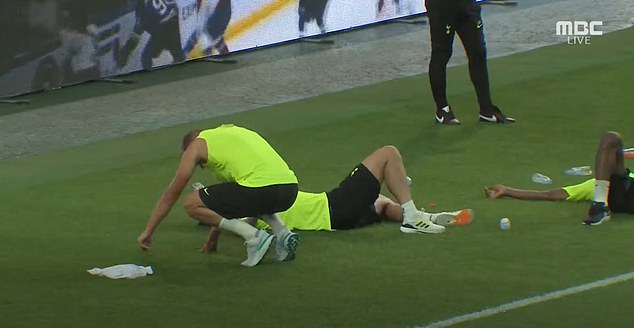 ‘Team spirit is good, the team is doing well and the training is very important ahead of long season. We ended last season with a good win and want to start season in same manner.’

Son spent his summer in South Korea and was at the airport among hundreds of fans who greeted the Spurs party when they arrived on Sunday.

‘The welcome we received has been amazing,’ said Conte. ‘Thanks for this and also to find Sonny, it was great to see him and give him a big hug. I didn’t see him for one month and it was a lot of time.

‘We are happy to be in Korea and we are enjoying our time here, and it is a pleasure to stay in Sonny’s home. We want to enjoy this time and we are happy.’ 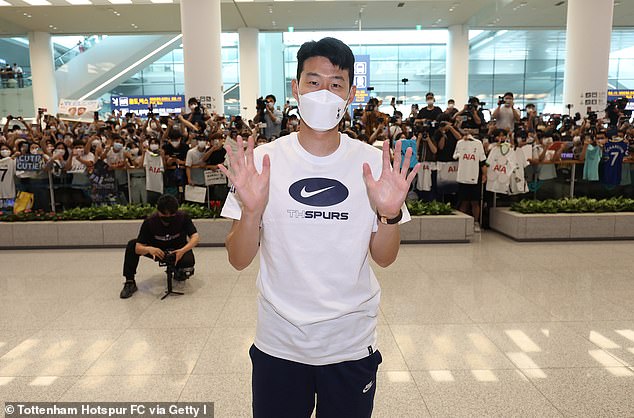