Antonio Rudiger was on his way to hospital to visit his newborn son when he paused to hit back at the Tottenham fans who had just booed him as he spoke of six days of conflicting emotions.

From the depths of a home defeat to Manchester United to the thrill of this vital win against Tottenham, it proved to be a week of extremes at Stamford Bridge.

For Rudiger, there was also the joy of witnessing the birth of Djamal, his first child, the stomach-churn of an unfortunate own goal and the horror of finding himself jeered by Spurs supporters. 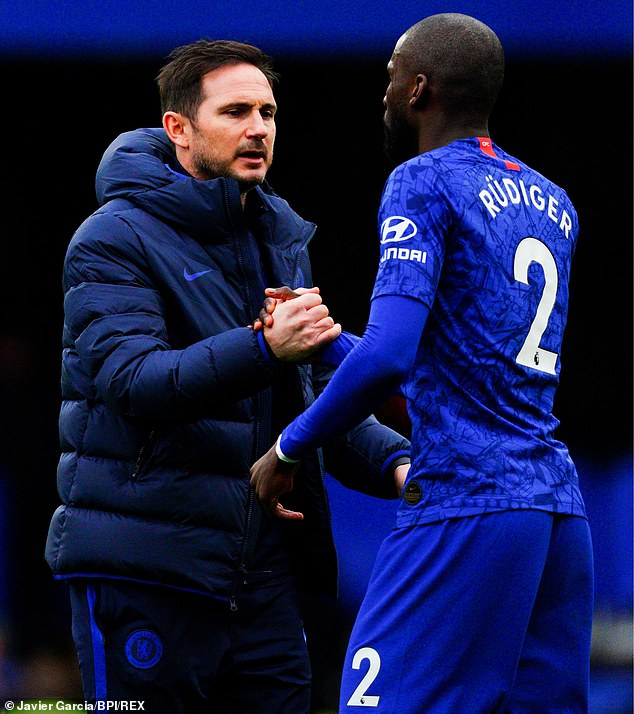 His crime, it seemed, was to have spoken out about the monkey noises he could hear coming from the crowd when Chelsea won 2-0 at Tottenham in December.

‘If you boo me because of that, then you are poor people,’ said Rudiger. ‘I am sorry, this is a sign that we have a very big problem. It’s sad. At the end of the day, I am alone in this case because I am the one who has to swallow this. It makes me feel like it will always be like this. For me, in this case, racism won.’

He said it was impossible for white society to appreciate how it feels. ‘I’m not trying to offend,’ he told the four white journalists in conversation. ‘But you people will never understand what goes through my mind in this moment. Or other black players’ minds. 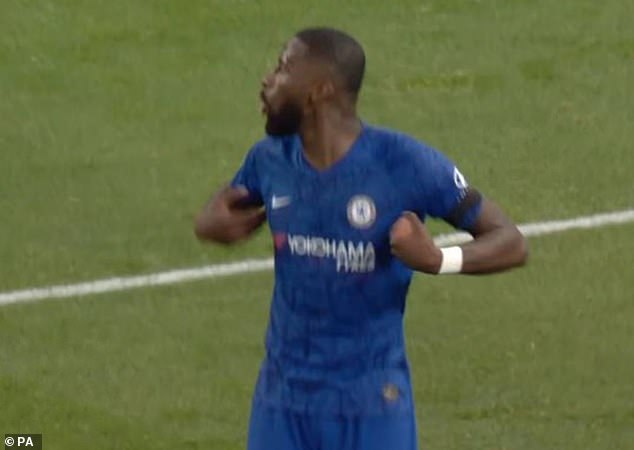 ‘I am alone. I am totally alone. It’s nice if people are speaking up for me but, at the end of the day, it just replays. Authority-wise, I am alone.’

Rudiger was speaking on the matter for the first time since Tottenham away — the police closed their enquiry into the incident having failed to find any evidence of racism.

‘I’m very careful with this,’ said the 26-year-old Germany centre-half. ‘I’m not in the investigations. I’m not a police officer. I don’t want to say they did their job wrong because I’m not in a position to do that. 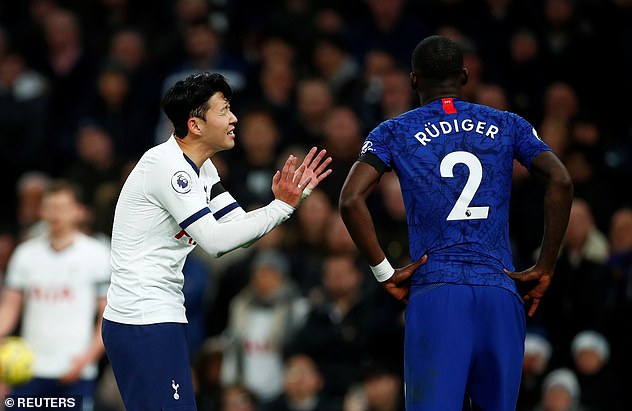 ‘I hope they tried everything. I hope always people do their job right. Nothing happened and, to be honest, it was not a surprise. Mostly, they get away with it.

‘These people need to be punished. They need educating. It’s a lack of education. We all failed in this — even you (the media).

‘We have so many people coming into the stadium and, in that game when it happened against me, Chelsea fans got arrested because Chelsea fans reported the other Chelsea fans who abused Son Heung-min.

Like everyone else, I was staggered that VAR official David Coote did not recommend a red card after Spurs midfielder Giovani Lo Celso stamped on Chelsea’s Cesar Azpilicueta.

Coote had all the angles available and should have been able to determine this was a clear stamp that endangered the safety of an opponent.

I understand how Michael Oliver could have missed the incident because of his positioning. It happens, but that is why VAR is there. Why Coote did not recommend Oliver check for himself on the monitor, I do not know. I’m sure Oliver would have sent off Lo Celso.

The FA are powerless now to ban Lo Celso retrospectively, because the incident was referred to VAR and checked by the officials.

Coote’s day went from bad to worse during the evening game, when he failed to punish Manchester City’s Kevin De Bruyne after he raised his arms and deflected James Maddison’s free-kick.

An argument could be made that De Bruyne was protecting his face, but at the point he handled the ball, his arms were away from his face and he was therefore making himself bigger.

It should have been a penalty.

On the back of Coote’s performance, I am sure Professional Game Match Officials Ltd will no longer allow VAR officials to do two games in one day.

VAR did its job well in awarding Burnley a penalty as Bournemouth celebrated scoring a goal at the other end. This was always going to happen, but VAR got it right. Adam Smith misjudged a cross and handled the ball inside Bournemouth’s penalty area.

His team then broke and scored but VAR Chris Kavanagh did an excellent job in informing referee Mike Dean of the handball and a penalty was correctly given to Burnley.

‘On the other side, nothing happened. It’s the people who were around. And that’s why I say, if we don’t stand up, racism won. If there is no punishment for these people, racism won. I am the bogeyman, end of story.’

Rudiger acknowledged support from Chelsea and his teammates. Also from Spurs players, including Harry Kane, who offered his apologies when they were together in the doping control room post-match at the Tottenham Hotspur Stadium.

He is not convinced the solution to the problem is for players to walk off the pitch. He also promised not to hold back from speaking out again in the future.

‘I will always stand up,’ added Rudiger. ‘It’s not only about myself. It can be homophobic or something like that. It’s about standing up for people. I think this is normal.

‘I’m not hurting anyone. I’m not killing anyone. I will always stand up for other people. I will not leave anyone like this.’ 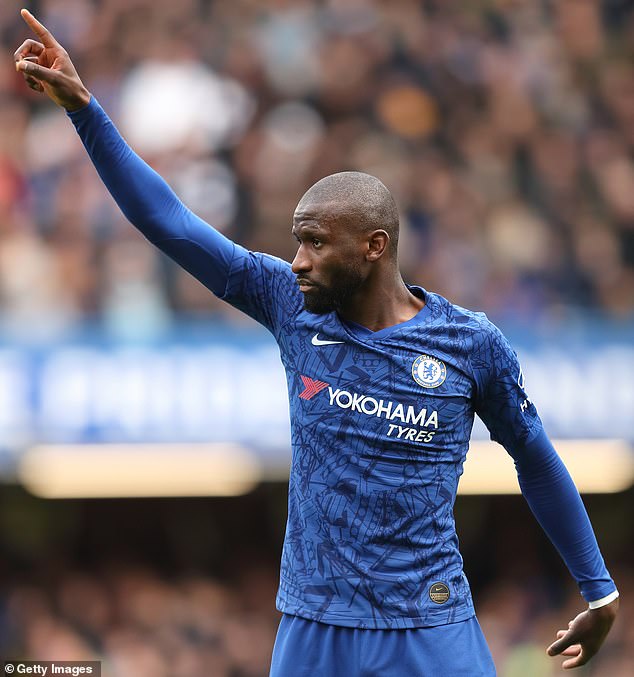 Chelsea’s dominance helped to silence those jeering him from the away end. Olivier Giroud fired them into the lead with a crisp volley and Marcos Alonso added a second, a whistling drive with shades of Carlos Alberto in the World Cup final of 1970 to complete a slick move.

Alonso also rattled the bar with a free-kick and Hugo Lloris made fine saves from Mason Mount and Tammy Abraham before the deficit was reduced when Rudiger deflected an Erik Lamela cross into his own net.

With victory secured and confidence restored ahead of a Champions League tie with Bayern Munich, this final twist could not spoil a week he labelled the best of his life.

And off he strode to see his boy Djamal, promising to raise him the right way and continue leading the fight for equality.

‘If it happens at football, it is also happening outside,’ said Rudiger. ‘Outside, my son is going to be growing up. I will do my best to make sure my son is not stupid like other people. Sorry for this word, I don’t have any other words for this.’ 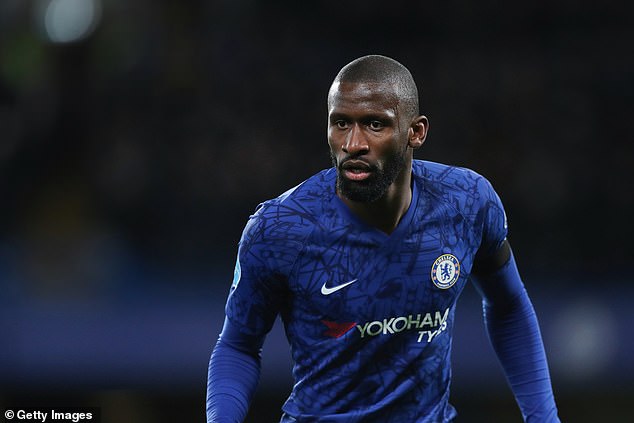