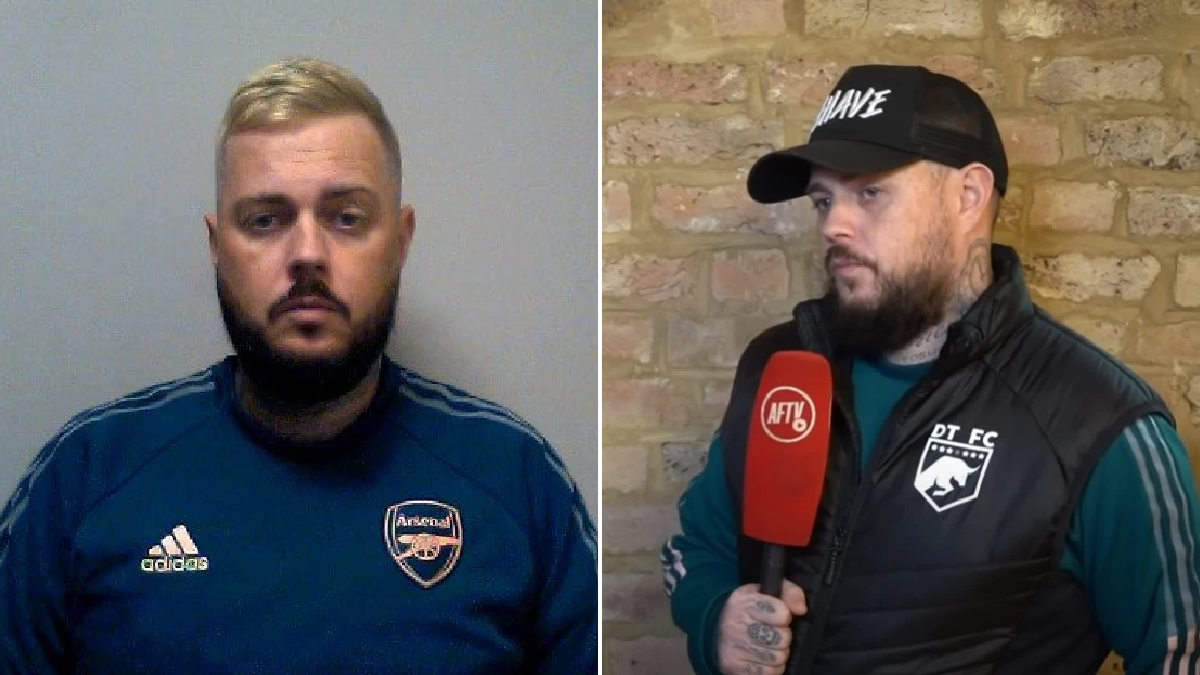 Arsenal fan TV star ‘DT’ has described his assault and kidnap on his former girlfriend as ‘nine minutes of madness’ after his prison sentence was tripled.

Liam Goodenough was initially sentenced to 12 months in prison and given a 10-year restraining order after being convicted of stalking involving serious alarm or distress, and kidnapping.

A statement released by the Attorney General’s Office revealed that Goodenough ‘stalked his former partner as she went on a date, jealously sending the victim’s brother messages threatening suicide and demanding to know the location of the victim.

‘Using a tracking feature on her phone, Goodenough drove to the hotel the victim was staying at and verbally abused her, as well as assaulting her companion. He then proceeded to photograph her in a state of undress.

The one-year prison sentence was referred to the Court of Appeal by the Solicitor General, Alex Chalk QC MP and was deemed ‘unduly lenient’. Goodenough’s sentence has now been increased to three years in prison.

In his statement released on Thursday evening, Goodenough wrote: ‘I know a lot of you would have seen the news about me this week and I know I have let a lot of you down but there are always two sides to a story and mine will be told in good time.

‘After months of receiving help and guidance I now know I was suffering from a mental breakdown and on that night I simply snapped.

‘This is not me condoning my actions I am just trying to paint a picture of what was going on in my life at that time. All I ask from everyone is that you read the key parts of the report and not the sensationalised headline.

‘I cannot apologise enough to my ex-partner for putting her through this. An eight year relationship will now be remembered for nine minutes of madness and I will forever be sorry for it.

‘I want everyone to remember the innocent ones in this are my children. I am in regular contact with them but my actions have turned their lives upside down. All I can do now is serve my time and be a better father and man for it.

‘I have also heard about a statement that’s been released from someone that I called a friend, again I will address this and its content in due course too!

‘I’m sorry for letting you all down, I do not deserve anything from anyone but just know I am sorry.

Goodenough, 42, has over 238,000 followers on Twitter and over 257,000 subscribers on his personal YouTube channel following his time spent as a regular contributor to Arsenal fan channel AFTV.

He also set up his own football club, DTFC, who play in the Essex Alliance League.

AFTV have confirmed that Goodenough will never feature on the channel again following his conviction.

A statement from AFTV this week read: ‘This morning we have been made aware of news regarding DT, who was a regular contributor on AFTV until July 2021.

‘We are utterly appalled and disgusted by his actions and totally condemn domestic abuse, or violence of any kind.

‘DT had made us aware of personal issues in his life, however we can unequivocally say that the extent of the information made public by the Government today is new to us

‘DT appeared on AFTV on 1st Jan when the severity of his legal case was unbeknownst to us. The recent developments come as a complete shock to all at AFTV.

‘In light of the shocking news, DT will be offered absolutely no place on the channel again.’