There is a small brief pause. Just one second, but long enough to wonder whether the Zoom call has frozen. “I get asked this question a lot,” says Stephy Mavididi, as he glances into thin air from the comfort of his Montpellier apartment, some 765 miles from home. “I always say the same thing. I tend not to look at the regrets or my past decisions. But in me, I know how good I am, that’s what I focus on.”

It would be easy to forgive Mavididi – who is quickly emerging as one of the brightest young talents in France – for wondering just how different things might have been in the current climate for the 22-year-old Arsenal academy graduate, who parted company with the Gunners in the summer of 2018 shortly after the appointment of Unai Emery.

Not only did he share the pitch with the likes of Emile Smith Rowe, Eddie Nketiah, Reiss Nelson, Joe Willock, Alex Iwobi, Serge Gnabry and Hector Bellerin, but they were also companions in the classroom following his enrolment in the club’s full-time programme at the age of 14.

“Some of them are really, really close friends, even more than friends. More like family,” Mavididi says, as he reflects on his fond memories of academy brotherhood. “Once you get over the age of 16, you’re all together. The best players play, regardless of your age but it’s good because you get to interact with old players and younger players and compete with them.”

There’s a small smirk, as he recalls memories of a young Bukayo Saka climbing the ranks, but there’s no envy or sour taste of resentment when reflecting on those he left behind at London Colney, those who made the grade and were given a chance to feature as part of the first-team. 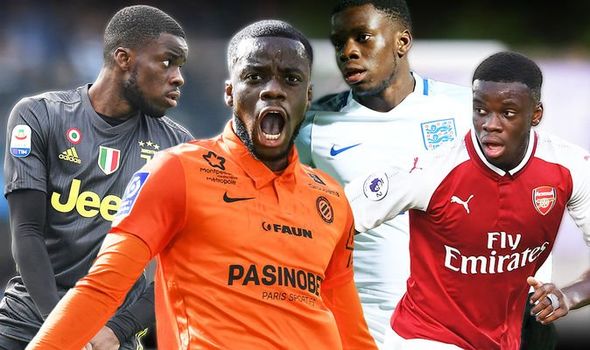 Mavididi had been earmarked as one of the club’s brightest young prospects by Arsene Wenger, following consultation with his academy coach Thierry Henry but the Frenchman’s decision to step down after 22 years as boss in 2018 left his first-team hopes hanging by a thread.

That thread was eventually snipped during a meeting between Arsenal and the player’s representatives that summer after play-off semi-final heartbreak with Charlton when all parties decided that the time was right for Mavididi to pursue new ventures.

“The boys that are there now deserve their chance because they are good players,” Mavididi adds on his former team-mates, with some now part of Mikel Arteta’s fresh-faced exuberant core.

“Within that group, I was one of the good players, so looking at it from that perspective it’s kind of hard to tell whether he would have liked me.

“Unai wouldn’t have known much of us. He was going off what people were telling him but I kind of got the feeling my time at Arsenal was done. I was on loan at League One, rebuilding my fitness after missing eight weeks through injury. I thought I was ready and I was good enough but they thought otherwise.”

Yet it wasn’t long before the phone was ringing. Italian champions Juventus were calling and precisely, it was Giorgio Chiellini’s twin Claudio on the other end of the line.

The Juve defender’s brother was tasked with rejuvenating the club’s under-23 side and was targeting the best players born in 1998. It was a no-brainer.

Chiellini met Mavididi and his entourage off the plane upon touchdown in Turin, accompanied by chief Juventus scout Matteo Tognozzi.

Tognozzi, who was recently considered by both Manchester United and Celtic respectively for a position as a sporting director after obtaining his license with the Italian FA in 2019, knew how to make Mavididi feel valued: “He said: ‘we’ve been tracking you for a while now’ and they were telling me games that I’ve played in that even I don’t remember. It was encouraging to hear and showed Arsenal were letting a good player go.” 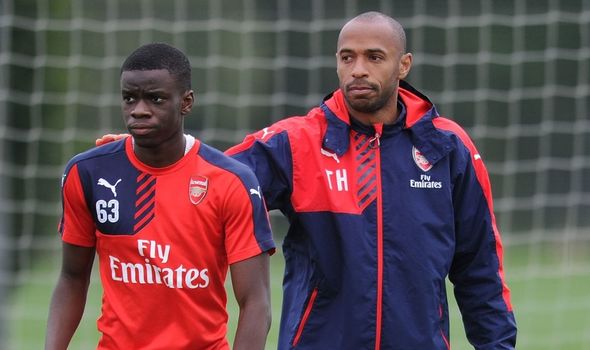 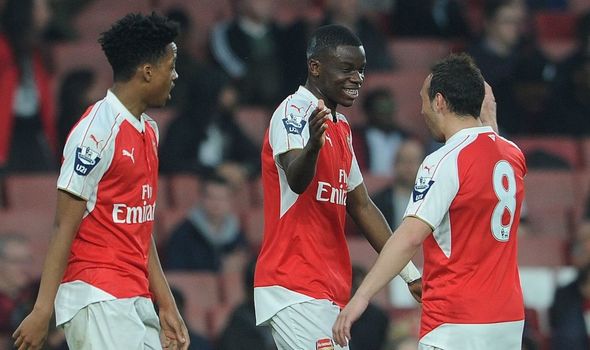 Mavididi would play just once for the first-team during his one year at Juventus, making his Serie A debut against SPAL, but the day-to-day experience of working under serial-winner Massimiliano Allegri’s regime proved invaluable.

“I was trying to learn Italian, I was having lessons three times a week so I could understand most of what was being said,” Mavididi says. “Any time Allegri wanted to speak to me I could respond, he spoke to me in Italian but if he wanted to tell me something very detailed, he would get a coach that speaks English to speak to me.”

Miralem Pjanic, who speaks six languages, would also step in as an additional translator while Blaise Matudi, Emre Can and Adrien Rabiot all played their part to ensure Mavididi felt at home after becoming the first Englishman to play for the Bianconeri since David Platt. 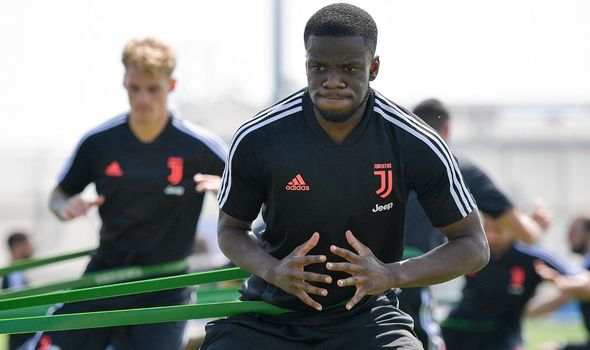 Mavididi on training with Cristiano Ronaldo

Having listened, learned and sharpened his craft as a raw talent at Arsenal under idol Henry, Mavididi now had a new mentor to help drive him to new heights on the training ground in the form of five-time Ballon d’Or winner Cristiano Ronaldo, whose standards set an entirely new benchmark altogether.

“At the end of training, I was like to my team-mates ‘f****** hell, that’s the level man’. To do that in training, it was incredible to see. If anything it makes you pull your socks up. 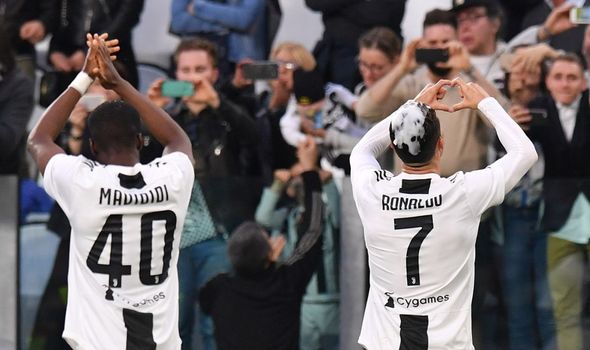 Away from the grind of preparation, gym work and Italian lessons, Mavididi would often spend downtime with Moise Kean playing Fifa or dining out in the city’s restaurants on an evening.

The pair would soon go their separate ways when Kean completed a £23.6million move to Everton, while Mavididi finalised a loan move to Dijon following a recommendation from Henry after reaching out to several of Arsenal’s French academy players, who sold him the project following a second opinion.

“They said it would be good for me to show myself in a big league, to play against PSG, Marseille, Lyon and Monaco,” he explains. “That’s what really sold it to me, I thought ‘why not’.”

It was a decision he did not live to regret as he netted eight goals in 28 appearances before catching the eye of Montpellier, who he scored against in a 2-2 draw back in December 2019.

He would later join La Paillade for £5.4million last summer, where he has become a focal point in Michel Der Zakarian’s attack alongside Andy Delort and West Ham’s January transfer target Gaetan Laborde.

But it was his sobering baptism of fire away from home on loan at Preston in 2017 that convinced him to stay in Europe, where he is now becoming a trailblazer for young English talent struggling to make their senior breakthrough on home shores.

“The loan at Preston helped me massively even though I didn’t play as much as I’d have liked to,” Mavididi adds. “Mentally it changed me, being far away from home, being alone and being in a dark place. It really helped me mentally. It’s one of the main reasons I choose to move abroad.”

Mavididi has already matched last season’s tally in as many games and Montpellier are still knocking on the door for a Europa League spot, while they also have a French Cup last 16 clash with Voltigeurs de Chateaubriant to come. 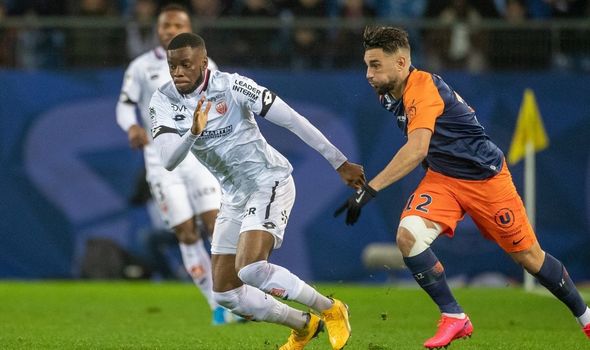 “It was definitely a step up, internally that’s what you want to do, get to the next level and then next level after that,” Mavididi explained, when asked why he opted to join Montpellier.

“We played Montpellier when I was at Dijon. The two times I thought ‘wow, this is a really good team, nobody really speaks about them’. They speak about PSG and the top teams but nobody speaks about Montpellier.

“When we played them, their style of play was really attractive to me. It’s a team that’s fighting for Europe and things like that. It’s an opportunity that I wanted to take.

“When people ask me what the style is like in Ligue 1, I say it’s like basketball. It’s end-to-end. After the first 15 or the second half, once you reach like 60 minutes it’s back and forth. It’s so fast and entertaining to watch and play.” 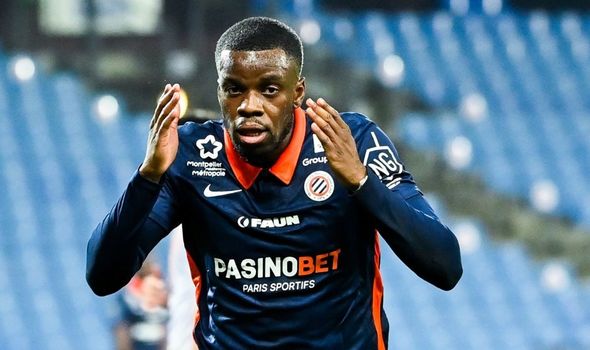 Mavididi is now rubbing shoulders with the likes of Kylian Mbappe and Neymar in Ligue 1 but he has no time to admire his attacking peers: “When you’re up against them, it’s literally just let’s get on with business. At the end of the day, they’re both human. They’ve got two eyes, two arms, two legs and one nose.

“They just have incredible talent, it’s a pleasure to play against players like that. To test yourself and see how far off you are.

“I remember last year, some of my friends came to watch us against PSG. We knew they were good but we didn’t know they were that good. Seeing them live, you see how big they are, how fast they are and things like that.”

The complications surrounding travel restrictions during the pandemic have halted potential visits from his family and friends but Mavididi’s brother is on hand to remind him of home with regular shirt swap requests via WhatsApp.

“Whenever we play a match against a big team, he’s on WhatsApp saying ‘I want this shirt, I want that shirt’. I collect them for him,” Mavididi laughs. “My latest one was Memphis [Depay], I was just about to go out and warm-up, as I was changing the music on my phone I see a message from my brother. No good luck, no nothing. ‘Just get Memphis’, so I was like ‘okay’.” 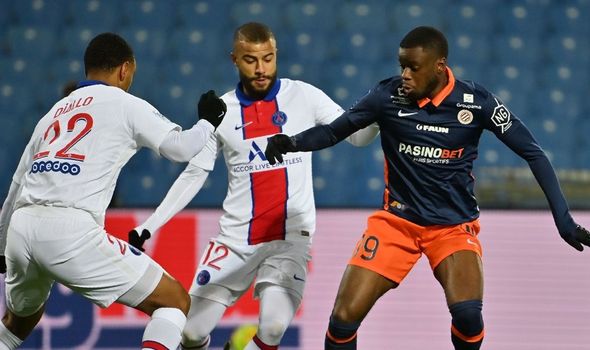 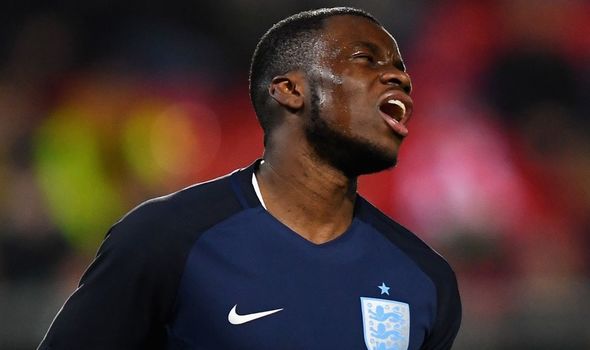 Mavididi represented England at U17, U18, U19 and U20 level but has not heard from the Football Association in nearly two years, when he was on standby for the Toulon Tournament in 2019. He was eligible for this year’s U21 European Championships but was overlooked by manager Aidy Boothroyd.

Similarly to Manchester United full-back Aaron Wan-Bissaka, Mavididi also qualifies to represent DR Congo but he’s yet to think that far ahead, as he refuses to give up on his dream to play for his country.

“There’s three of us now [Jonathan Panzo (Dijon) and Trevor Chalobah (Lorient)], in France that are playing against PSG, Lille, Monaco,” Mavididi adds, after questioning what more he can do following his latest international snub. “I’ve scored against PSG, scored against Monaco, played against Lyon and Marseille and fighting for European positions but the coach is the one who makes the decisions.

“My dream is to play for England, you’ve got the Euros in the summer and we’ve got the Olympic Games, so we’ll see…”

Receiving his first senior England cap is not his only dream and Mavididi insists he places his hopes of returning to the Premier League one day in the hands of God.

Should he continue to score, assist and shine while playing regularly in Ligue 1, it will only be a matter of time before a host of English clubs come calling…