Arsenal’s owners, the Kroenke family, insist they “are not selling any stake” in the Premier League club, amid talk of a takeover from Swedish billionaire Daniel Ek.

But Stan Kroenke and Josh Kroenke say they remain “100 per cent committed” to Arsenal.

“In recent days we have noted media speculation regarding a potential takeover bid for Arsenal Football Club,” read a statement released by Kroenke Sports & Entertainment (KSE).

“We remain 100 per cent committed to Arsenal and are not selling any stake in the club. We have not received any offer and we will not entertain any offer.

“Our ambition for Arsenal remains to compete to win the biggest trophies in the game and our focus remains on improving our competitiveness on the pitch to achieve this.”

The Kroenkes’ statement follows days of speculation surrounding the future ownership of the club after Ek, a life-long Arsenal fan, threw his hat into the ring when thousands of Arsenal fans protested against the owners following the collapse of the proposed European Super League.

Ek had also intimated he would be open to having fan representation in the board room.

He is understood to be totally serious about the deal and has the funds to make it happen. According to Forbes, he is worth £3.38billion (€4.7billion), and was named the most influential person in the music business by American magazine Billboard in 2017. 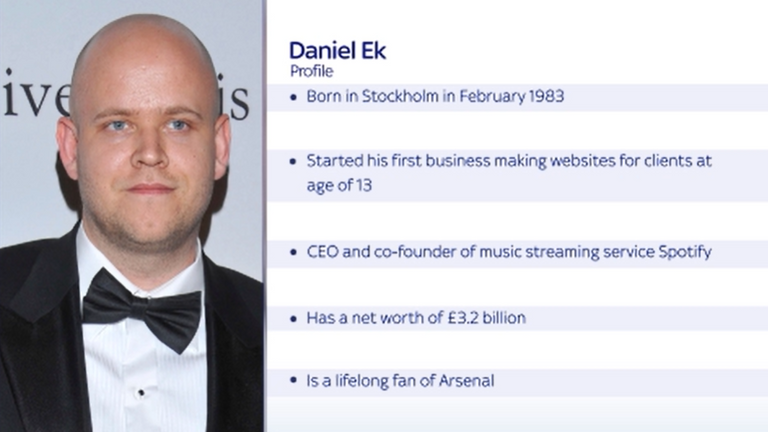 Ek is expected to speak for the first time on Wednesday afternoon (1450 BST) about his plans to buy Arsenal, in an exclusive interview with the CNBC business channel.

While he is primarily doing the interview to talk about Spotify’s quarterly results, he is expected to confirm his intention to begin negotiations with the Kroenke Sports and Entertainment (KSE) in the coming days.

Tags: an, Arsenal, Kroenke, owners, Stan
You may also like
Latest Posts