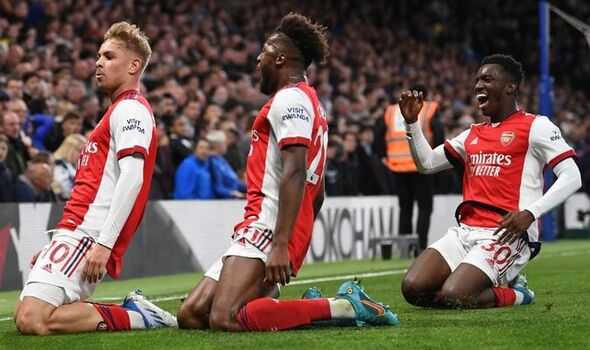 Arsenal produced their biggest performance of the season when it really mattered as they kept their top-four hopes alive with a crucial 4-2 win on the road at Chelsea. Goals from Eddie Nketiah (2), Emile Smith Rowe and Bukayo Saka secured a priceless win for the Gunners after three straight defeats. Here’s how Mikel Arteta’s players rated at Stamford Bridge, where an excellent second-half display earned them all three points….

Questionable for Timo Werner’s opener, despite the deflection. Looked a little shaky at times.

Not his best night despite the victory. Was seemingly fouled before Chelsea’s equalised but wasn’t given.

Cleared the ball straight back into danger in the second half. Won’t be overly bothered by his performance.

Headed one off the line in the first half. Generally cleared his lines when required and put his body on the line.

Looked nervous on his return. Started the second-half very poorly but did what he had to do at the heart of defence. Made a vital interception from Werner’s low cross with five minutes to play.

Much improved following his recent struggles. Suited to the wing-back role. Went of several marauding runs up the pitch. Fired a good chance into the crowd.

Nutmegged his way out of trouble to set up the second goal. Great shift from the Swiss international.

Solid shift from the Egyptian. Did not put a foot wrong.

Tormented Marcos Alonso at times down the right flank. Decision-making was right on point. Won a penalty and converted confidently after being wrestled down by Cesar Azpilicueta.

Bundles of energy and took his goal brilliantly. Could have had more in truth but his mazy dribbles were a real problem for Chelsea. Unlucky to be subbed.

Ran his socks off with a captain’s performance. His creative flair and confidence was really handy in getting Arsenal up the pitch.

What a statement performance from the young striker. He was a major goal threat all night and lead the line in expert fashion, showing Mikel Arteta exactly why Arsenal should be working harder to keep him.

He really showed Alexandre Lacazette, who has been poor of late, how it’s done.

Nketiah was a thorn in the Chelsea defence all night and made them pay with two clinical finishes.