Arsenal vs Spurs Match In Pics

Arsenal star Gabriel Jesus was in fine form both on and off the pitch on Saturday, leaving team-mate Granit Xhaka in stitches after handing the midfielder the Player of the Match award. Both players were on the scoresheet against Tottenham on Saturday afternoon to remain top of the Premier League.

Arsenal claimed bragging rights over their fierce rivals Tottenham at the Emirates Stadium, with their intensity and attacking style of play bearing fruit. Thomas Partey opened the scoring for the Gunners before Harry Kane levelled from the penalty spot after Gabriel fouled Richarlison inside the box.

Jesus and Xhaka were then on hand to extend the Gunners’ lead at the top of the table with goals, with the latter being awarded the Player of the Match trophy for his dominant performance in the centre of the park. As Jesus handed the award to Xhaka, he exclaimed: “I don’t know how!”

The pair then laughed amongst themselves as they walked away to the dressing room to reunite with their squad. Xhaka has turned his fortunes around at the Emirates Stadium and been out of the standout players in Mikel Arteta’s side, benefitting from his newfound licence to roam forward and be a presence in the final third. 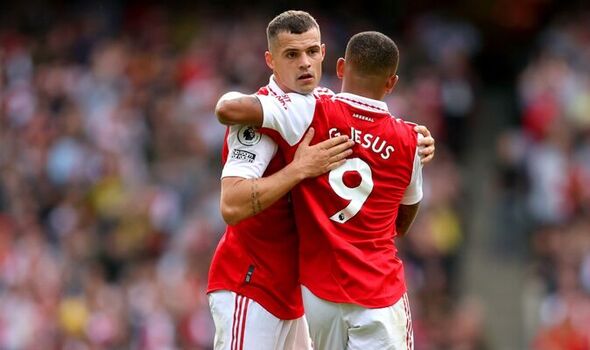 Speaking after the match, the Switzerland international told BT Sport: “My first derby goal in England, more than happy to help the team. Most important thing is the team and individually, the class we have, so happy to win.

“We didn’t have a lot of weeks to prepare because of the national team break but yeah, we saw it in training that we’re ready and we know what we want. From the first second, I think we were the better team, after the goal we conceded struggling but this is part of football. The second half it was much better.” 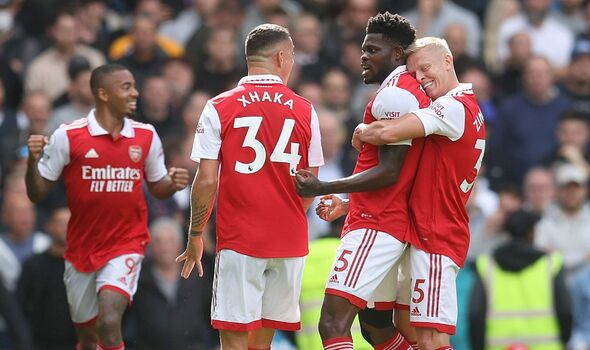 The emphatic victory over Tottenham, who were unbeaten so far this season, will certainly catch the eye of title contenders Manchester City and Liverpool. The arrival of Jesus has proved to be the final piece of the puzzle in the final third, with his fifth goal of the campaign rubbing salt in the wounds for Tottenham – who attempted to sign him from Manchester City over the summer.

Speaking about the goal, he added: “To be honest, it’s the second time I score in the derby game, the first was against Argentina. I’m very happy, I want to score every game but the way the team played from the first minute, we showed what we want in the game. We won, that’s the most important thing.”