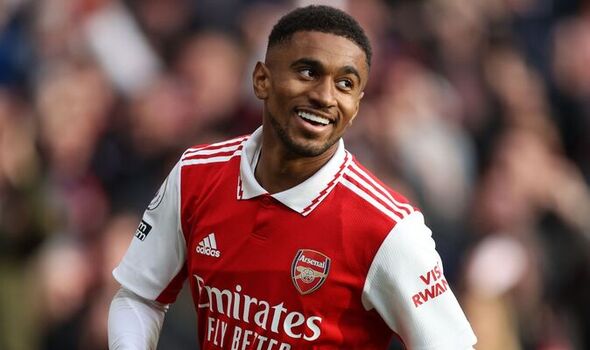 Reiss Nelson has vowed to track down the two bonkers Fantasy Premier League players that captained him against Nottingham Forest – having not played a single minute in the top-fight this season. The 22-year-old winger was the star of the show after replacing the injured Bukayo Saka as Arsenal thumped Steve Cooper’s side 5-0 at the Emirates Stadium.

Nelson has had a rough ride with injuries having spent last season on loan at Feyenoord but now he feels ready to prove his worth under Mikel Arteta.

The former England U17 World Cup winner scored twice and registered an assist as the Gunners ran riot against the Premier League new boys and now there is confidence Nelson could finally make the grade in north London.

Incredibly, the surprise of everyone including Nelson, two FPL players had placed their faith in the attacker with the captain’s armband, which saw them take home a whopping points haul of 38.

The revitalised youngster netted 19 points – including three bonus – for his five-star performance against the Tricky Trees and could now give FPL managers something to think about moving forward, particularly if Saka is carrying an injury.

Nelson is now keen to get in touch with the two FPL managers that made his day extra special, writing on Twitter: “You got no idea how much I rate! How can I find out who did this? I’d love to give them a shirt!”

Arsenal boss Arteta was full of praise for the former Hoffenheim loanee after the match, telling Viaplay: “He causes a problem every day because he’s really pushing, he has matured and evolved as well as a professional and a player.

“He is someone we really like in the group, not only me but all the staff and players as well, and you could see the reaction when he scored a goal.”

The Gunners now face FC Zurich in their Europa League group decider on Thursday and Nelson could be in line for more minutes.

After that, Arsenal travel to Chelsea on Sunday looking to continue their excellent start to the Premier League season as Nelson looks to nail down a starting berth.

Arsenal had been looking to sign another winger in the transfer window but Nelson’s unlikely revival could provide technical director Edu with some food for thought ahead of January.

“The big thing for him is he can’t allow this to be just another moment,” the former Manchester United and England defender said on his YouTube channel. “This has to become, not the norm, scoring two, but the norm in being relied upon in Arsenal’s setup.

“He needs to be the go-to guy when, if a Saka or [Gabriel] Martinelli aren’t fit, or if they’re out of form, or if the game’s not going well, then all of a sudden he’s pushing to be a starter in this team. Because his potential, as a kid, that’s what he was meant to be.

“But he has to go on now. It can’t be that you’ve had this moment now and celebrate it and we don’t see him again for another year and he goes on a couple of loans.”

Forest boss Cooper, who was one of the first to embrace Nelson after the game, was full of praise for his former player despite the one-sided drubbing.

Cooper said: “Reiss and I always had a strong relationship. He was a standout player for England U17s. It’s good to see him doing well, I just wish it wasn’t today.