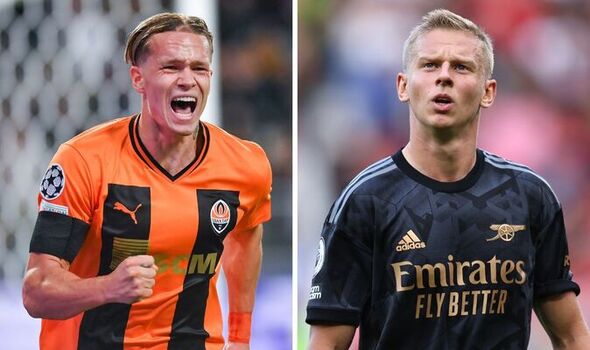 Former Arsenal striker Kevin Campbell believes Mykhaylo Mudryk will be ringing compatriot Oleksandr Zinchenko to try and secure his dream move to north London. The Shakhtar Donetsk winger has taken the Champions League by storm this season after catching the eye in last season’s competition and now a big move to the Premier League looks a matter of when not if.

Mudryk has captured the attention of several top-flight clubs – not least Arsenal who were linked with a late move in the final stretches of the summer window.

The Gunners did not firm up their interest though, although Mudryk was the subject of offers from Brentford and a £25million verbal proposal from Everton that was rejected out of hand.

He has continued his electric form this season, netting in both of Shakhtar’s Champions League matches against RB Leizpig and Celtic while also assisting twice.

In the view of Campbell, he has what it takes to play for Arsenal and furthermore, the forward will be doing his best to make the transfer happen behind the scenes. 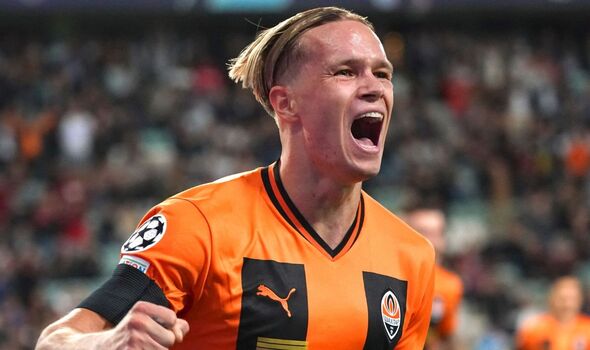 “I like him. I’ve seen a few games of his. Not a lot. But whenever I’ve seen him, he’s looked lively, he’s looked good. Young lad, very gifted,” Campbell told the Highbury Corner.

“I truly believe he is the right profile for Arsenal. He seems to have a great attitude. Again, I think he likes Arsenal. Obviously, his (international) captain’s at Arsenal.

“So he’s probably ringing Zinny and saying ‘speak to the manager, get me over there’. He’s doing pretty well for himself at Shakhtar. He’s looking the part.

“Now he’s been linked to Arsenal, everybody’s watching him. I’d like Arsenal to have all the weapons. So no matter what, we could chop and change, and we’re still strong.”

Mudryk himself has made no secret of the fact that he would jump at the chance to join Arsenal, stating: “My dream is to play in Premier League, of course.

“Arsenal is a very good team, very good manager – so from my side, I can’t say no to Arsenal!”

Shakhtar Donetsk chief Darijo Srna, who was a staple at the back for the Ukrainian side and the Croatian national team, knows his side are set for a big payday when they finally sell the highly-rated winger.

“We received an offer of €30million [from Everton],” Srna said.

“And when our president doesn’t sell a player for €30million, especially in such difficult times, he is sending a message to everyone that he wants to progress in the Champions League and to win the championship.

“Mudryk is a serious talent. After Kylian Mbappe and Vinicius Jr, he’s the best player in Europe in his position. If someone wants to buy Mudryk they must spend a lot, a lot, a lot of money and respect our club and our president.”

Arsenal were looking for another wide player in the final days of the summer transfer window but several of their key targets proved to be out of reach.

Wolves valued Pedro Neto at £50m, which priced out of a move and instead or pursuing other names, the club decided to launch a swoop for Aston Villa midfielder Douglas Luiz.