Bernd Leno – 8. The German didn’t make a save in the first half, although he appeared to be beaten by Mount’s free-kick. He could do little about Abraham’s goal but made a brilliant stop to deny Jorginho’s late penalty.

Rob Holding – 6. He was sloppy at the back, and almost teed up Werner early on. Improved immensely in the second half.

Pablo Mari – 7. The Spaniard, making his first league appearance for the Gunners this season, filled in well and didn’t look uncomfortable or out of place. Booked for a cynical challenge on Kovacic.

Kieran Tierney – 7. The Scot forced his way into the area to win the penalty – even if it was harsh on James – and he defended brilliantly.

Hector Bellerin – 7. He was very unlucky to not pick out Smith-Rowe, and got forward well throughout.

Mohamed Elneny – 6. He did his job, and I think from an Arsenal perspective that is an absolute win.

Granit Xhaka – 7. He made yet another clumsy challenge in a dangerous area of the pitch for the Mount free kick, but my word his free kick was exceptional. Clumsy fouls and the occasional screamer – you really know what you’re getting with the Swiss midfielder.

Bukayo Saka – 8. Like the fellow young stars, Saka worked tirelessly and his cross – which found the top corner – was the luck Arsenal have been missing this season.

Emile Smith-Rowe – 8. The young starlet certainly put in the tireless effort Mikel Arteta wanted, and was incredibly unlucky to not give Arsenal the lead. His willingness to pass the ball forwards made a noticeable difference.

Gabriel Martinelli – 7. The Brazilian has been injured for so long, and Arsenal fans will be smiling that he is back. A fine performance from the forward.

Alex Lacazette – 9. He held the ball up well, and took the penalty excellently, sending Mendy the wrong way. The French striker dropped deep to play through balls and release the wingers, playing the role to near-perfection. 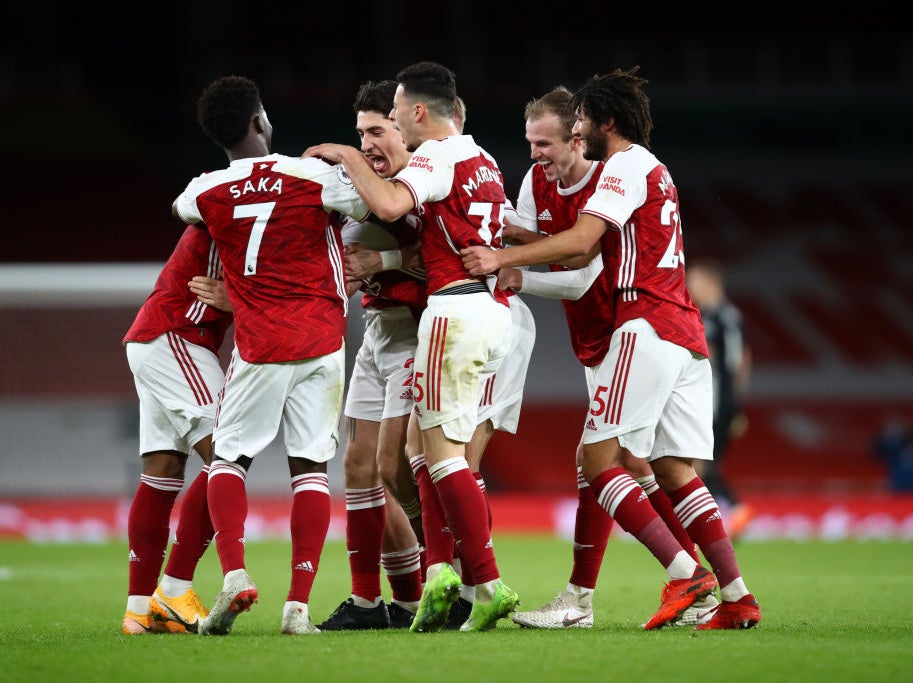 Eduoard Mendy – 7. The summer signing could do very little about the penalty, Xhaka’s free kick or Saka’s goal. He did make a fine save to deny Martinelli and Arsenal a fourth, and made up for his error by saving from Lacazette later.

Reece James – 6. He was the best player for Chelsea in the first half, and was unlucky for the penalty. His influence waned in the second half, and he was more suspect defensively.

Kurt Zouma – 6. Chelsea’s central defenders could do little about the goals, but like Silva, he couldn’t deal with Lacazette’s movement.

Thiago Silva – 6. The Brazilian didn’t struggle aerially, but he was caught out by Lacazette’s movement and willingness to drop deep.

Ben Chilwell – 5. The left back has been sensational at many times this season, but tonight was not one of those nights. He was dominated by Saka, particularly in the second half.

Mateo Kovacic – 5. The Croation was incredibly quiet and even when he was in possession, he was dominated by  Xhaka and Elneny.

N’Golo Kante – 6. He worked hard as always, but this just wasn’t Chelsea’s night.

Mason Mount – 6. The English midfielder’s free kick went agonisingly wide, and that was just about his only contribution.

Timo Werner – 5. Once again, he was underwhelming. When will the goals come?

Christian Pulisic – 7. The American got forward well and offered plenty of crosses – but without Giroud, should that have been the plan?

Tammy Abraham – 5. Struggled to lead the line, both on the ground and in the air before scoring late.

Tags: Arsenal, Chelsea, pla, result, vs
You may also like
Latest Posts