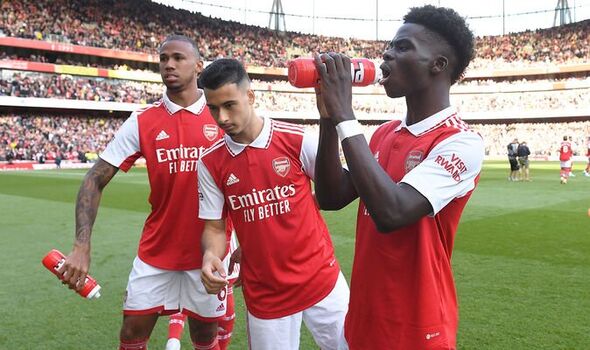 Arsenal would lessen the burden on Bukayo Saka and Gabriel Martinelli if they sign PSV Eindhoven star Cody Gakpo. The Gunners were linked with the Dutchman in the summer and could launch a move in January.

Gakpo is one of the top performers in Europe so far this season. He has already registered over 20 goal contributions for PSV after enjoying the best campaign in his career last term.

Arsenal were keen on signing a winger in the summer, with Wolves star Pedo Neto a top target. But Gakpo could now be high on the agenda for Mikel Arteta.

That would lessen the workload on both Saka and Martinelli. The duo have started every Premier League match so far this season.

They have also featured regularly in the Europa League due to Arteta only having a small squad to choose from. Gakpo’s versatility means he can play across the frontline, giving Saka and Martinelli the opportunity to rest when needed but not decrease the quality on the pitch.

Sky Sports reporter Dharmesh Sheth says Arsenal are interested in Gakpo but suggests a summer move for the £38million-rated star would be more likely. He said: “Arsenal is an interesting one, because, throughout the transfer window, I think the right side of the attack was a priority position.

“Now, Gakpo’s priority position, and preferred position, is on the left, but he can play in the centre and he can play on the right. At the moment, Saka’s occupying that right side of the front three just now.

“He would be someone that Arsenal would look at. I think it would fit the profile as well, as far as Arteta is concerned, because we know what he’s trying to build a squad of young players who’ve got high ceilings and high potential so it could be one that Arsenal do look at in January, potentially, but the summer is more realistically.”

Saka has featured in each of Arsenal’s last 50 Premier League matches, starting 50 of them. He only turned 21 last month but Arteta recently said he needs to get used to playing every three or four days.

The Spaniard said: “Look at the top players in the world, they play 70 matches and [play] every three days and make the difference and win the game. You want to be at the top, you have to be able to do that.

“If we start to put something different in the minds of our young players I think we are making a huge mistake because then it’s one yes, one no, now I don’t play, on astroturf I don’t play, I don’t want that.”