Arsenal and Brazilian football have, at times, been seen as two of the greatest ambassadors of the beautiful game.

The iconic free-flowing football the Gunners implemented under Arsene Wenger and Brazil’s famous attacking flair certainly earned supporters far and wide. And on occasion fans have been lucky to see the two merge, with 15 Brazilians having joined Arsenal over the years.

Yet the union has not always been fruitful as many of Brazil’s stars have failed to leave a lasting impression in north London, while others have been complete flops. Daily Star Sport brings you the definitive list of Brazilian Gooners, from club legends to horror signings, ranked in order of success…

Gilberto joined the Gunners in 2002 off the back of a World Cup win with Brazil. He had a lot to live up to playing alongside captain Patrick Vieira, but quickly cemented his position as one of the finest defensive midfielders in the world.

His reading of the game and tackling were an integral aspect of the undefeated 2003/04 season which saw him go down in Arsenal folklore as an ‘Invincible’. Gilberto won two FA Cups and even scored the first ever goal at The Emirates stadium during his sensational six-year spell.

Who is your favourite ever Brazilian Arsenal footballer? Let us know in the comments section.

The suave suit-wearing technical director played alongside Arsenal’s very best after joining in 2001. He overcame personal hurdles such as the tragic death of his sister and injury to become a well-respected member of the Invincibles.

While he wasn’t necessarily the first name on the team-sheet, Edu brought valuable depth to arguably the greatest Arsenal squad ever and helped the likes of Gilberto settle in off the field. He made 79 league appearances and won two league titles, including a domestic double, before leaving for Valencia in 2005.

Arsenal’s most promising player in recent times. Martinelli was an unknown talent when he was signed from the Brazilian fourth tier as a teenager in the summer of 2019.

He quickly made an impression, scoring 10 goals across all competitions in his first season. After facing injury struggles, the forward is now expanding his game and aiming for more consistency under Mikel Arteta ahead of his fourth season in England. Another recent Brazilian signing to pay dividends, the 24-year-old has become a regular starter at the heart of the Arsenal defence. Having joined in 2020, fans were unsure of what to expect from the £27million Lille centre-back.

But he has brought solidity to the backline along with a powerful presence reminiscent of the likes of Sol Campbell. The only thing holding Gabriel back from challenging the legendary Brazilians on the list is his lack of silverware.

The Brazilian left-back was unlucky enough to just miss out on two of Arsenal’s greatest accomplishments – the ‘98 and ‘02 domestic doubles. He was signed as the ageing Nigel Winterburn’s replacement in 1999 but was displaced by an emerging Ashley Cole in his second season, after which he left for Celta Vigo.

While his best years came later at Barcelona in the form of three La Liga titles and two Champions Leagues, he will always be remembered for being the Gunners’ first ever Brazilian player.

No other player on the list boasts four Premier League trophies. And while those came at Manchester City and not Arsenal, it is enough to place the £45million striker high up on our rankings as a star signing.

Jesus at 25 still has his best years ahead of him and there is a sense the forward can go on to be the main man that Arsenal were lacking all too often last season.

The fact Jesus' scintillating pre-season form already puts him above most other Brazilian players says more about Arsenal's recruitment down the years. Nevertheless, expect to see him ascend several more places as he brings samba style to the Emirates in 2022/23. Shock. Horror. Why is David Luiz so high up on the list you ask? Well, the defender was certainly not without his trademark moments of head-loss during his two seasons in north London. He notably received straight reds for clumsy challenges in big games against Chelsea and Man City while setting the record for most penalties given away in a single season (five).

Nevertheless he was a free agent who brought crucial experience to a relatively useless Arsenal defence deep into their Unai Emery-early Mikel Arteta banter era. Arsenal fans were eventually rewarded for their patience as Luiz starred in the 2020 FA Cup final victory against Chelsea and even scored a penalty to win the Community Shield shootout against Liverpool.

Arsenal were handed a huge blow when the brilliant Jose Antonio Reyes sought a move away to Real Madrid in 2006. They looked to soften that blow by agreeing a one-year loan with Real which would see striker Julio Baptista traded to the Emirates side.

He struggled in front of goal in the Premier League but managed 10 goals in 35 appearances across all competitions during his loan, including four against Liverpool in the League Cup and two against rivals Tottenham in the semi-final.

His six League Cup goals amounted to nothing as Arsenal lost to Chelsea in a fiery final, before the disappointing Galactico returned to Spain.

The centre-back was eyed as a huge talent by Arsene Wenger when he arrived in 2015 from Villarreal. Comparisons to Martin Keown were fair with regards to his no-nonsense approach to defending and slightly wild streak.

But his performances weren’t good enough to cement him as a regular starter and he left in the summer 2017 for Valencia. 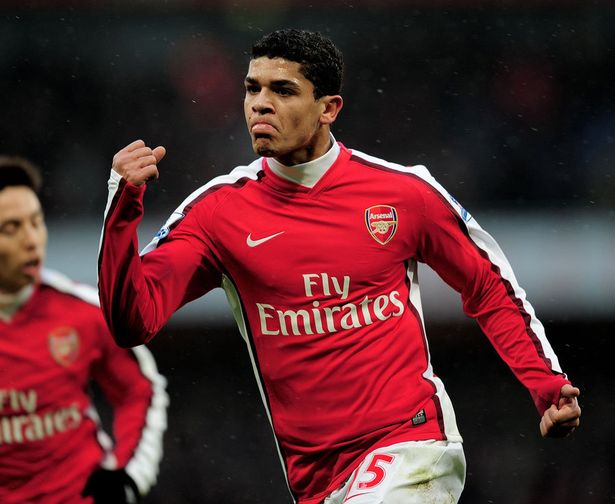 Some fans might have been expecting the 2002 World Cup-winning winger when they heard Arsenal had signed Denilson in 2006. Instead, it was a teenager signed from Sao Paulo for £3.4million, who turned out to be well below the standard set by other Arsenal midfielders of the era.

He had a clear run to the first-team after the departure of Gilberto and Mathieu Flamini in 2008 but couldn’t adapt to the fast and physical nature of English football. Denilson has since revealed he struggled to settle into life in England due to the weather and the distance from his family.

The marauding left-back arrived in north London back in 2011 after one of Arsenal’s most chaotic transfer windows. Santos, Alex Oxlade-Chamberlain, Mikel Arteta, Gervinho, Carl Jenkinson and Per Mertesacker were all signed to boost Arsene Wenger’s squad after the departure of several key players.

Unfortunately for Santos, he was comfortably the worst of the bunch as he arrived unfit and tactically out of his depth. In notoriously comical scenes in 2012, Santos epitomised his horrendous time at Arsenal by asking for the traitorous Robin van Persie’s shirt at half-time while his team were losing at Manchester United.

There was no coming back from the incident as Gooners branded him a “joke” and a “fool” on social media.

A great FIFA 12 prospect who never made an impression in north London. Wellington Silva scored in his reserve game debut against Manchester United after being signed from Fluminense for £3.5million.

He continued to impress in friendlies but wasn’t awarded a work permit by the FA until five years later in 2015. It undoubtedly got in the way of the winger's development as he was sent out on loan to Portugal, Spain and even Bolton, before returning to Fluminense without making a single senior appearance for Arsenal.

The only player to finish lower on the list than someone who didn't make an appearance is Willian. From the very moment news broke of the 32-year-old being signed on a three-year deal in 2020, fans knew the move was destined for failure. After all, ex-Chelsea stars Petr Cech and David Luiz had hardly set the Emirates alight.

Willian looked sluggish, unbothered and completely finished at Arsenal, scoring just one goal in 37 appearances before cutting his contract short and leaving after a season he described as “the worst time”.

The ex-Sao Paulo winger is yet to make an appearance for the Gunners, having been signed for £3million ahead of the 2022/23 season.