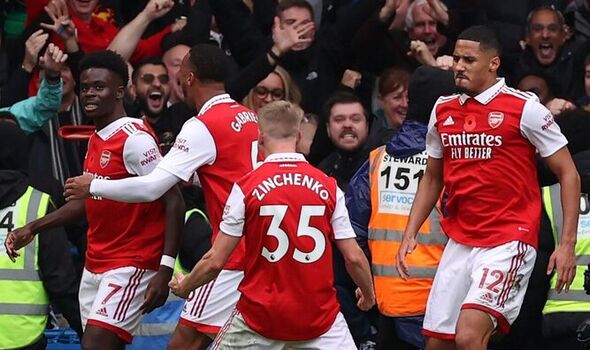 Arsenal moved back to the top of the Premier League table with another big win over a top-four rival as Gabriel’s goal helped them pick up all three points against Chelsea. Express Sport picks the best and worst players from Mikel Arteta’s side.

It seemed as though White was shoehorned into a right-back position at the start of the season due to Takehiro Tomiyasu’s injury. But he’s keeping out the Japan international by merit and he frustrated Chelsea down their left wing.

Mason Mount and Kai Havertz both came unstuck when charging down White’s side and the Arsenal star looked a threat going forward. However, it was facing his own goal where White was at his best, sweeping up things when Saliba and Gabriel are beaten and must be on the verge of a spot in England’s squad for the World Cup.

Gabriel Jesus, Bukayo Saka and William Saliba may often grab the headlines for their performances but skipper Martin Odegaard is growing into his captaincy with every performance. The Norwegian may not be the most vocal, but he leads by example in attack and was a constant pest for Chelsea’s defensive midfielders.

Jorginho struggled to keep track of Odegaard’s movement and if Arsenal were more clinical in the final third then he would have picked up at least one assist. Another solid stint by the 23-year-old and the only thing missing from his game is goals. But if he keeps playing like this then Arteta will be patient.

Hardly any strikers have enjoyed any freedom against William Saliba and the Frenchman had Pierre-Emerick Aubameyang in his pocket all day. A slight slip midway through the second half gave Aubameyang half a chance, but Saliba was immediately back to remedy the situation.

He was a constant threat for Arsenal from set-pieces and it was his involvement at the front post for Saka’s corner than largely stopped Chelsea being able to clear it before Gabriel tapped in. It’s a formidable partnership he’s created alongside Gabriel and no Premier League attackers will enjoy playing against either of them.

While nobody in particular had a terrible game for Arsenal, by Gabriel Jesus’ own high standards he would have wanted to do more against Chelsea.

He struggled to compete against Thiago Silva and had limited touches inside Chelsea’s box. It’s now a month since Jesus’ last Premier League goal and he’ll want to end that run against Wolves next weekend.

Similar to Jesus. Martinelli will want better from himself in the bigger games.

The 21-year-old is seen as one of the brightest young talents in the Premier League and already has five goals this season, including a star performance in the 3-2 win over Liverpool. If Martinelli is on his game, Arsenal are extremely hard to beat and would have been out of sight if the Brazilian was at his best against Chelsea.