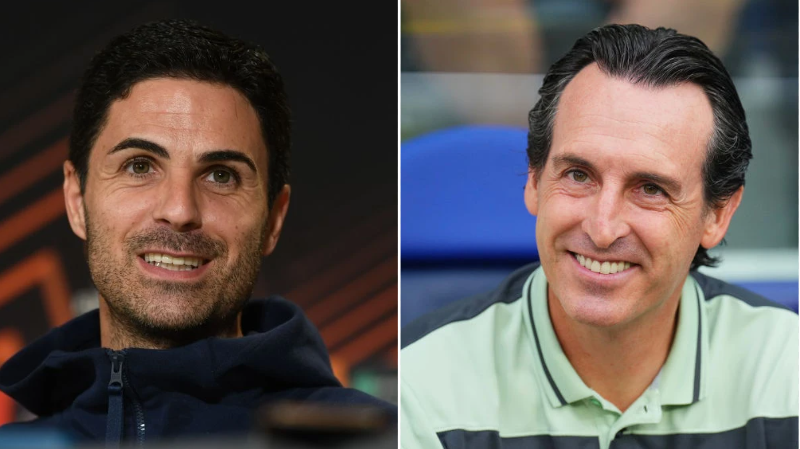 Arsenal manager Mikel Arteta is full of admiration for former Gunners boss Unai Emery as he returns to the Premier League with Aston Villa.

Emery was Arteta’s predecessor at the Emirates, spending just 18 months in north London before being dismissed in November 2019.

It was a tough time in Emery’s career, which has seen him win titles with Sevilla, Paris Saint-Germain and move on to lift silverware with Villarreal before returning to England.

Arteta is a fan of his compatriot and is impressed with what he has done over his managerial career which dates back to 2004 and has taken in four countries.

‘Talking about Unai coming back to this league, what I feel about Unai is admiration,’ said Arteta.

‘If you look at his curriculum, what he’s done in the different countries he’s been, how he’s adapted, what he’s won, I think he deserves a lot of admiration and respect for what he’s done.’

While Arteta followed Emery, it was a much tougher act to follow for Emery as he came after the legendary Arsene Wenger.

The current boss admits that he has had an easier task than his predecessor on that front.

‘I think there are certain eras that you know are going to last forever and we’re always going to be the coach or the person that was trying to succeed and try to take a lot of the things he left and the legacy he left for this football club,’ he said.

‘Looking back, probably yeah it was helpful [not being the man directly after Wenger]. I don’t know. Hopefully yes, hopefully it was the right call.’

Emery will take charge of Aston Villa for the first time this weekend when they take on Manchester United at Villa Park, coming off a 4-0 loss at Newcastle.