Free match highlights and report as three goals in nine second-half minutes from sub Trezeguet (2) and Ollie Watkins turn game on its head; Aleksandar Mitrovic had given Fulham the lead after Tyrone Mings error; Fulham now three points off Newcastle having played a game more

Aston Villa scored three late goals in nine minutes to fight back from a goal down to beat relegation-threatened Fulham 3-1 at Villa Park, denting the Cottagers’ survival hopes.

In a first half lacking in chances, Villa had a penalty overturned in stoppage time as Mario Lemina looked to have clipped Ollie Watkins, but Andy Madley spotted a touch from the Fulham man after being advised by VAR to go to the pitchside monitor.

Tyrone Mings’ fluffed backpass allowed Aleksandar Mitrovic to open the scoring for Fulham, rounding Emi Martinez before slotting into an empty net (61) for his first goal since September.

But Trezeguet, subbed on directly after Mitrovic’s goal, turned the game on its head with two goals in three minutes, the first a cool finish from Mings’ centre (78) before converting at the back post from fellow sub Keinan Davis’ delivery (81).

Watkins rounded off the win with a close-range finish from Bertrand Traore’s cross late on (87), giving Villa three points that had seemed so unlikely late in the second half.

The result means Fulham are three points behind 17th-place Newcastle, having played an extra game, while Villa are back into the top half, five points off the top seven.

Man of the match: Trezeguet

How Villa turned game on its head from nowhere

Fulham knew a win could take them out of the drop zone on goal difference following Newcastle’s draw with Spurs earlier on Super Sunday, with Mitrovic causing a nuisance early in the first half.

The big news for Villa was that Jack Grealish remained out despite Dean Smith saying last week he was hopeful the skipper would take part today. Smith said before the game that Grealish had felt discomfort in training on Saturday.

Villa made just one change from the 2-0 defeat by Spurs a fortnight ago, with El Ghazi coming in for Trezeguet.

Fulham made three changes from the 2-1 defeat by Leeds before the international break; Tete came in for Robinson, Cavaleiro was replaced by Loftus-Cheek, and Mitrovic started in place of Maja after scoring five goals in three games for Serbia, his first start since early February.

He stung the hands of Martinez with a low effort early on, before forcing the Argentine into another diving save with a curling shot from just inside the box, as Fulham started brightly.

But the rest of the first half resembled a battle of defences as delivery after delivery, mostly from set pieces, came to nothing from both sides, before drama in stoppage time. Going down under the challenge of Lemina in the box, Watkins thought he had won Villa a penalty, awarded by Madley. But after VAR intervened, Madley went to the pitchside screen and spotted a slight touch by Lemina, overturning the original decision.

Villa didn’t have a shot on target in the first half for the fourth home game in a row, and only had themselves to blame as they gifted Fulham an opener. Looking for a simple backpass towards goalkeeper Martinez, Mings miskicked, allowing Mitrovic to take over, compose himself, before rounding Martinez and rolling into the empty net.

It was Mitrovic’s first goal in 22 Premier League appearances, having gone 45 shots without scoring, and his sixth goal in 12 days for club and country, having gone 159 days without a goal.

But Fulham were out of the relegation zone for all of 17 minutes as sub Trezeguet transformed the game. Over eight hours without a Villa player scoring, the hosts netted three in nine minutes as Fulham completely capitulated.

First, Egyptian Trezeguet finished coolly from 12 yards after Mings’ left-wing centre, slotting into the bottom left corner, the goal coming out of nowhere. 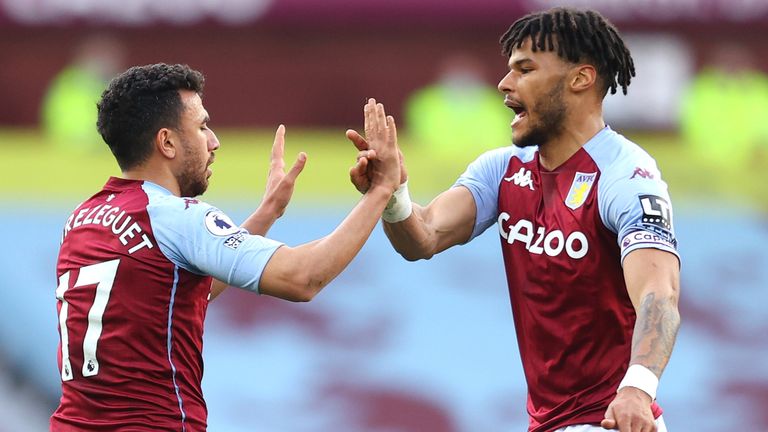 And Trezeguet got his second just three minutes later with another clinical finish at the back post from Davis’ lofted cross after capitalising on Tosin’s mistake.

Watkins followed up his debut goal for England with his 13th for Villa this season, and first in seven games, tapping home under a few yards out after fine work from Traore on the right of the box.

It was a game Villa had no right to get back into, with Scott Parker surely wondering how his side managed to throw away the lead and a dominant position. Villa, however, still have a faint chance of qualifying for Europe, but the sooner Jack Grealish returns, the better.

Aston Villa now go to Liverpool at 3pm on Saturday, live on Sky Sports Premier League, while Fulham host Wolves on Friday at 8pm in the Premier League.