Aston Villa manager Dean Smith has denied any bust-up with his assistant manager John Terry after the 2-0 defeat to Southampton in the Premier League on Saturday.

He said the speculation was ‘miles off the mark’ and ‘absolute bull crap’.

When pushed on the incident to give an answer he exclaimed: ”Give my answer – it’s bullshit.”

Rumours were in overdrive on social media after the result with a quote from Mark Regan of BBC West Midlands being circulated.

But the reporter quickly went on radio and denied he had said what was attributed to him. 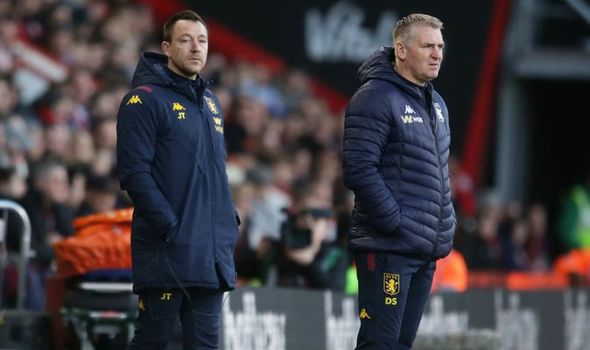 And the original tweet has since been deleted, indicating the incident may not have happened after all.

Villa struggled at Southampton and goals from Shane Long and Stuart Armstrong leave them just one point clear of the relegation zone.

West Ham and Watford could leapfrog Villa if they win against Manchester United and Liverpool later this weekend respectively.

Villa boss Smith tore into his side after their disappointing display against the Saints.

“We never laid a glove on them in the first 20 minutes,” he explained.

“I try to defend the players but today was not good enough. They were miles off it in the first half.

“A bit better in the second half. It was a game that could have been won but we didn’t create enough and didn’t defend enough. They were deserved winners.

“Jack Grealish got in behind them right from kick off and then they went long. They were getting shots and we were getting blocks. We can’t keep talking about getting good starts. Not starting well is a concern.

“We can’t play that bad again. It gave me a lot of heart seeing them against Tottenham but today was dreadful.

“The fight disappointed me in the first half. There was a bit more fight in the second half.

“I will take responsibility for the performance because I am the one who picks them.”