Aston Villa are confident they cannot be relegated if the Premier League season does not return due to the coronavirus pandemic. Premier League and EFL fixtures have been scrapped until April 3 at the earliest. The football calendar has been thrown into doubt with a number of clubs quarantining players due to coronavirus.

Express Sport understands Premier League clubs will meet later this week to discuss how to resolve the end of the 2019-20 season.

It has been suggested the current standings could be the final table, meaning Villa, Norwich and Bournemouth would be relegated, with Liverpool becoming champions.

However, according to The Athletic, Villa feel they cannot be relegated as it stands.

They add that Villa’s game in hand, against Sheffield United, causes further problems as they’ve played less than their relegation rivals. 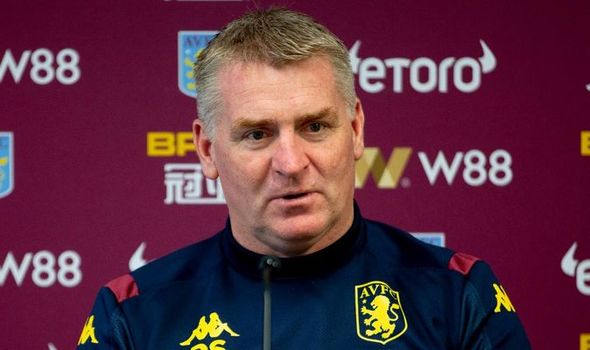 A lot has been made of the Premier League’s plans following the coronavirus outbreak, with West Ham vice-chairwoman Karren Brady saying the season should be scrapped.

She wrote in her column for The Sun: “Suspension or cancellation of the league was always a certainty.

“There is no dodging the possibility that all levels in the EFL as well as the Premier League will have to be cancelled and this season declared null and void because if the players can’t play the games can’t go ahead.

“The PL hopes that an interlude of three weeks from today will enable it to restart but that may well be dreamland.

“Perhaps scrubbing the European Championship could provide more time to complete the season into the summer but that is also a giant ‘if’.

“The issue is that medical advice is that for every day a player is in isolation he needs a day to recover his fitness.

“This on top of the issue that Covid-19 is so highly contagious the thought that everyone will be in and out of isolation and fit to play on April 4 seems so unlikely.

“So what if the league cannot be finished? As games in both the PL and in the EFL are affected, the only fair and reasonable thing to do is declare the whole season null and void.

“Who knows who would have gone down or come up if the games have not actually been played in full?

“A huge blow to Liverpool who might be robbed of their first title in 30 years.

“This will be discussed between the PL and the clubs next week at an emergency meeting.

“There are, of course, financial implications, wages and transfer debts must be paid and there is lost broadcast revenue, lost matchday income but this pales into insignificance as the health and well-being of everyone must come first.”