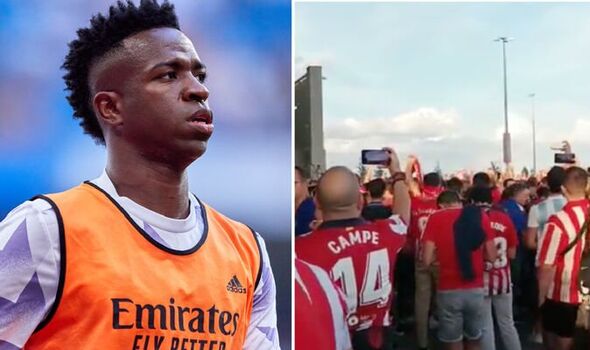 Video footage has emerged of Atletico Madrid supporters singing a sickening racist chant directed towards Real Madrid star Vinicius Jr ahead of the Madrid derby at the Wanda Metropolitano on Sunday night. The Brazilian will be firmly in the spotlight for the crunch meeting due to a story that has dominated headlines both in Spain and around the world leading up to the game.

The controversy started when Atletico Madrid captain Koke warned Vinicius to expect fireworks should he opt to dance upon scoring in the match – the winger’s trademark celebration.

The Spaniard said: “At the end of the day if he scores a goal and decides to dance it’s his call. To each his own and everyone celebrates the way he likes,” said Koke.

Before later adding: “There would be trouble for sure [if Vinicius dances], it’s normal.”

Then, Pedro Bravo, the president of the Spanish agents association, accused Vinicius of “playing the monkey” – comments that sparked outrage, most notably in Brazil.

The racist slur has prompted several of Vinicius Jr’s international team-mates to rally around the 22-year-old, telling him to dance freely if he does indeed find the net.

Now, shocking footage ahead of the match has emerged that appears to show Atletico fans collectively singing racist chants outside the stadium.