Arsenal star Pierre-Emerick Aubameyang has thanked the fans for all of their support after Thursday’s shock Europa League elimination by Olympiakos. Aubameyang looked to have set the Gunners up for a spot in the last 16 after scoring a stunning overhead kick at extra time, after the visitors had opened the scoring with Pape Abou Cisse’s header.

Season’s Not over yet. We’ll fight as a Team Till the end

However, Youssef El Arabi put the Greek giants back in the driving seat with his 119th-minute strike which left the entire Emirates in a state of shock.

The north Londoners threatened to fight back during the last few seconds of the tie but Aubameyang missed a sitter which meant Olympiakos went through via the away goals rule after winning the game 2-1 and drawing the tie 2-2.

Arsenal’s star striker was visibly devastated at failing to score but received a raft of positive messages from the fans on Instagram despite his critical miss.

The Gabon international thanked the Gunners faithful for their support and promised that he will bounce back in the Premier League. 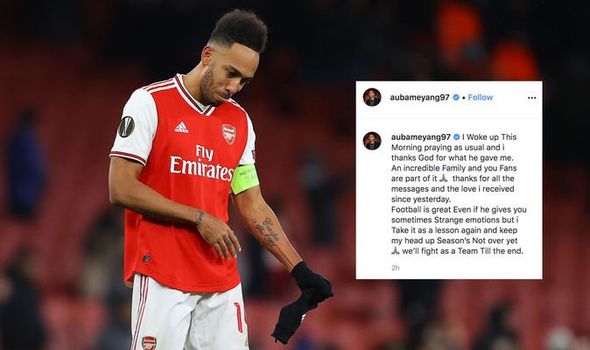 Aubameyang posted: “I Woke up This Morning praying as usual and I thanks [sic] God for what he gave me.

“An incredible Family and you Fans are part of it. Thanks for all the messages and the love I received since yesterday.

“Football is great Even if he gives you sometimes Strange emotions but I Take it as a lesson again and keep my head up.

“Season’s Not over yet. We’ll fight as a Team Till the end.” 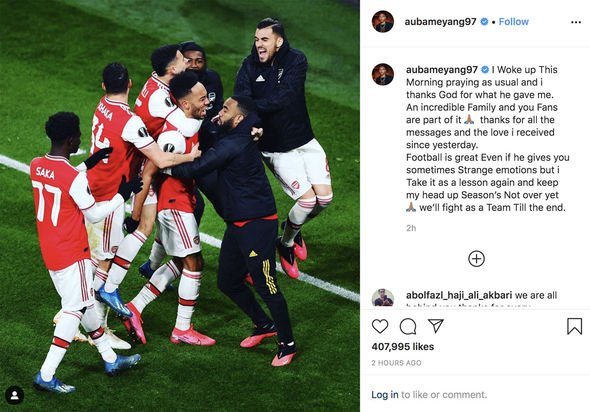 Aubameyang was very emotional after Arsenal’s loss to Olympiakos, which narrowed down their options for Champions League qualification.

The Gunners now need to finish in the top four of the Premier League table, where they are currently sitting ninth.

The Emirates outfit could also return to UEFA’s prestigious competition next season if they manage to finish fifth, depending on how Manchester City’s appeal over a two-year ban from the competition goes.

Aubameyang told BT Sport on Thursday after Arsenal’s elimination: “[I am] Very very disappointed. What can I say. It’s very hard, very tough.

“I think we missed putting some pace in the game, that cost us today.

“The last minute goal was unlucky for us. I don’t even know [how I missed that chance], I feel very very bad.

“But that can happen. I don’t know how I missed this chance. I was tired, I had some cramps but I had to score that goal.

“It was tough because they played very deep, it was hard to find the solutions in the final third. It was a really tough game and tough to find some space.

“We try to keep improving in the league and win as many games as possible and we’ll see what our chance to qualify is.”

Tags: autoplay_video, Pierre-Emerick
You may also like
Latest Posts