Barcelona will not be able to sign Erling Haaland until they sell Philippe Coutinho, according to reports from Spain. Haaland is Barca’s top target this summer but they cannot afford to sign the Norwegian unless they shift players out first.

Coutinho has struggled to display his true ability in a Barca shirt on a regular basis since his arrival from Liverpool just over three years ago.

He spent last season on loan at Bayern Munich and his future at the Nou Camp looked bleak.

But Coutinho was welcomed back into the Barca squad by new manager Ronald Koeman and he started this season strongly.

However, a rupture of the outer meniscus has seen the Brazilian not feature since December. 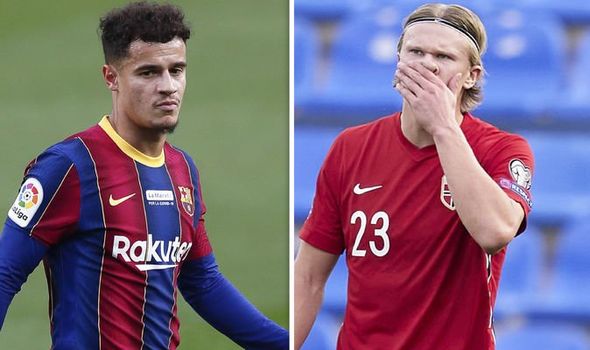 He is set to miss the remainder of the season with the injury.

Spanish outlet Marca claim Barca are unsure of what to do with Coutinho.

He still has two years remaining on the contract he signed after Barca agreed to pay Liverpool £142m for him in January 2018.

Barca president Joan Laporta has set his sights on signing Haaland from Dortmund.

But any deal would have to see money brought in for Coutinho, and other squad members, first.

Haaland is attracting interest from across Europe after a sensational first full season at Dortmund.

The 20-year-old has scored 33 goals in 31 appearances in all competitions for the German side this term.

Bundesliga expert and former Norway striker Jan Aage Fjortoft can see Haaland remaining at Dortmund for another season despite the likes of Barca wanting to complete a deal this summer.

Fjortoft told ESPN FC: “They could keep him if they wanted to keep him, because there is no reason, why should they sell him?

“At the moment if Dortmund sell Haaland they say goodbye to being a challenger, a serious top club.

“And also team Haaland could decide, even if they are fifth or sixth, to stay another year because they’ve always done that, to see what’s best for the player.

“To miss out on the Champions League for one season could be okay if you’re only 20 years of age.”