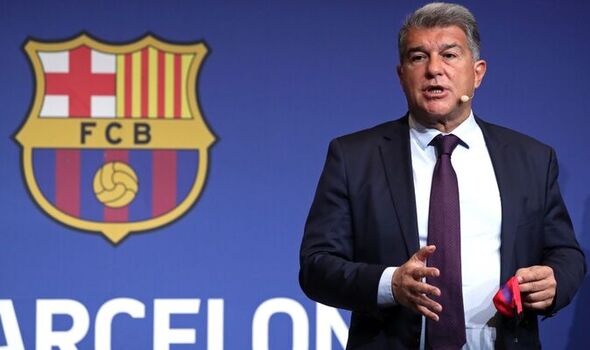 Barcelona president Joan Laporta has insisted that a section of the club’s fanbase – not the club itself – are to blame for almost 40,000 Eintracht Frankfurt supporters entering the Nou Camp in the Spanish side’s humiliating 3-2 Europa League quarter-final defeat last week. Laporta shirked responsibility for the ticket turmoil as he opened up on the findings of the club’s inquest into the debacle.

In a press conference specifically held to address the Frankfurt fiasco, Laporta explained: “I apologise to those involved who did not feel comfortable in the Eintracht match due to the strong presence of German fans. There was a misuse of the subscriptions by a group of socios, who gave their subscriptions to German fans. It’s sad and it will be subject to analysis.

“The control mechanisms on the website were outdated and insufficient. We have inherited this system from the previous board, we thought it could work, but we have seen that for big games it doesn’t.

“We understand that the club is not to blame for what happened, but the club is responsible… The club did not sell tickets to German fans.

“The conclusion is that the club has not sold tickets to the Germans, except for the 5,000 marked by UEFA, the VIP boxes and another 238 that went to the Germans due to a computer error that was quickly detected. Now we will do it match by match.

“Tickets will now be non-transferrable for non-domestic matches and high-risk games. We are working on other measures so that it does not happen again.”

Ahead of Barcelona’s shock 1-0 home defeat to Cadiz on Monday night, some of the club’s fans protested following the Nou Camp infiltration by thousands of Frankfurt fans last week. Some supporters called for Laporta to resign while the club’s ultras, the Grada d’Animacio (Animation Stand) group, who fill the section behind one of the goals, boycotted the La Liga match.

The supporters group labelled last Thursday’s invasion of away fans as “the greatest infamy at our home” and branded the episode “a social humiliation that we will never forget”. Barcelona boss Xavi was furious at the turn of events, condemning the situation immediately after his side’s 3-2 humbling.

The Spaniard stated: “Clearly the atmosphere did not help and the club is looking into why this happened. The players want to know why too. It was a clear miscalculation on our part. This cannot be allowed to happen. It was more like a final with the stadium divided.”