Ross Barkley is ready to banish the injury woes that have blighted his season with Chelsea and help Frank Lampard’s men consolidate their place in the top four.

Barkley scored a brilliant goal for Chelsea as they beat Premier League leaders Liverpool 2-0 in the FA Cup on Tuesday night.

And after struggling at times this season with a foot problem, Barkley is eager to reclaim his best form ahead of his reunion with Everton on Sunday. 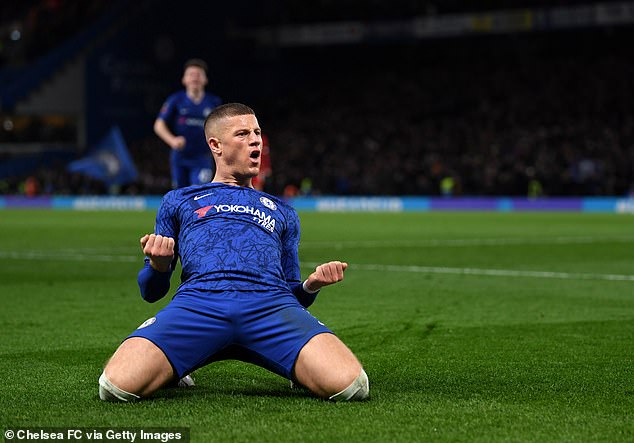 ‘I am feeling good, always positive,’ Barkley said. ‘I struggled with my foot for a while and since I have been free of pain I have been working hard, training well and doing what I can in games, trying to get a bit of rhythm game after game and now I am starting to feel good.

‘I am feeling good and ready to end the season really well.’

He mopped up in defence, threaded killer balls in attack – and even nutmegged Brazil midfielder Fabinho in a virtuoso coming-of-age performance.

Mateo Kovacic faces a nervous wait to discover the extent of an Achilles injury, while N’Golo Kante is still out with adductor trouble and Jorginho will miss the Everton match through suspension.

That could pave the way for Gilmour’s full Premier League debut this weekend, and Barkley has offered a ringing endorsement of the former Rangers youth star. 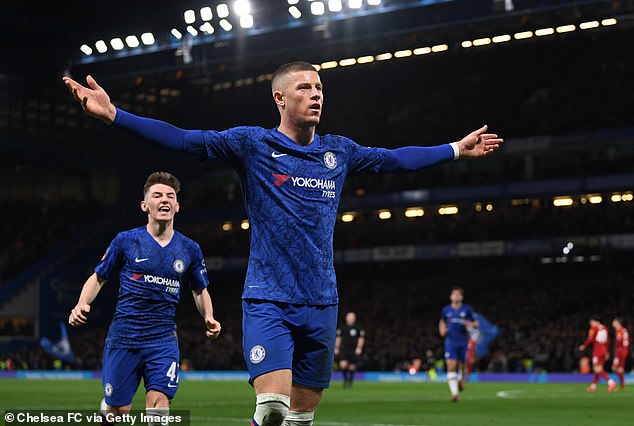 Asked if Chelsea can cope with all their absentees with Gilmour primed to step up, Barkley said: ‘Yes, because with injuries everyone has just got to be ready to take their chance.

‘It is about being ready in training, putting the extra yards in and being ready for your chance.

‘Billy was ready for his chance against Liverpool and he took it.

‘With injuries it gives opportunities for other lads to take and the manager is willing to put lads in, if you deserve the chance and play well you get in the team.

‘We work really hard, the players that say are on the bench, we do extra work all the time so we are always ready to help the side out when we need to.’

An Achilles concern for Willian could worsen the injury list for the Blues, who were also already without Callum Hudson-Odoi, Tammy Abraham, Christian Pulisic, Ruben Loftus-Cheek and Andreas Christensen on Tuesday.

Barkley drilled a bullet finish to cap a lightning counter-attack to seal Chelsea’s fine fifth-round win at Stamford Bridge, after Willian had opened the scoring.

Liverpool’s third defeat in four matches might usher in a mild sense of unease, but their 22-point Premier League lead still leaves a first top-flight title in 30 years a mere formality.

Ex-Everton star Barkley is itching to face his old side having shaken off a long-standing foot issue earlier this term, but took the time to underline still further the searing potential in youngster Gilmour.

‘For me it doesn’t surprise me; I see him doing it in training every day, he doesn’t have a day when he is struggling,’ Barkley said of his team-mate. 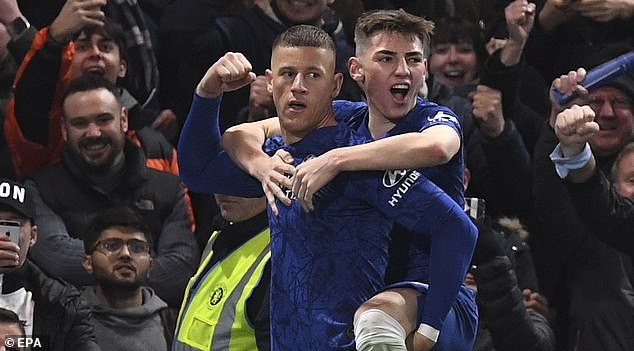 ‘For a young lad he is really mature with his ability on the ball, he makes the right decision most of the time. He is similar to Jorginho. He is a quality player and a good addition to the squad.

‘He recently moved into the first-team changing room with us and he’s settled in really well and long may it continue. He is always asking questions as well, which is a sign of a player that wants to improve and do well for the club.

‘I like him and the manager and coaching staff love him as well.’

Tags: Barkley, best, recapture, to, vows
You may also like
Latest Posts