Bayern Munich have released a statement saying they “disapprove” of Hansi Flick’s request to terminate his contract as head coach at the end of the season.

After several disagreements with sporting director Hasan Salihamidzic, Flick’s relationship with Bayern’s hierarchy has been tense in recent weeks. The 56-year-old’s contract runs until the summer of 2023.

Joachim Low will leave his position as manager of the Germany national team at the end of this summer’s European Championship and Flick has been one of the names linked with becoming his successor. “Yesterday (Saturday), FC Bayern head coach Hansi Flick made public his wish to terminate his contract, which runs until June 2023, at the end of the current season,” read a statement from the club on Sunday.

“Hansi Flick had informed the FC Bayern Munchen AG executive board of this wish during the past week.

“Hansi Flick and FC Bayern had agreed to place the focus on the matches against VfL Wolfsburg, Bayer 04 Leverkusen (20 April) and 1. FSV Mainz 05 (24 April), in order not to disrupt the concentration of the whole club on these three important matches.

“FC Bayern disapproves of the unilateral communications issued by Hansi Flick and will continue talks after the match at Mainz, as agreed.”

Flick, meanwhile, said after Bayern’s 3-2 win over Wolfsburg on Saturday: “I told the team today that I informed the club during the week after the game in Paris that I would like to get out of my contract at the end of the season.

“I just wanted to tell the team after the game today because I knew how difficult and important it is that I told the club.

“It was important to me that the team hears it from me because there is already one or two things about the rumour, but we have worked very well together for two years.

“I am absolutely thrilled with this team, with the attitude, with the quality and I am grateful to be able to accompany the team. And also a thank you to the club that there was the opportunity for me to coach such a team.” 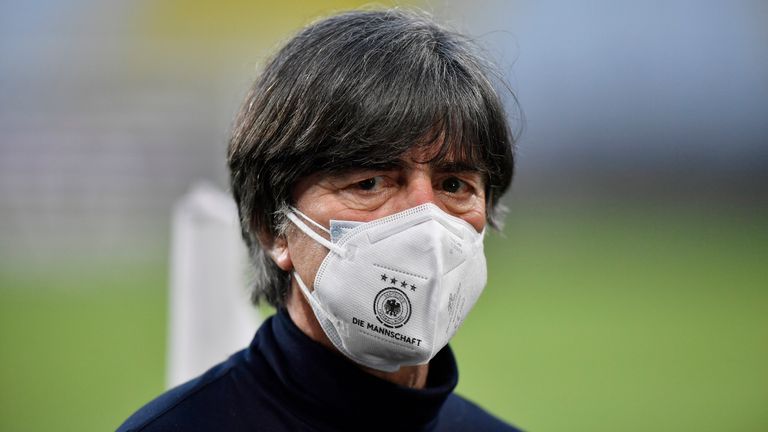 He added that becoming Germany’s new manager in the summer remains “an option”, but insists there has been no approach from the DFB (German Football Federation) or discussions yet about taking over from Low.

“The future is not clear at all and there has been no conversation with Oliver Bierhoff, because it was an important phase here,” he said.

“Of course, the DFB is an option that every coach has to think about, but, for me, it’s important to digest everything first, because the last few weeks weren’t easy for me either.”

Meanwhile, former Bayern midfielder and Germany international Lothar Matthaus has told Sky in Germany that Flick is top of the DFB’s shortlist of candidates of who they want to replace Low later this year, and contrary to Flick’s comments, believes he has already decided to take up an offer from the DFB.

Flick served as Low’s assistant manager from 2006 to 2014 and helped guide Germany to World Cup glory in Brazil seven years ago.

Since Niko Kovac departed the Allianz Arena in November 2019, Flick has excelled in his role as Bayern boss, winning six major trophies in an 18-month period.

The honours include the Bundesliga, the DFB-Pokal, the German Super Cup, the Champions League, the FIFA Club World Cup, and the UEFA Super Cup.

Bayern are seven points clear at the top of the Bundesliga with five games to play, but they were knocked out of this season’s Champions League at the quarter-final stage earlier this week at the hands of Paris Saint-Germain.

Matthaus: Bayern have Nagelsmann lined up

According to Matthaus, Bayern are already planning for Flick’s successor, with RB Leipzig coach Julian Nagelsmann identified as the man they want to come in.

“Munich have already chatted a bit with Nagelsmann, including about financial matters,” Matthaus told Sky in Germany. “Before the start of this season, Flick said that the coach should have a vote on new signings, which I think is right. As a coach, what am I going to do with players who I perhaps don’t want?

“I think it’s got too much for Hansi, and then the offer, the opportunity is there to become Jogi Low’s successor.”

However, Nagelsmann, 33, whose side are second behind Bayern in the Bundesliga, has denied any links with the Munich job and insists no contact has been made, adding that he intends to respect his deal with RB Leipzig.

“There were and there are no talks with FC Bayern,” he said. “I have no idea where Lothar got this information from. This of course also applies to my agents, there were no talks.

“I have not spoken to the club because there will be nothing to discuss. I still have a contract with RB until 2023.”

Tags: 'disapprove, Bayern, Munich
You may also like
Latest Posts