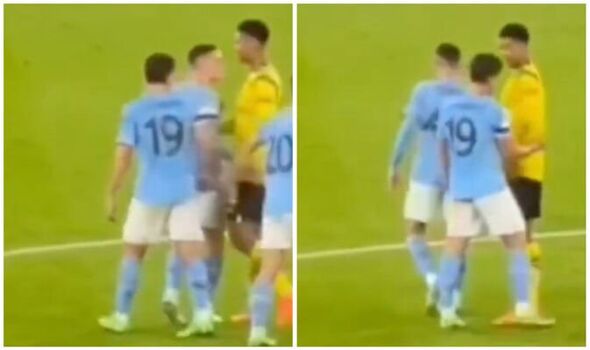 Jude Bellingham and Phil Foden came to blows during the Champions League tie between Manchester City and Borussia Dortmund – sparking suggestions that there could be lasting tension between the pair. A rash challenge from Foden on Bellingham early in the game set the tone for a feisty encounter and it has shown no sign of letting up since.

The latter reacted angrily to the overzealous challenge from Foden, pushing his international team-mate and exchanging words before the referee separated them. And it would appear that all is still not right with the two players after an awkward exchange at the final whistle at the Etihad Stadium.

Footage circulated on social media appeared to show the England international duo involved in a strange embrace. As both walked towards their opponents to shake hands, Foden and Bellingham met on the centre circle and neither appeared to be willing to let the argument die down.

Foden appeared to go for a hug with Bellingham by holding out his arms, but the feeling was not mutual as they almost collided with each other. Instead, Bellingham, 19, used his chest against 22-year-old Foden and nearly bumped the Man City starlet. 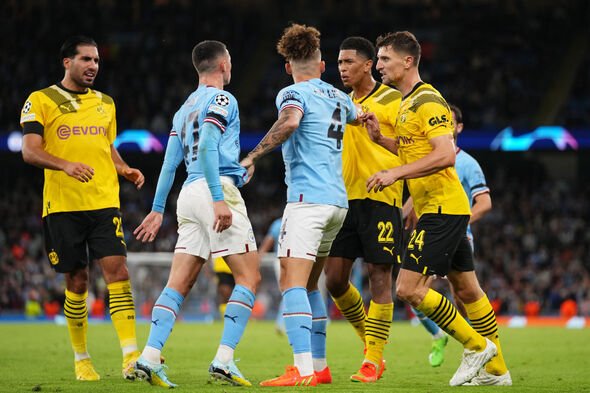 Foden, seemingly unimpressed by his compatriot’s refusal to make up after the game had finished, walked off looking unhappy and it is unclear whether they later met to clear the air. Bellingham, meanwhile, shared a warm reunion with his former team-mate Erling Haaland, who scored a stunning winner to make it 13 goals for the club this season already.

Bellingham had made an impression with his overall display in Manchester and handed Dortmund the lead with a clever header that caught Ederson by surprise. But City showed their mettle to turn the game on its head with two outstanding goals, first a piledriver from John Stones and then Haaland’s high volley.

A potential rift between two of England’s brightest young talents would hand Gareth Southgate an awkward scenario with the World Cup just over two months away. 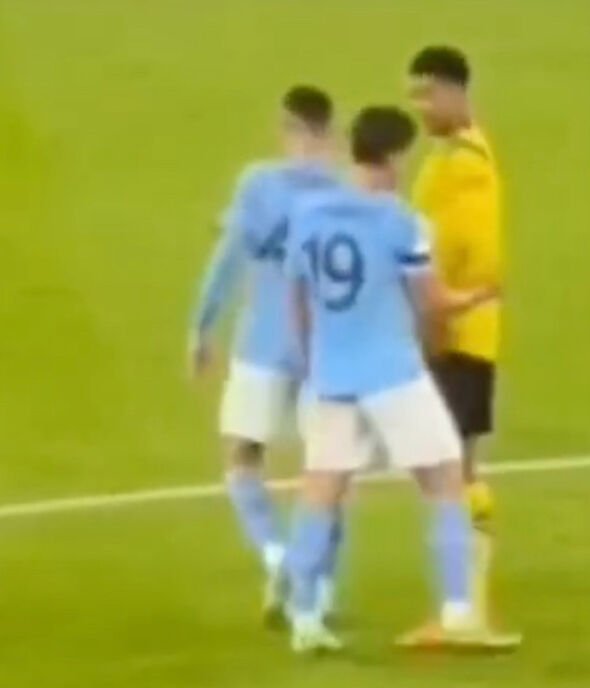 The Three Lions boss has named his squad for the UEFA Nations League matches with Germany and Italy on Thursday, with Bellingham and Foden included in the 26-man squad.

But it would resemble a dilemma for Southgate if the pair are unable to patch things up in the near future. The England manager was forced to deal with a similar incident previously between Joe Gomez and Raheem Sterling in 2019 after the pair became embroiled in a scrap in the canteen at St George’s Park.

Like Foden and Bellingham, the pair had been involved in several skirmishes while playing for their respective clubs and carried their dislike for one another into the international duty with England. And a repeat of that could end up with both players missing the tournament if they are unable to sort the issue out.