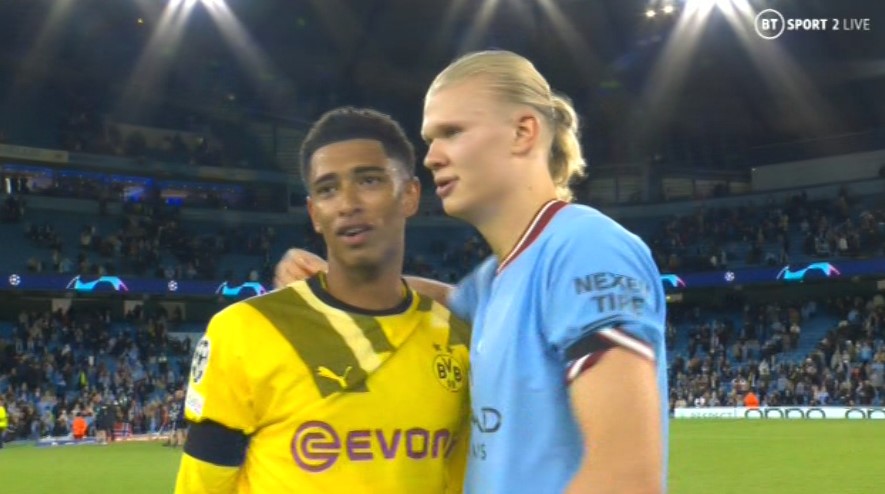 City fell behind in the second half at the Etihad Stadium through Bellingham’s goal before John Stones pulled the hosts level with 10 minutes remaining.

Haaland, who was barely involved throughout the game, scored City’s winner four minutes later as he acrobatically met Joao Cancelo’s brilliant cross with a sublime volley past the Dortmund goalkeeper.

Haaland was met with rueful smiles from his old Dortmund teammates after the full-time whistle, while television cameras caught Bellingham saying, ‘for f*** sake, man’ to the City striker whilst they shared a hug.

When asked about Haaland’s goal after the game, Bellingham said: ‘That shows his quality.

‘He’s not always in the game but you know that you give him half a sniff and he can make a goal, and that’s what he’s done tonight.’

This sums it up well. Jude Bellingham to Erling Haaland after they hug it out: âFuckâs sake mate.â pic.twitter.com/0Qfq9Bxf9J

Haaland, meanwhile, hit out at critics who highlight his lack of involvement during City’s build-up play.

‘It was a special goal I have to say, I scored a bit of the same for Dortmund against Dortmund, I’ve been trying this for the last games I’ve played for City and finally it worked, it was a nice goal,’ Haaland told beIN Sport.

‘For me it was easy to stay focused, as I always do.

‘My dream is to touch the ball five times and score five goals, that’s my biggest dream.’