This is it for Ryan Christie: he is on the brink of the most important and exciting chapter in his football career.

Tomorrow, newly-promoted Bournemouth resume life in the English Premier League with an opening-day fixture at home to Steven Gerrard’s Aston Villa and, for the 27-year-old Scotland international, this is the moment when dreams are realised.

‘This is why I came to Bournemouth in the first place — my ambition was to play in the Premier League,’ said Christie.

‘I was desperate to reach this level, to show that, hopefully, I have the skills to be able to play on such a stage. I just want the season to get started.’ 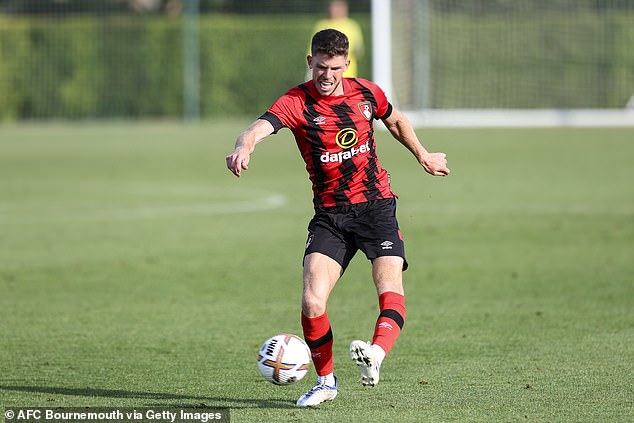 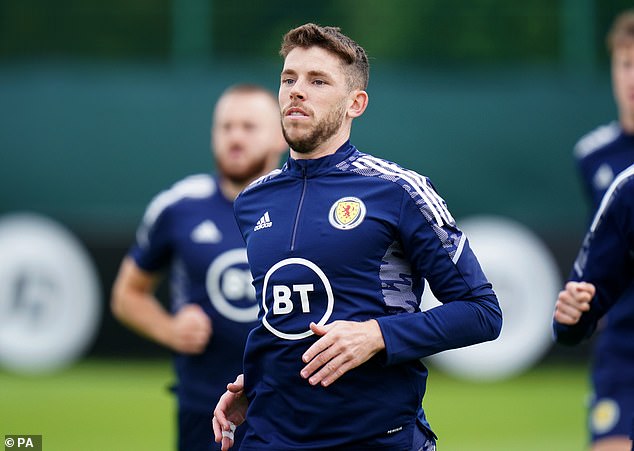 Christie’s move from Celtic in August 2021 caused quite a few raised eyebrows, not least among those who claimed that, in football terms, he was moving from a huge club to a small one.

The added intrigue was that he could have moved last summer straight to a Premier League club but instead chose to plant himself on England’s south coast at the Vitality Stadium, where he felt he had the best chance of progressing his career.

‘To be honest, I tended to ignore it. I heard about it more from family or my mates but I didn’t bother reading or listening to it myself.

‘For my career, I knew what I wanted to do. I had to leave Celtic for the sake of change and a new football challenge.

‘And when I spoke early on to Scott Parker about moving to Bournemouth, everything about the move felt right. 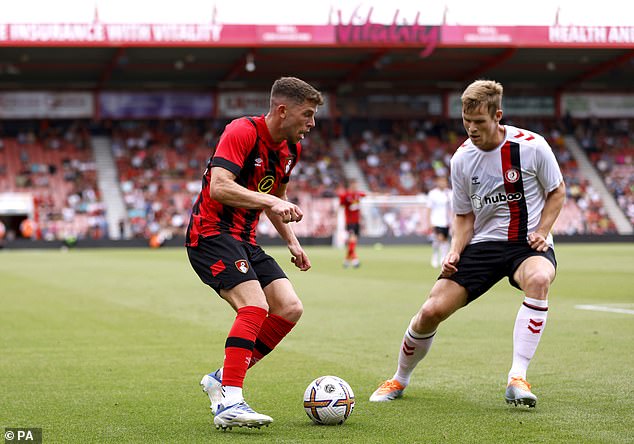 ‘There was other interest in me at the time. Burnley and another club were interested in taking me straight into the Premier League, and that might have been an easier route for me.

‘But I wanted to join a club where I would enjoy my football, and see plenty of the ball, and I really enjoyed our campaign last season in the Championship with Bournemouth.

‘They have got a style of football at this club which suits me.

‘The plan was always to play lots of football and enjoy my career, which I did last season, and get promoted. And we achieved that.

‘When I look back, it feels like I made the right choice in coming to Bournemouth.’

The task now facing Christie and his team-mates is both mouth-watering and daunting.

Parker, surprisingly, has made it plain in recent days that Bournemouth have had a poor summer in the transfer market — the club has struggled to notably improve its squad on last season — and the August roster of fixtures is an eyeful for any Cherries fan: Aston Villa (h), Manchester City (a), Arsenal (h) and Liverpool (a).

Yet Christie looks at the fixture-list and is champing at the bit to get started.

‘For sure, it is tough, it is going to be a serious challenge for us,’ he said. ‘We know — and we have emphasised this in training — how demanding the Premier League is going to be. 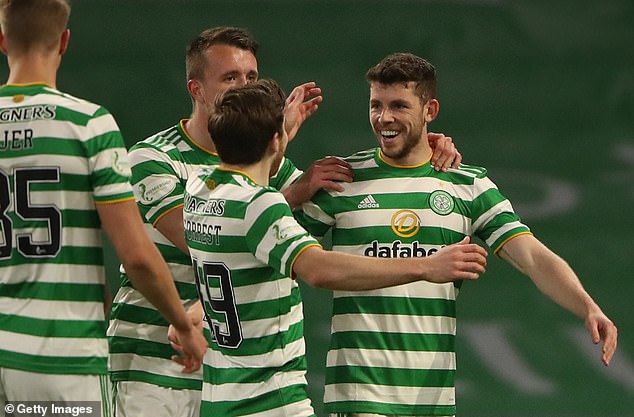 ‘We know we will need to match up to that challenge, mentally and physically, because that is a big part of top-flight football these days.

‘I feel the excitement of it, absolutely. Over the summer I enjoyed a holiday and some downtime after being involved with Scotland, but I knew what was coming.

‘The whole squad here feels the same. Personally, I can’t wait to get going.

‘It’s a tough start but it’s also exciting. It might be difficult to get a lot of points out of those games, but then again, these sorts of fixtures are why I’m here at Bournemouth.

‘Fingers crossed, maybe we can surprise a few people and have a really good start to the season.

‘These are the games I was desperate to play in. I now have this opportunity to play against the best club sides in the world, so it feels really exciting.

‘This was why I left Celtic: to play in the Premier League, to get that chance, to show that I could handle it. Well, now I’m here. Now I have that chance.’ 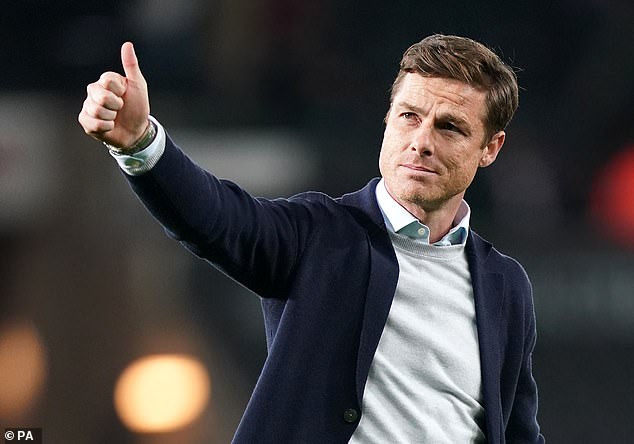 There is intrigue in seeing how he copes with the environment. Christie is one of those footballers who seem to attract admirers and critics in equal measure: those who marvel at his intuitive skills over the ball, and others who claim he can be wasteful and over-ambitious on the pitch.

At Celtic, Christie was a hero in so many moments, yet also attracted groans from the crowd when things didn’t work.

What he does possess, as well as innate ability, is a capacity for self-analysis which has probably helped him in his career so far.

He added: ‘I’ve played quite a lot of games in my career up to this point — and big games as well, at club or international level — and that helps you to build a base-level of self-confidence.

‘At the same time, if you play two or three games and you feel you are not playing so well, then yes, you can feel some doubts.

‘But what I’ve noticed is that, the older I’ve got, the more I’ve been able to maintain a level of self-confidence, which has helped me to keep a kind of consistency about my game.

‘When I was younger I was very up and down, which is maybe normal for a young player, but as time goes on you learn how to deal with things. 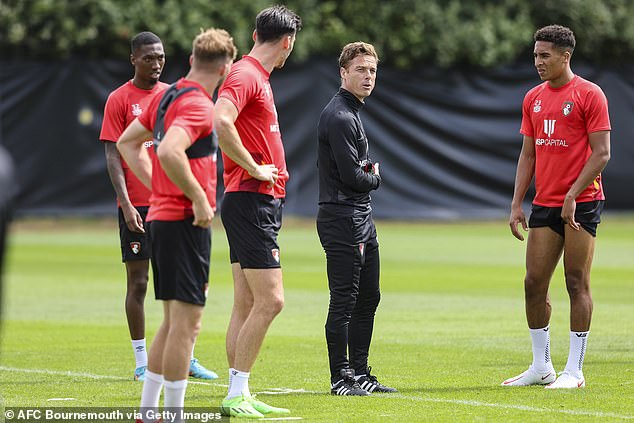 ‘I can look back to so many big games I’ve played in — for Celtic and Scotland — and knowing that I have done that has given me confidence. I feel like I can compete at this level.

‘Internationally, I’ve come up against a lot of these top players, plus I’ve trained with a lot of the Scotland boys who are already in the Premier League.

‘So I know what this level of football is all about. Hopefully, me and the rest of this Bournemouth team can show that we are good enough to be in this league.

‘I look at Scottish boys who are already at this level — John McGinn and Stuart Armstrong — and I think it’s great for Scottish football to see them playing in the Premier League, and not just playing in it, but doing really well in it. 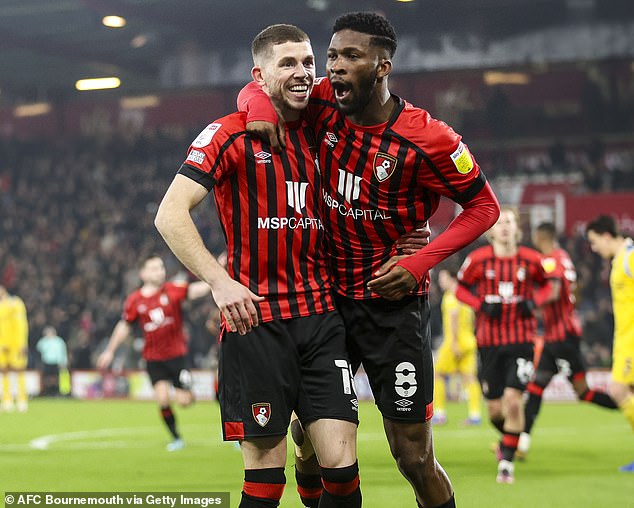 Pre-season training has been gruelling: the toughest, Christie says, he has ever known.

Over 10 days in a broiling heat in Portugal the Bournemouth squad did double-sessions, all of it tailored to coping with the higher demands of the season ahead.

‘The manager has reinforced the point that, in terms of tactics and formations, we can’t be naïve enough to think it will be the same as last season, when we went in to so many games expecting to win and had so much of the ball.

‘This season we are going to go into a few of these really tough opening fixtures and we will know that we are definitely not going to be dominating possession.

‘So we are going to have to be tactically switched on to limit them to as few chances as possible.

‘Plus, we’ll have to be ultra-efficient when we have the ball. We’ve worked on all of this in pre-season, and it’s getting to the point now where you just want to put it all into practice.

‘Portugal was hard, hard work. Really tough. But we’ve worked on everything. We’ve thought through everything. Now comes the challenge and it is to be relished.’

It helps, Christie says, that he plays for a manager he admires and trusts implicitly. Scott Parker was, in fact, the main attraction for Christie moving to Bournemouth, and the relationship the pair now have is embedded at the football club. 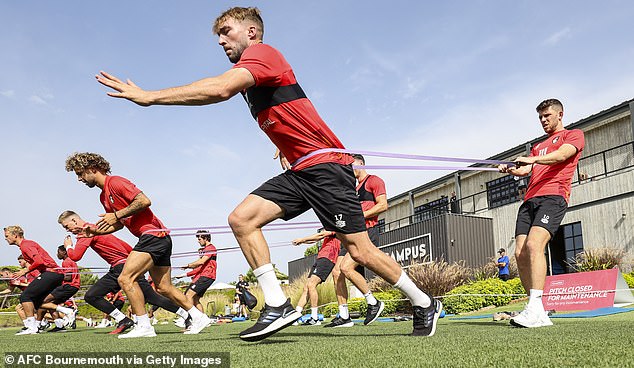 ‘From the moment I started speaking to Scott about Bournemouth last summer I was making up my mind: I knew I wanted to play for him.

‘He was brilliant with me. He was very impressive to talk to.

‘And then, when I did sign, he put into practice everything that he had spoken about with me on the phone, in terms of how and where he wanted me to play.

‘As a coach he brings new ideas to the table — you realise playing under him how clever he is.

‘A lot of people think that, if you have a great playing career, as he did, it just translates into coaching, but that isn’t always the case.

‘He’s very passionate in training every day. He joins in, and he’s certainly not lost it as a player, that’s for sure. It has been brilliant working under him.

‘At the same time, the aspirations of the club are massive: everybody is pushing to make Bournemouth as successful as they can be.

‘The club believes, rightly in my opinion, that this is where it belongs, in the top flight.’