La Liga have taken the action to suspend all games for at least the next two weeks in response tot he coronavirus pandemic.

The Spanish top flight had originally planned to play the next two rounds of matches behind closed doors.

But, under guidance from the government, they have now decided to suspend all matches for the remainder of the month.

It also comes after Real Madrid announced they would be going into quarantine after a member of their basketball team tested positive for coronavirus.

The basketball team uses the same facilities as Zinedine Zidane’s side, raising doubt on whether Manchester City’s scheduled Champions League tie against Real will go ahead next week. 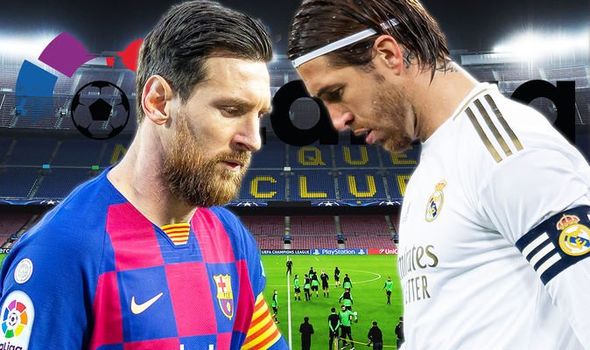 La Liga are following in the footsteps of Serie A in taking the drastic decision, seen by many as a necessary precaution given the circumstances.

There is now mounting pressure on the Premier League to make a stand with an emergency meeting taking place today.

Prime Minister Boris Johnson is scheduled to chair a Cobra meeting this afternoon alongside Premier League bosses to discuss the next step.

Reports have suggested there is a strong possibility the decision could be made to suspend fans from attending games.

An announcement is expected to be made on Friday that the UK will progress from the ‘contain’ phase of the coronavirus outbreak to the ‘delay’ phase.

But it has been suggested the Premier League will now follow La Liga or Serie A in suspending matches for a number of weeks.

Instead, games will likely be played behind closed doors while pubs will not be allowed to show matches to avoid large congregations of fans.