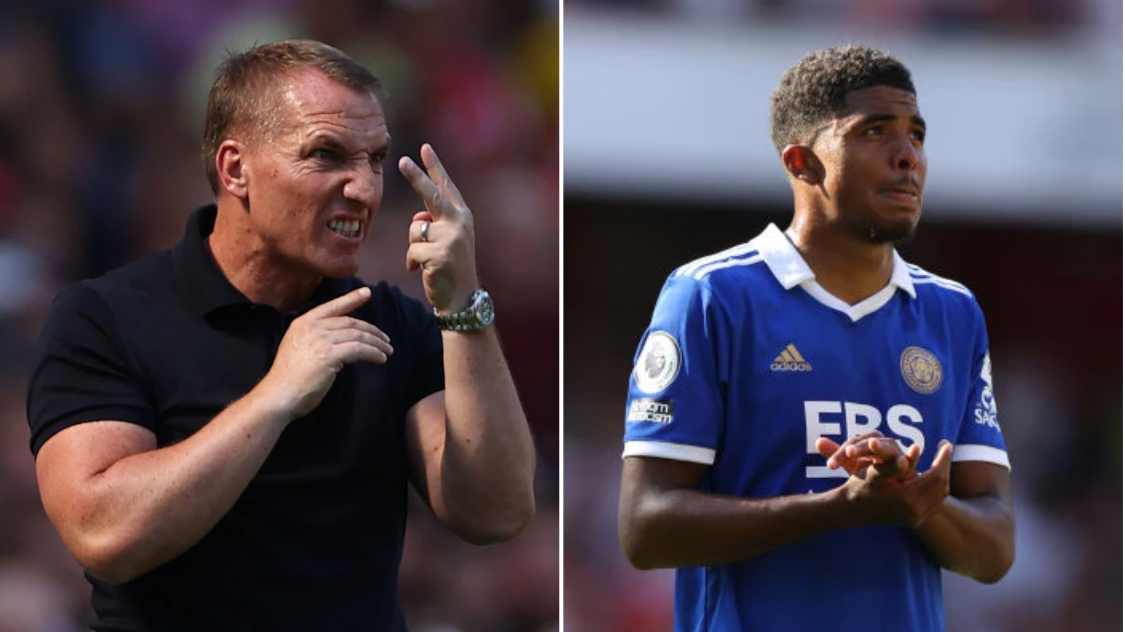 The 21-year-old centre-back has been the subject of two unsuccessful bids from Chelsea this summer, with the west Londoners expected to return with a third offer that is closer to Leicester’s £80million valuation.

Fofana is believed to have already agreed personal terms with the Blues and got Chelsea supporters very excited with his actions at the end of his side’s 4-2 loss at the Emirates.

While the rest of his team-mates were in the centre of the pitch swapping shirts and chatting, Fofana made a beeline for the away end and looked quite emotional as he stood by himself clapping Leicester’s travelling fans.

After several moments, however, the rest of the Leicester squad walked over to join him and Rodgers has rubbished suggestions that Fofana’s gesture was a sign that his departure is imminent.

When it was put to him at his post-match press conference that it looked as though Fofana was waving goodbye, a bemused Rodgers allowed himself a chuckle before hitting back: ‘Well if that’s what you need to write then you write he’s saying farewell. So that’s your story so…’

Probed further on whether there is any update on Fofana’s potential move, Rodgers continued: ‘No, I think he was giving the fans a clap. I didn’t see a farewell clap. But you need to write what you need to write. That’s the story.’

Rodgers has repeatedly maintained that Leicester do not want to sell Fofana this summer, while he is believed to have told the youngster that his development would be best served at the King Power Stadium – particularly in a World Cup year.

Speaking about Fofana prior to the Arsenal defeat, Rodgers said: ‘We’re not looking to sell. Naturally, if there’s interest from other clubs, that is looked at by the club.

‘He’s a top young defender, and there are not too many around his age.

‘Another year here for him at least would be really important for his development, but he is quite calm and relaxed in the situation.

‘He is aware of the interest. He understands where we are as a club and where we see him.’

Harry Maguire’s £80m move to Manchester United in 2019 remains Leicester’s club-record sale and the Foxes would expect to receive the same – or more – for Fofana.

The Frenchman enjoyed a brilliant maiden campaign in the Premier League but a leg break suffered in pre-season before the start of the 2021-22 campaign curtailed his involvement last season – though that did not stop Leicester from offering him a new five-year deal in March.