The chance was there. Win and West Ham would have finished sixth, securing another season of Europa League football and condemning Manchester United to Europa Conference League.

So an enjoyable campaign ends on a slightly sour note for David Moyes, mulling over what might have been. Still, Europe is Europe, and that’s what awaits West Ham.

New cities to conquer, town squares to commandeer, streets to turn claret and blue in 2022-23. West Ham supporters will happily take a second season of European football, even if it isn’t in the competition where there was unfinished business after that semi-final loss to Eintracht Frankfurt. 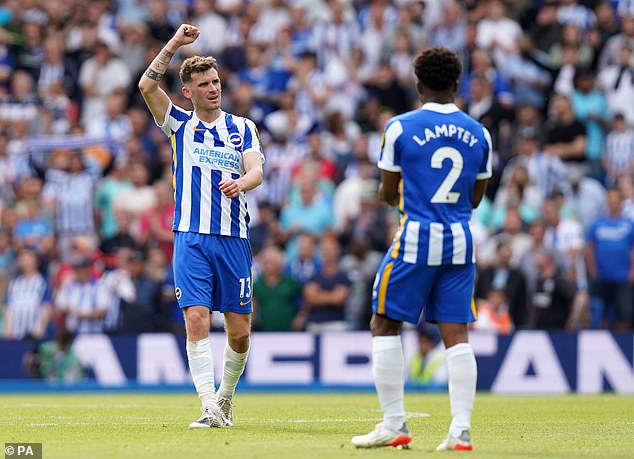 To reach the final stages of that competition and still finish seventh is no small achievement. Moyes and his squad gave it all a go, and amid the disappointment of this defeat, we must not forget that this was Mark Noble’s big farewell to a playing football.

Before a ball was kicked, there was a presentation for Noble. The retiring club captain was gifted a gong and a bottle of champagne by Brighton before kick off. A nice touch from a nice club.

You’d be incorrect to think that Brighton arrived here with nothing to play for. Win and they might finish eighth. Lose and it could be 14th. The difference in prize money between those two positions is an estimated £16million – and that isn’t chump change to a club like Brighton.

That would be enough to sign another Marc Cucurella – the 23-year-old left wing-back who is wanted by Manchester City this summer. With this potentially his final farewell at the Amex Stadium, he featured on the front cover of the match-day programme.

Cucurella is one of several talented players under Potter, so West Ham knew they wouldn’t have it easy at the Amex. Brighton have been a bogey team for them in the Premier League, too. They’d not beaten the Seagulls in any of their nine attempts, but had to win here to get what they wanted. 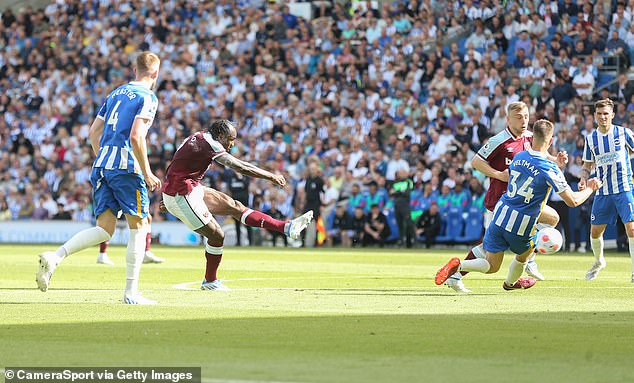 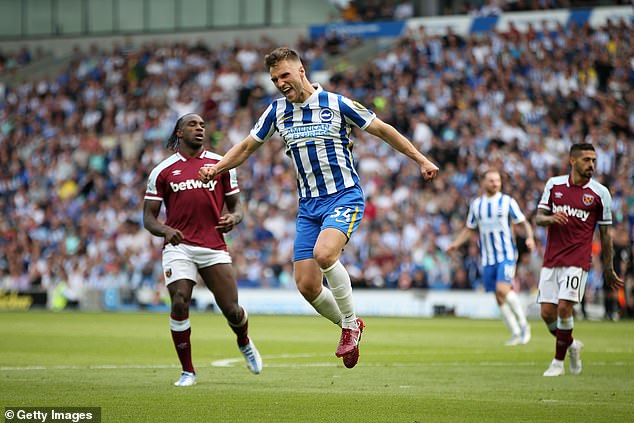 It was after 37 minutes that news broke that Manchester United were losing at Crystal Palace. The visiting supporters suddenly pumped up the volume, wanting to let their players know.

West Ham had been passing the ball around nicely, but not yet managed a shot on target.

That changed in the 39th minute when the away end turned into a sea of limbs. Vladimir Coufal’s throw-in found Michail Antonio, who muscled off the opposition. As the ball settled, he swung a left foot at it, sumptuously finding the top corner and beating Robert Sanchez.

All 55 of his previous Premier League goals had come from inside of the box. Not a bad time to bag your first from outside. Brighton complained that Antonio had unfairly shoved Lewis Dunk off the ball in the build-up. He hadn’t. He was simply too strong and the goal was good.

West Ham were winning 1-0, and Manchester United were losing 1-0. The away contingent were now singing about ‘going on a European tour’. In the Europa League, if the results stayed as is. But then a lot can happen in a half of football. Brighton boss Graham Potter brought on Neal Maupay and within two minutes, he was testing Lukasz Fabianski. 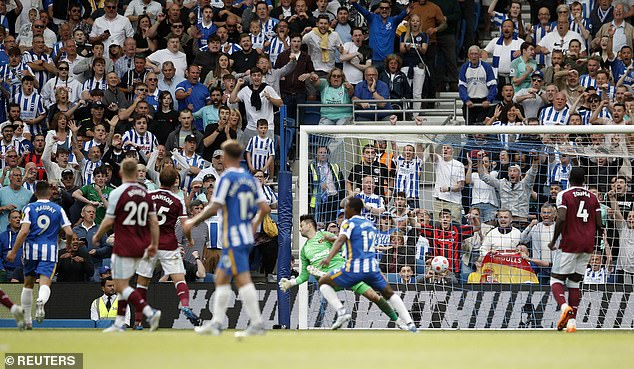 Whatever Potter said at half time worked. Brighton were on top and it became 1-1 in the 50th minute when Joel Veltman squirmed his shot under the body of Fabianski. The West Ham goalkeeper would be disappointed when watching back the replays, and so would Moyes when seeing how Antonio failed to track Veltman.

Suddenly it was all Brighton, and Danny Welbeck should have scored when he broke through to the left of the box. The angle was tight and he sent his shot wide.

As the clock hit 80, Brighton took the lead. Pascal Gross was fed the ball and controlled it with his right before turning and striking a shot with his left. A fine finish. Matters got worse for West Ham in the 90th minute when a corner came in and Welbeck headed home for 3-1.

Noble was introduced to make his final appearance for the club he loves. He received a rousing reception, the supporters of both sides recognising the end of a long and dedicated career.

There was a funny moment when Maupay, after multiple fouls, finally received a yellow card. That prompted sarcastic cheers from West Ham’s supporters, and he responded by signalling the scoreline his fingers and telling the away end to shush.

In turn, they sang about going on a European tour. They are and, though it’s in the Europa Conference League, they’ll have a party nonetheless.