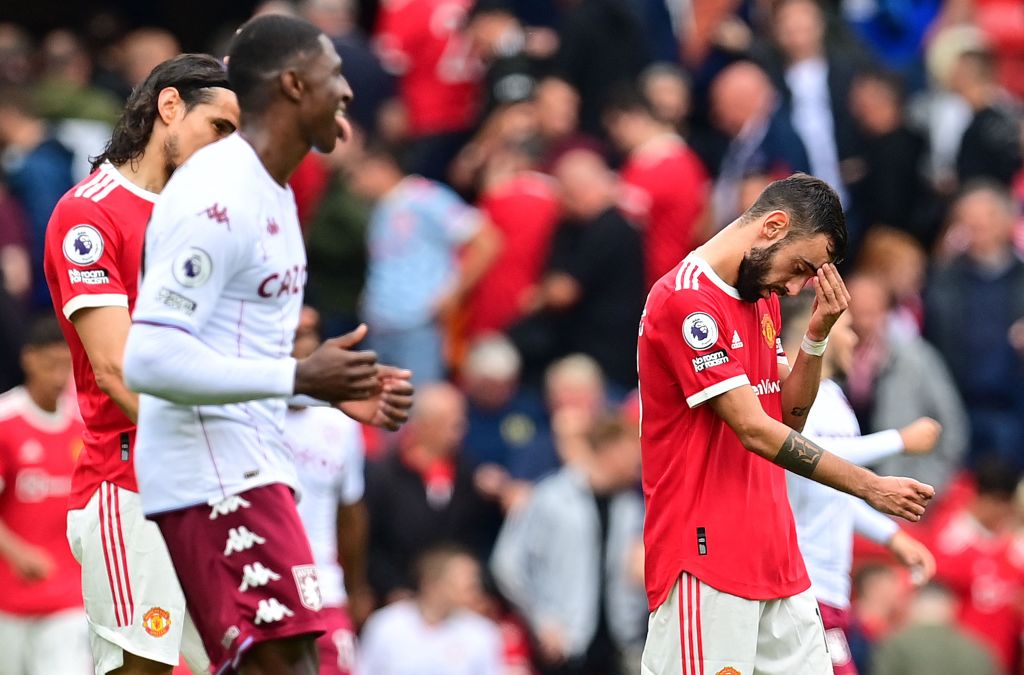 Bruno Fernandes has vowed to ‘come back stronger’ after missing the target with a late penalty in Manchester United’s 1-0 defeat to Aston Villa.

The Portugal attacking midfielder was handed a golden opportunity to score a stoppage-time equaliser as Kortney Hause handled inside the box just moments after putting the visitors in front at Old Trafford.

But Fernandes, renowned for his quality from the spot, blazed his effort well over the crossbar and Villa held onto their narrow advantage to consign United to a third defeat in four games.

The result saw the Red Devils drop to fourth in the Premier League, with Liverpool taking a one-point lead at the top of the table after their 3-3 draw away to Brentford in Saturday’s late kick-off.

‘Nobody is more frustrated and disappointed than me for missing the penalty and the consequent defeat,’ Fernandes told his 5.8 million followers.

‘I’ve always assumed my responsibilities and I’ve always embraced them under pressure in moments like this. Today, I failed. But I took a step forward and faced the challenge with the same ambition and responsibility as when, on the many other occasions, the ball ended up in the net.

‘Criticism and contrasting opinions are a big part of football. I’ve learned to live with it, even using them to drive me on, and I consider it all a very important part of my commitment to never stop trying to improve and to become the best player I can possibly be, for me and the team.

‘Today I once again took the responsibility given to me almost since I joined United and I will take it again without any fear or dread whenever called upon.

‘The most important thing for me is to win together and I’ll always do everything I can to help my teammates and the club to be the best we can be.’

Fernandes added: ‘I’m a player who leaves everything on the pitch, with great desire and commitment. And that’s what I’ll continue to do.

‘Thank you for all your support after the final whistle! Hearing you chanting my name in the stadium was very emotional…

‘I will come back stronger for me, because these are the standards I hold myself to, but most of all for my teammates and our fans who have always supported us.’

Speaking to MUTV shortly after the final whistle, David de Gea stressed that Fernandes had the full support of his team-mates and was confident the Portuguese would bounce back stronger from his missed spot-kick.

‘It’s a very disappointing day for us. I think there are no excuses today,’ United goalkeeper said.

‘We were playing at home, we were with confidence.

‘So if we want to win big trophies like the Premier League, we have to win these types of games.’

The Spainiard added: ‘It’s time to recover, time to see what we can improve from the game,’ he went on.

‘So it’s another massive game on Wednesday. We play at home with the fans, it’s going to be a nice one so let’s prepare properly and be ready.’