French import Loic Puyo scored a goal of the year contender as Macarthur FC held off a rampaging Newcastle Jets to notch a 2-1 victory – their second since joining the A-League.

The Bulls made an utterly dominant start to Sunday's contest at McDonald Jones Stadium, taking the lead in just the eighth minute after a brilliant bicycle kick from Puyo, the former Ligue 1 midfielder. 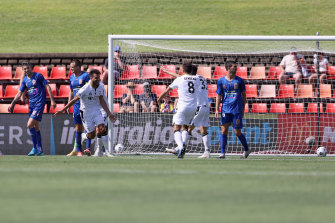 Loic Puyo celebrates his spectacular opener for Macarthur during the A-League win over Newcastle.Credit:Getty

Ivan Franjic's cross set him up, but Puyo expertly re-adjusted his body when the delivery was diverted mid-flight by a header from Nikolai Topor-Stanley, before hooking the ball past Jack Duncan.

Puyo then turned provider in the 23rd minute, with his corner kick spotting Matt Derbyshire for an easy near-post header to double Macarthur's advantage.

It looked as if the Bulls would coast to victory from there – but the Jets dominated the remainder of the match, loosening Macarthur's grip on proceedings with an onslaught of attacking football that should have yielded more than one goal.

The hosts squared things up three minutes before half-time when two Roy O'Donovan shots were blocked – the second one, saved by Adam Federici, deflected into the legs of Valentino Yuel, who was credited with his first senior goal despite knowing very little about it.

Newcastle maintained the ascendancy well into the second stanza, which was played mostly in their attacking half, but lacked the finishing touch that could have put Macarthur to the sword.

O'Donovan was the most culpable in that department, burning another one-on-one chance in the 54th minute when he could have squared the ball to an unmarked Yuel.

An injury-time shout for a handball penalty against Denis Genreau was denied, because the ball came off his own foot before hitting his hand – in line with the latest interpretation of the rule, although the Jets faithful fumed that it was not given.

Only some poor decision-making in the final third and some desperate, last-ditch defensive actions from Macarthur stopped the Jets finding an equaliser.

They also had a Jason Hoffman goal correctly disallowed early in the match for the VAR for offside, while Derbyshire was denied a second for the Bulls in the shadows of half-time by the woodwork, after a deflected shot from the lively Lachie Rose fell to him.

After a loss and a draw at home in their last two outings, Macarthur will be happy with the win but remain a clear work in progress, with the gap between their best and worst football frustratingly wide.

Newcastle, on the other hand, will feel as if they deserved at least one point, if not all three – but the performance itself was a spectacular riposte to those predictingthey would be A-League cannon fodder after a turbulent pre-season.

Tags: Bulls, fast-finishing, hold, off
You may also like
Latest Posts