Socceroos legend Tim Cahill has hit back at criticism of his ambassadorial role for the 2022 World Cup in Qatar, saying it is an opportunity for him to affect "big change" in the oil-rich Gulf nation.

Cahill joined fellow retired stars Samuel Eto'o, Xavi and Cafu earlier this month in becoming an official ambassador for the 'Supreme Committee for Delivery & Legacy', the body responsible for the planning and execution of the World Cup. 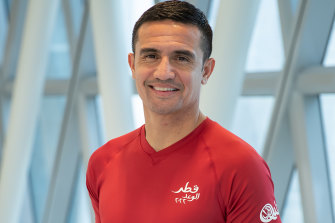 Tim Cahill has responded to criticism over his new gig as an ambassador for the 2022 World Cup in Qatar.

"I don't have any real comment on their feelings because I'm of a different influence, being named one of four global ambassadors that can help make a big change [to Qatar].

"We, as an institution, the Australian FA, we use Qatar facilities all the time. We've got a relationship with them. Everyone got sent a press release and what they didn't read, or didn't want to read, is up to them."

Slater also queried why Cahill was happy to be an ambassador for the 2022 World Cup in Qatar, but not Australia's bid to host the 2023 women's equivalent.

"That question is for the FFA, not for me," Cahill said. "I was the ambassador for the [2019] Women's World Cup. It's just interesting for me … anyone who knows me or the type of person I am, whenever I get a call from Australia to help in any sort of way, I've never said no."

Cahill's close ties with Qatar have also helped him further his coaching ambitions. Having completed his UEFA A Licence, he has recently been working with Qatar's junior national teams at the Aspire Academy.

"Their national team is run like a club side," he said.

"I'm inside that now and get to witness it and be a part of it, learn different skills and techniques. A lot of top coaches pass through every day. It's been absolutely fantastic.

"I go about my business quietly. People always come round when they find out the projects I'm working on."

Tags: 'chang, Cahill, can, he, help, says
You may also like
Latest Posts