Celtic have warned fans not to stage further protests outside Parkhead ahead of their game against Kilmarnock, amid mounting pressure on manager Neil Lennon.

In an announcement on Twitter on Thursday, the Celtic Trust fans group called on supporters to demand change “on and off the park” in a “Covid-compliant” manner on Celtic Way just outside the stadium, prior to their side’s crucial upcoming league game.

Angry protests ensued following the Hoops’ surprise 2-0 defeat to Ross County in the Betfred Cup. Police reported three injuries incurred by their on-duty officers and the club claimed players were left “shaken” after being targeted by missiles.

We are aware that the protest (see graphic) planned for Sunday is contentious. We understand the concerns of many supporters – both health concerns and the impact on the team and we have addressed both in the planning. See guidelines below. pic.twitter.com/4KPvqUqneL

Amid a heavy police presence, further displays of disaffection followed after Sunday’s 1-1 home draw with St Johnstone. Police Scotland later said two arrests had been made outside the ground for “disorder offences”.

Responding to the recent protests and the post from the Trust, the club has pleaded with supporters to adhere to public health advice and not congregate outside the stadium at their next league game. A statement from Celtic read: “Following the announcement of a proposed gathering at Celtic Park this Sunday, December 13, ahead of our league game against Kilmarnock, the Club fully understands the concern and frustration amongst supporters following recent results and performances, but clearly, we do not believe staging an event of this kind is in the best interests of supporters, the team or the Club in general, particularly just prior to the match.

“For important clarification, in the present circumstances and given the health risk of gatherings of any kind, the Club has not agreed to any gathering taking place. Celtic Football Club is not involved in the organisation of the proposed gathering.

“The Club is also duty-bound to point out that it has received legal and safety advice indicating that, if strict social distancing and applicable Scottish Guidance are not implemented, any such gathering would breach current legislation – something the Club would wish all supporters to be aware of. 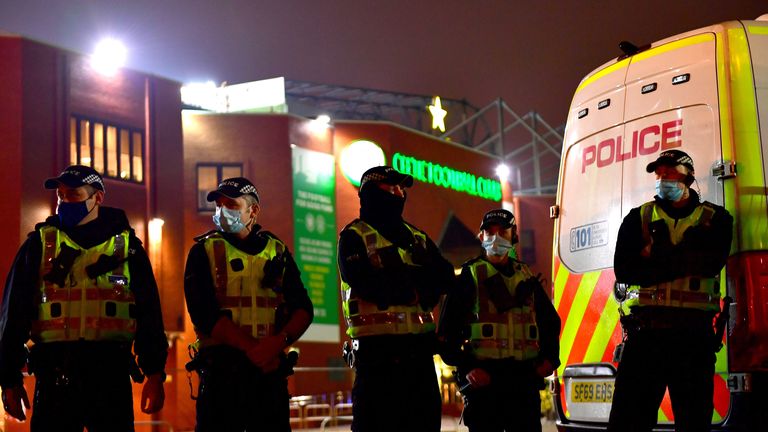 “As is always the case, the Club is, of course, happy to engage with supporters and supporter groups to understand and discuss concerns, and the Club encourages supporters to raise their concerns with the Club directly.

“Indeed, following a recent request, we look forward to meeting The Celtic Trust next week.”

Despite repeated calls for Lennon to be relieved of his duties, Celtic’s board have stuck by him for two weeks in a row, reiterating that the 49-year-old and his backroom team have the full support of the boardroom.

Celtic are now 13 points behind Scottish Premiership frontrunners Rangers and without a victory in five games in all competitions.

Lennon’s side, which sealed the club’s ninth Scottish top-flight title in a row last season, can clinch the 2019/20 treble on December 20 when they face Hearts in the delayed Scottish Cup final.

After their final Europa League Group H tie against Lille on Thursday and their clash with Kilmarnock, Lennon’s side also face Ross County (December 23), Hamilton (December 26), and Dundee United (December 30) before the New Year.

Lennon accused sections of the Parkhead support of engaging in “dangerous rhetoric” after a ‘Shoot the Board’ banner was hung outside Celtic Park.

The Northern Irishman said of the banner: “From some sections of the support it is dangerous rhetoric.

“We don’t want any divisions. I understand the frustrations and the players are feeling that as well.

“But we don’t like that kind of language or expression anywhere near the football stadium. It serves no purpose really.”

Tags: against, Celtic, fans, Nei, warned
You may also like
Latest Posts