Another day of matches in the Championship ended with Fulham atop the division on Saturday, as West Brom left it late to keep pace with their titel rivals.

The Baggies’ Semi Ajayi tapped-in to score the winner over Peterbrough and ensure the top two remained unbeaten and locked on 13 points together after their fifth matches.

There were plenty more thrills and spills in the second-tier and here, Sportsmail takes a look around the grounds. 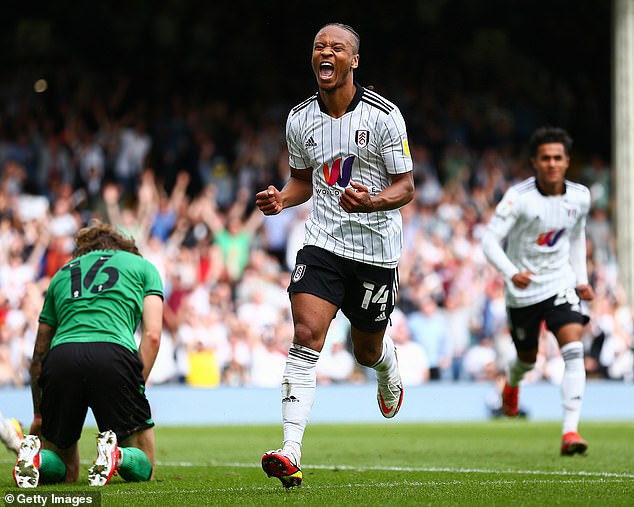 Cardiff were beaten for the first time in the Championship this season thanks to an Andreas Weimann double.

Weimann gave City the lead as he took advantage of some hesitant Cardiff defending.

Bristol City goalkeeper Daniel Bentley could do nothing about Cardiff’s equaliser as the ball struck him, but Weimann won it with a superb volley to give Bristol City the Severn Bridge bragging rights.

Bristol City boss Nigel Pearson said: ‘Physically it was a big challenge. We needed to be big.’ Cardiff boss Mick McCarthy added: ‘My team gave me everything.’ 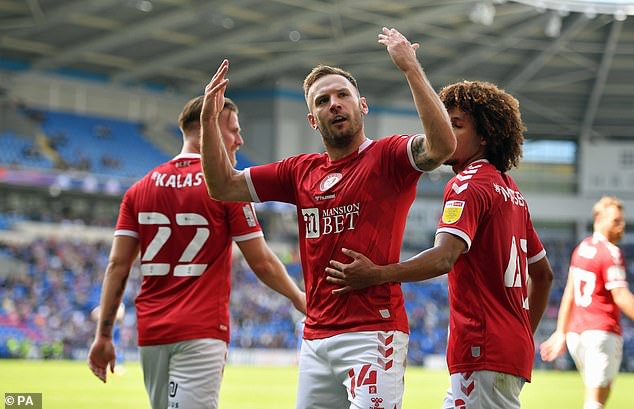 Birmingham boss Lee Bowyer was disappointed to not win at Barnsley.

Callum Styles put the home side ahead early on before Lukas Jutkiewicz equalised, and Bowyer said: ‘We should have left with all three points. We dominated the second half and created three very good chances – not half chances.’

Barnsley head coach Markus Schopp added: ‘I am not frustrated. At the end, we are happy with a point.

‘More especially in the second half, when they hurt us.

Playing Birmingham is not an easy one. They are tough.’

Carlos Corberan praised his Huddersfield side’s maturity as they leapt to fourth place in the league.

Lewis O’Brien opened the scoring before the break, and the Terriers then ran riot in a second half that brought goals from Matty Pearson, Sorba Thomas and Danny Ward.

‘I am happy because the team played good football, was very serious and competed very well,’ Corberan said.

For Reading boss Veljko Paunovic it was a miserable afternoon. ‘It is a game to forget as soon as possible,’ he said. 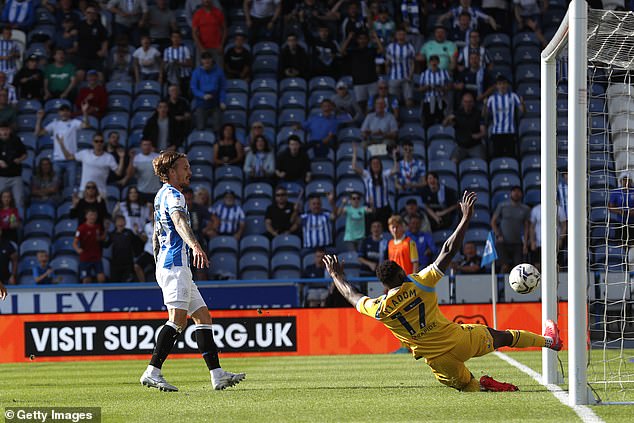 Rival bosses Darren Ferguson and Valerien Ismael had to be kept apart at the final whistle after West Brom snatched a dramatic late winner at London Road to keep pace with leaders Fulham.

The match was heading for a 0-0 draw when Matt Phillips broke into the box and squared for the unmarked Semi Ajayi to tap in from close range.

Peterborough could hardly complain — West Brom had piled up 19 shots — but the manner of the loss was heartbreaking.

And Posh boss Ferguson was furious, squaring up to West Brom manager Ismael at the end before both men were pulled apart.

West Brom had produced the better chances during the game with Peterborough keeper Christy Pym pulling off a number of saves, the best to deny Jordan Hugill with a sharp header. 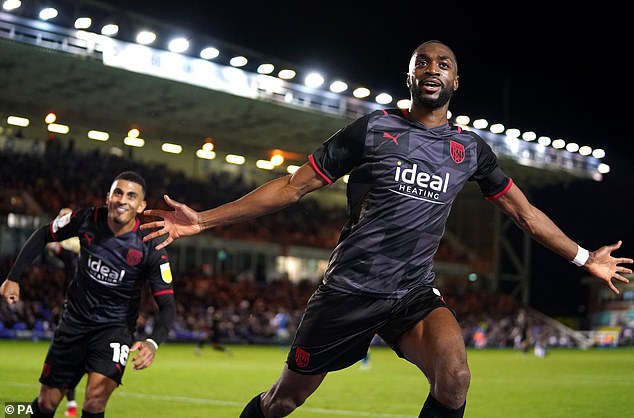 Russell Martin slammed an unacceptable display after his Swansea side let an early lead slip at Preston.

Emil Riis gave Preston the lead in the dying seconds of the first half and then Ben Whiteman’s 52nd-minute free-kick settled the outcome.

‘I am really disappointed and didn’t see it coming,’ Martin said. ‘We scored a goal of real high quality but to let them score so soon is unforgivable.

‘The goals we have conceded have really hurt me.’

Preston boss Frankie McAvoy was understandably pleased after seeing his side record their third win in the space of a week.

‘Once we got the press right, we started to make things happen,’ he said. ‘After they scored, credit to the players.’

Rangers struggled in the first half but Dykes put them ahead soon after coming on as a substitute midway through the second half and Yoann Barbet doubled the lead.

It was an emphatic return to action for the Scotland striker, who was recently laid low by illness. Warburton said: ‘Lyndon has been ill with a bug. He was hit particularly hard.

‘He’s come back and you saw his energy, the goal and his aerial threat.

‘He was chomping at the bit to come on. He came off the bench, looked a threat and had the bit between his teeth.’

Coventry manager Mark Robins admitted the visitors paid the price for failing to take their chances when they were on top. He said: ‘We had to create that impetus.’ 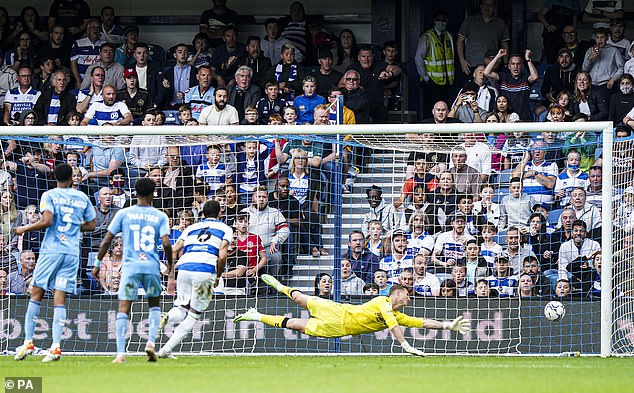 Gary Rowett hopes he never has to rely on a last-minute winner again after watching Millwall do it the hard way against 10-man Blackpool at The Den.

Jake Cooper’s late header hauled the hosts to victory after Callum Connolly was sent off after fewer than 15 minutes had been played.

Shayne Lavery opened the scoring for Neil Critchley’s visitors just before the hour mark and after Jed Wallace levelled, captain Cooper was on hand to secure Millwall’s first win of the season.

Relieved Rowett said: ‘I did say to the players after, “Can I please not have any more games like that” because I was going to have a heart attack at one point.’

Critchley, whose Blackpool side have two points after five games, said: ‘It was cruel, a cruel way to end the game for us.

‘It’s very hard to sum up how I’m feeling at the moment.’

Tony Mowbray and Neil Warnock were surprised by the late red cards that Blackburn and Middlesbrough received at the Riverside Stadium. Boro captain Jonny Howson struck with a tidy lob to cancel out Sam Gallagher’s brilliant opener for Rovers.

Blackburn defender Hayden Carter was first to go with ten minutes left for his high foot on Paddy McNair.

Less than two minutes later, Sam Morsy was dismissed for the home side.

In the end Blackburn boss Mowbray was satisfied to have left his native Teesside with a point after a tough encounter.

‘It was a bit of blood and thunder, not sure if it was a game of two sending offs, but there you go,’ he said. 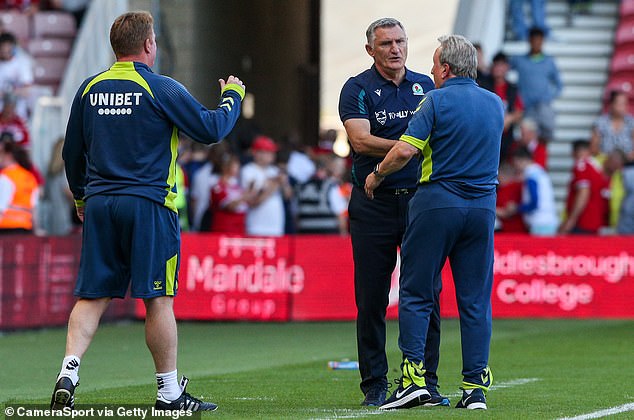 Tony Mowbray and Neil Warnock faced-off in a battle of vetran bosses, coming to a draw

Bournemouth boss Scott Parker was left frustrated by his side’s draw at the MKM Stadium. The visitors had three clear chances at goal, but the home goalkeeper, Matt Ingram, kept the Cherries at bay.

‘We huffed and puffed and had big chances,’ he said.

‘We defended very well. We just didn’t get our noses in front – it’s a game in which we created enough to win it, but it was not to be.’

When asked about late signings, Parker said they were close with some movement.

‘We are close with a couple of things,’ the manager hinted. ‘

‘I can’t wait until it shuts!’

Hull City manager Grant McCann was positive about his side’s performance. ‘We’ve got to respect the point,’ he said. 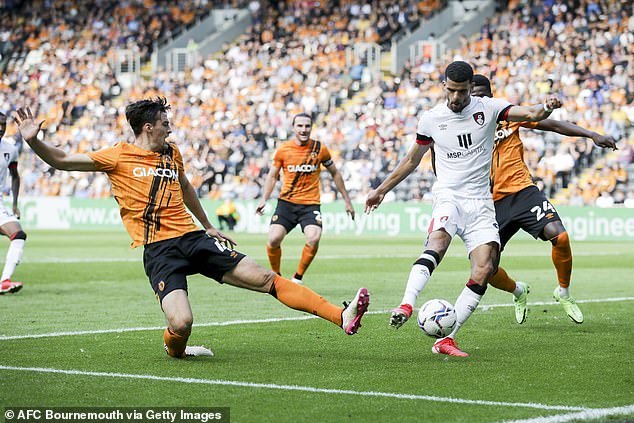 The away side barely threatened at Kenilworth Road, with the hosts looking by far the more likely to score in the second period, with Fred Onyedinma’s goal disallowed for offside. Jokanovic, who is still searching for a first victory of the season, said: ‘I can’t be satisfied, we didn’t show enough quality.

‘We were without enough energy and at the end I did not have the sensation that we were close to winning.

‘We tried but without the quality and the energy it wasn’t easy.’

‘I’m really pleased that we bounced back,’ he said. ‘We’re punching above our weight.’