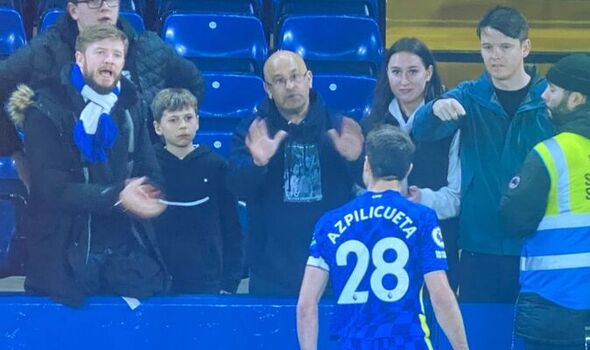 Chelsea captain Cesar Azpilicueta was involved in a heated confrontation with his own supporters after his side’s disappointing 4-2 home defeat to Arsenal that leaves the Blues with work to do to make sure of their place in the top-four. The Blues never really got going on a night when Mikel Arteta’s side showcased their Champions League qualification credentials with the perfect response to three straight defeats.

Yet Azpilicueta was partially to thank after he tussled with Bukayo Saka, prompting John Moss to award a penalty that allowed Arsenal to kill the game.

Saka stepped up and made no mistake from 12-yards, sending Edouard Mendy the wrong way.

Tensions were high in the stands at full-time and Chelsea suffered without a sell-out crowd at Stamford Bridge due to the sanctions posed following the club’s former ties to previous owner Roman Abramovich.

One set of fans appeared to make their feelings towards Azpilicueta and Chelsea’s performance clear after the final whistle, as the Spaniard march over towards the crowd.

The Stamford Bridge legend looked frustrated with something that was said, while the fans appeared to protest their innocence while pointing towards the below-par display from Thomas Tuchel’s side.

Azpiliceuta was clearly riled up knowing that he was partially responsible for another uncharacteristically bad home result.