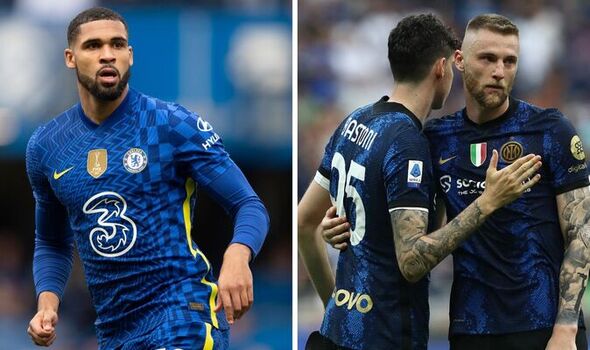 Chelsea want to sign Milan Skriniar from Inter Milan and the Blues would favour a swap deal to minimise spending with Ruben Loftus-Cheek among those being considered as makeweight, according to reports. Thomas Tuchel is looking to mark the new era in style this summer, when is expected to receive a significant transfer budget by the club’s new owner Todd Boehly.

Chelsea are yet to kickstart their spending though despite firm links to Jules Kounde, however, it appears he is now the only centre-back on their radar.

The Mail say – in line with reports in the Italian media – that Chelsea want to sign Slovakian international Skriniar from Inter.

Paris Saint-Germain are also seriously interested in the former Tottenham target, who could leave Inter this summer.

The Nerazzurri are still experiencing some financial difficulty off the field and a significant sale could help balance the books.

The report adds that Chelsea would favour a swap deal, though, to keep costs down and it’s suggested Loftus-Cheek is among the players that could make way.

He is facing an uncertain future at Chelsea – despite receiving his fair share of football last season – amid talk of additional interest in Italy from Lazio.

Chelsea need to replace their two key departures at the back after Antonio Rudiger and Andreas Christensen moved onto pastures new with Real Madrid and Barcelona, respectively.

Skriniar would fit the bill and he already has experience playing in a back-three at Inter, where he won the Serie A title last season.

The 27-year-old only recently declared that he believed his future was at the San Siro, which would suggest he is not exploring a summer exit.

“My future is at Inter,” Skriniar said. “I have a contract and nothing has changed. The transfer rumours come out every six months, every year. But there’s nothing specific – I’m satisfied with Inter.”

Chelsea are also believed to hold an interest in RB Leipzig’s Josko Gvardiol.

The Croatian international is valued at close to £70m and is expected to remain in Germany next season.

Tottenham have also shown interest in the former Leeds target but Chelsea have plenty of alternative options in mind.

The Blues are widely expected to firm up their interest in Sevilla man Kounde with a formal bid when they feel the time is right.

He came close to joining last summer but negotiations with Sevilla stalled after an opening bid of £42.5m.

Pau Torres is another name of interest to the Blues.