Chelsea’s hopes of a double raid on Inter Milan for two key transfer targets could fall short following the news that one of the duo looks set to head elsewhere.

The London club’s desire to secure the signing of striker Romelu Lukaku is well known, with the Blues hoping to entice the big Belgian striker back for a second stint at Stamford Bridge.

But Thomas Tuchel was also thought to be keen on the signing of right wing-back Achraf Hakimi, and the Blues were believed to be in the running to secure the Moroccan international’s signature.

According to Italian journalist Gianluca DiMarzio, Inter set the bar high for the trio of well-heeled clubs looking to add Hakimi to their lineups.

DiMarzio stated that Paris Saint-Germain, Bayern Munich and Chelsea have all been in the running for Hakimi, with the Nerazzurri already turning down a £51.5million bid for the player from an unspecified club.

He went on to explain that Inter had set the price for the player at £69million, plus bonuses in a bid to maximise their return for a player they signed for a reported £34million. 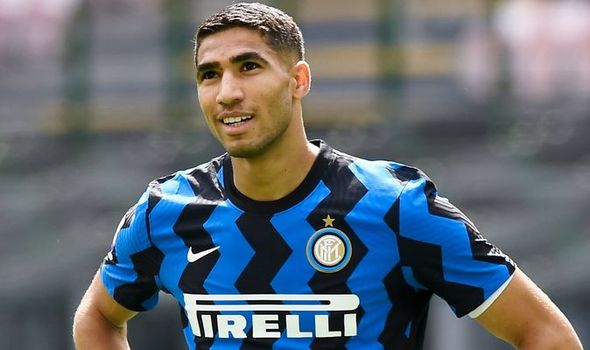 It means Inter are effectively looking to double their money on Hakimi, who they seem resigned to losing in the summer transfer window.

Indeed, the club has already identified a potential replacement in the form of Barcelona’s Emerson Royal, who has been on loan at Real Betis.

The Brazilian is thought to be available for around £22million, meaning the Serie A champions could net a tidy profit if either of Hakimi’s suitors are prepared to stump up the money to secure his services.

And, while Chelsea certainly have the funds to secure Hakimi’s services, it appears PSG have stolen a march on their rivals in the race to sign the former Real Madrid man.

RMC Sport reporter Mohamed Bouhafsi has reported that Hakimi has agreed a deal in principle with the Ligue 1 giants, and the French side look close to striking a deal with Inter.

“As announced yesterday, negotiations are progressing well between PSG and Inter Milan,” he tweeted.

“Hakimi is convinced by the Parisian project.”

Hakimi’s performances on the right flank for Inter were a feature of the Nerazzurri’s championship-winning season in Serie A.

But, following the departure of manager Antonio Conte from the San Siro, it meant the man who brought Hakimi to Inter had gone.

The club subsequently decided to listen to offers, with PSG leading the charge to sign him.

Earlier in the week, Bouhafsi reported that PSG sporting director Leonardo had made Hakimi “his priority on the Parisian right flank.”

At the time, PSG and Bayern’s interest in Hakimi was well known, but later in the week Chelsea’s interest emerged.

However, unless the Blues are able to insert themselves into the discussion with a late bid, it seems Tuchel may have to move on from Hakimi as he focuses his attention on his Inter teammate Lukaku instead.