Chelsea fan group deck out Stamford Bridge in Union Jack flags – and urge the crowd to ‘belt out’ the national anthem after minute’s silence for the Queen tonight, despite UEFA’s ban on playing it across stadium speakers

Chelsea fans are being urged to ‘belt out’ the national anthem after the minute’s silence in tribute to the Queen, despite UEFA’s ban on playing it in the stadium.

As reported exclusively by Sportsmail yesterday, Manchester City, Rangers and Chelsea made pleas to play God Save the King ahead of their home fixtures.

However, their request was denied by UEFA who refused ‘on the basis of maintaining a consistent pre-match ceremony with a subdued atmosphere and without any celebratory activities across all UK venues to show respect’.

The stance is set to be ignored by the Chelsea fans in attendance for Wednesday’s Champions League clash with RB Salzburg, with one fan group posting an image to Twitter showing the set-up at Stamford Bridge ahead of the game.

The picture shows one end of the ground decked out in Union Jack flags, and in the accompanying post it encourages fans coming to the game to do the same.

Stating ‘Setting up for tomorrow. Bring your Union Jack flags tomorrow if you have them. RIP Your Majesty’.

That tweet is quickly followed up by a plea to fans to ‘belt’ out the national anthem following the minute’s silence in tribute to the Queen, defying the ban UEFA have put on playing God Save The King. 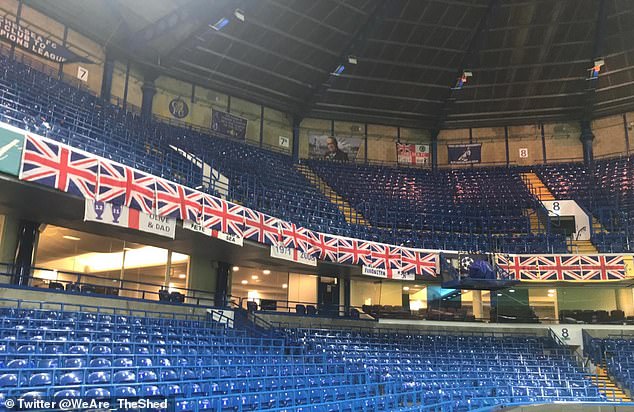 Rangers are also set to follow suit and sing the national anthem after their tribute to The Queen before their Champions League clash with Napoli at Ibrox.

UEFA have already confirmed the Champions League anthem would not be played before kick-off and black armbands would be worn by teams and staff where requested.

God Save The King was first sung before Saturday’s third test between England South Africa at the Oval and is set to used at Premier League games this weekend as part of the tributes being paid to the passing of The Queen.

Last week, just hour after the Queen’s death was announced, there were similarly moving scenes at other matches.

Thousands of West Ham fans broke into an emotional rendition of ‘God Save the Queen’.

Following the announcement last Thursday, players from both teams and the officials all wore black armbands as they gathered around the centre circle for a minute’s silence ahead of kick-off.

At the end of the minute’s silence there was a ripple of applause followed by a spontaneous rendition of the national anthem by supporters in the stadium.

West Ham also took other measures to ensure that they paid their respects to the Queen.

The advertising boards were turned off prior to kick-off, while the east London club decided not to make any stadium announcements and they played sombre classical music in the build-up to the game. 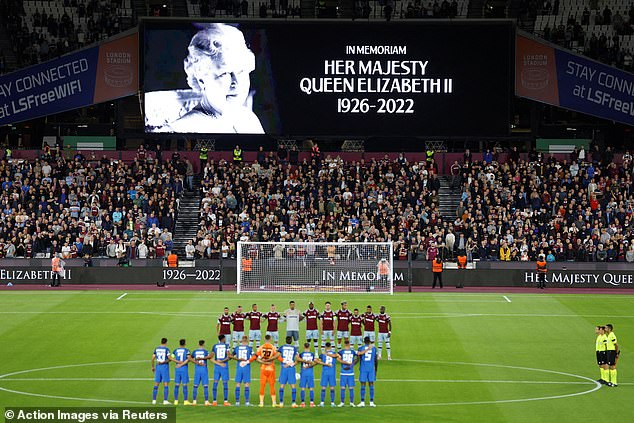 The scoreboards inside the stadium were also changed to black, while the badges of both teams were altered to black silhouettes.

Manchester United, who were hosting Spanish side Real Sociedad in the Europa League, opted not to play any pre-match music and the advertising hoardings were switched off following the news.

Both sets of players wore black armbands for the match, and United boss Erik ten Hag also wore one over his suit.

There was a minute’s silence before kick-off in honour of the Queen.