Chelsea have put plans in place to maintain their players’ fitness during the ongoing coronavirus lockdown. The Blues have issued specific, tailored instructions to each first-team member in order to keep them in peak condition ahead of the Premier League’s eventual resumption.

The season has been postponed until at least April 30 and is at risk of running well into the summer if all of the remaining fixtures are to be played.

Prime Minister Boris Johnson announced new lockdown orders on Monday which have seen all but essential shops and services close across the UK while movement of those not designated as ‘key workers’ has been restricted.

People are only allowed to leave home in order to travel to work, shop for food, exercise once a day or to address medical needs.

Public gatherings of more than two people who do not live together have also been banned, aligning the UK with much of Europe. 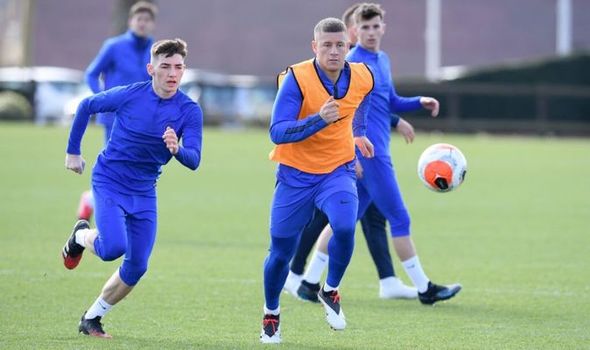 This means the Chelsea squad have been consigned to an indefinite spell at home, having recently completed their seven day stretch of self-isolation after Callum Hudson-Odoi contracted COVID-19.

The winger has recovered and has joined his team-mates in remotely following their specific exercise plans drawn up by Blues staff.

The Athletic report that exercise bikes have been delivered to every player’s home while skipping ropes and weights were also sent out in a bid to replicate some of the facilities available at Chelsea’s Cobham training ground.

Each Blues star has been issued with a GPS watch that logs their physical activity while staff are monitoring the results and providing daily feedback.

Two intense sessions per day are scheduled, but these are not just limited to the exercise bikes.

Players who have gardens are encouraged to do sprints and core strength exercises while those living closer to Stamford Bridge have been instructed to find quiet outside space to complete their running drills.

Some members of the team have been sent healthy food parcels to help maintain their diet while manager Frank Lampard and his backroom staff are in constant contact with the players.

Several members of the team are posting updates from their workouts on social media while the club are also running ‘Working from Home’ features on their official website whereby they conduct interviews with players over video calls to keep fans in the loop.

The Athletic report that these training measures have been accepted with no complaints while players remain upbeat about their current situation, despite no time frame on when football will resume.

Meanwhile, Willian has been granted leave to return to Brazil in order to be with his family – although other Premier League players have reportedly been denied similar requests by their clubs.

The 31-year-old is out of contract at the end of the season but has assured fans that he will complete the campaign with Chelsea, even if matches are scheduled beyond the expiration of his deal on June 30.

The Blues have temporarily put on hold all negotiations about contract extensions so Willian is one of four players in limbo over their status.

Willy Caballero, Olivier Giroud and Pedro are the other players affected, although the latter has already confirmed he will move on when his deal runs out.