Vibrant Chelsea made it a torrid few days for Liverpool as goals by Willian and Ross Barkley sealed a 2-0 victory to send them through to the FA Cup quarter-finals on Wednesday (AEDT).

Liverpool's 44-match unbeaten streak in the Premier League ended in stunning fashion with a 3-0 defeat at Watford on Sunday (AEDT) and they were rocked again at Stamford Bridge.

Keeper Adrian, in for the rested Alisson, endured a horrible moment when he allowed Willian's powerful shot to bounce off him and into the net in the 13th minute. 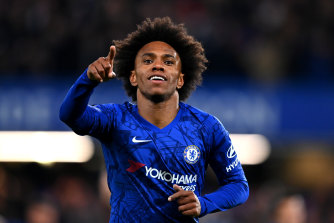 Willian put Chelsea ahead in the 13th minute.Credit:Getty Images

"They are the best team in the land, this year what they are doing in the league is incredible," Lampard said.

"So for us to put in the effort, focus, determination and quality was something special tonight. It's a one-off I know, but you have to celebrate these moments." 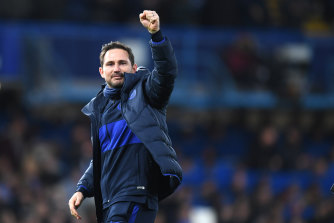 After having their dream of an unbeaten season wrecked at Watford, Liverpool's manager Juergen Klopp made seven changes but still started with Virgil van Dijk, Sadio Mane, Joe Gomez, Andy Robertson and Fabinho.

Klopp wanted an immediate response to the Watford shocker and he almost got it with Mane failing to capitalise on a golden early chance.

A frenetic opening saw Adrian make a stunning save from Willian but seconds later he turned villain.

Fabinho was caught in possession and Willian let fly again. The shot went straight at the keeper but it somehow squirmed past him and into the back of the net.

At the other end, Chelsea keeper Kepa Arrizabalaga, back for the first time since being dropped in January, made a remarkable triple save before half-time.

Liverpool faded in the second half and when Barkley burst forward and fired past Adrian the game was as good as over.

"We deserved to lose because they scored twice and we made massive mistakes for both goals," Klopp said. "Nobody has to feel sorry for us, we will win football games and that is what we want to do on Saturday."

Two goals from Migel Almiron and one second-half strike from Valentino Lazaro put the Magpies in command at 3-0.

Steve Bruce's side managed to hold off a late fightback, which saw West Brom score through Matt Phillips and Kenneth Zohore but could not find a third to force extra time.

Billy Sharp scored in extra time to give Sheffield a 2-1 win.

The Blades had led from the second minute through David McGoldrick until Romanian George Puscas levelled from the penalty spot before half-time.

Tags: Chelsea, knock, Liverpool, of, out
You may also like
Latest Posts