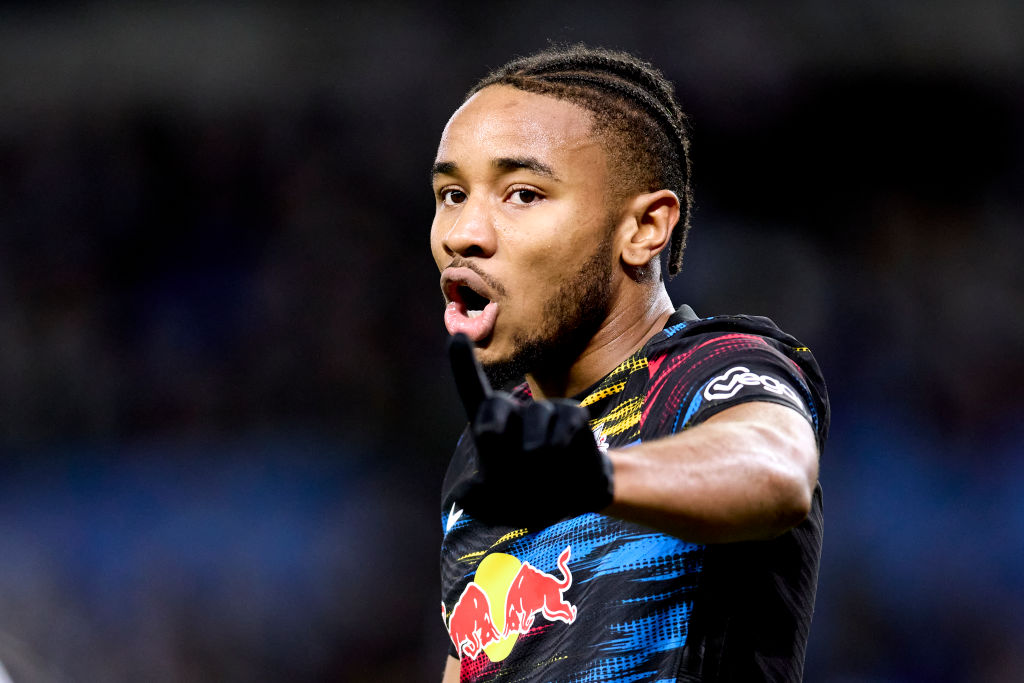 Chelsea and Manchester United target Christopher Nkunku has firmly ended speculation surrounding his future by committing to a new contract with RB Leipzig.

The Frenchman – who enjoyed a stellar campaign last season, netting 35 goals in all competitions – was on the radar of a host of Premier League clubs while French champions Paris Saint-Germain were also linked with a move to re-sign their former player.

But Nkunku says his story in Leipzig ‘is not over yet’ and has elected to sign a new two-year contract extension with the German side which will keep him at the club until 2026.

Speaking in a video clip as he put pen to paper, Nkunku said: ‘Greetings from Paris, but no worries I will be back in Leipzig soon – and I’m coming to stay.’

‘After our great achievement in winning the DFB-Pokal, it remained clear that my story here isn’t over yet – we want more!

‘I was really impressed with the club’s efforts to keep me, so a big thanks goes to those responsible for the trust in me and especially to [CEO] Oliver Mintzlaff, with whom I was always in close contact.

‘RB Leipzig have made a name for themselves on the international stage in recent years and have shown time and again that we can compete for titles. We want to build on that going forward and go one step further.’

Technical director Christopher Vivell added: ‘We’re proud and happy to have been able to keep hold of one of the best players in the world at the moment.

‘There are only a few players who can match the speed, flair and mentality that Christo possesses. In addition to that comes his incredible goal involvements this season.

‘Christo has developed into one of the Bundesliga’s best players at Leipzig and has also become a regular with the France national team. This success story is something that we want to continue writing together.’

Chelsea boss Thomas Tuchel was believed to be a big fan of Nkunku while Arsenal – who tried to sign the midfielder when he was still at PSG – were also linked with a move this summer.

United’s now departed interim boss Ralf Rangnick was also an enormous fan of the 24-year-old and was reportedly stunned when he discovered the club had not compiled any scouting reports on him and immediately recommended him as a player who would instantly improve the squad.

After a magnificent goalscoring campaign last season – in which he had a direct hand in 54 goals – Leipzig were rumoured to have slapped a £100million price tag on Nkunku, though his new deal may include a lower release clause which does not become active until next summer.