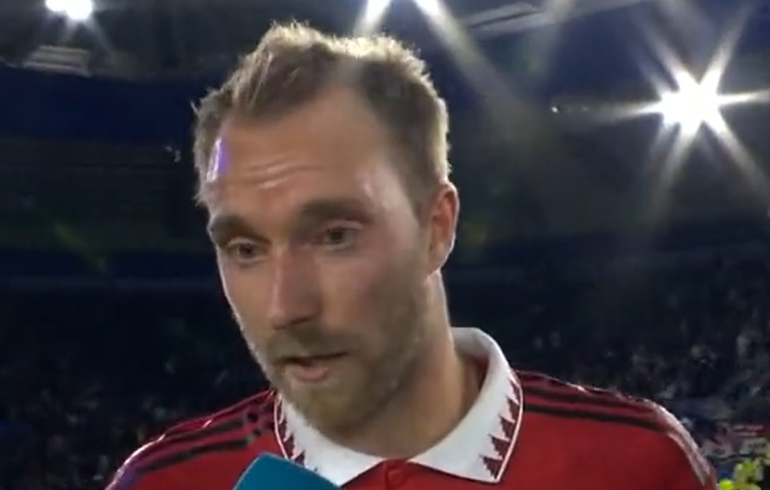 Christian Eriksen has warned his Manchester United teammates they must display a ruthless streak against Arsenal on Sunday after they nearly let Leicester City off the hook last night.

Erik ten Hag’s new-look side dominated the opening 45 minutes at the King Power but only had Jadon Sancho’s smartly taken goal to show for their superiority.

Brendan Rodgers’ struggling side improved after the break and United were indebted to goalkeeper David de Gea for preserving the lead as the Red Devils clung on to record their third straight win.

United host leaders Arsenal at Old Trafford this weekend in what will represent an acid test of their recent upturn in fortunes and Eriksen knows the Gunners won’t let his side off the hook in the way the Foxes did.

‘Yeah, I think from the start we had, we had a lot of things we needed to change and we have done that by winning,’ Eriksen said.

‘It was not beautiful for 90 minutes but we have three wins. I think at the moment we’re winning 1-0 and keeping it tight.

‘We obviously want to do better, but it’s a good start, we can take something from this and the three points are the most important thing.

‘I think we should have [killed the game], it was similar to Southampton. We did very well until we scored.

‘We have to keep momentum, we have to kill the game early, otherwise it’s going to be a tight game until the end like today.

‘From now on the games just keep coming, Thursday to Sunday, we’re looking good and getting the points.’