Bournemouth stormed to the top of the Sky Bet Championship on Friday night as Dan Gosling’s double helped them to a 3-1 win over Coventry.

Moments after guiding a gilt-edged chance over the bar, Gosling swept home his first from inside the penalty area (51) and his second – a rasping drive from distance – sealed a valuable three points for Jason Tindall’s men (61).

Coventry – who sit 15th in the table – were reduced to 10 men after Gustavo Hamer appeared to raise a hand to Steve Cook’s face (69).

How Coventry were picked off by the Cherries

The first meeting between the two sides in over seven years started with real promise and the opening goal hit the back of the net inside 10 minutes. 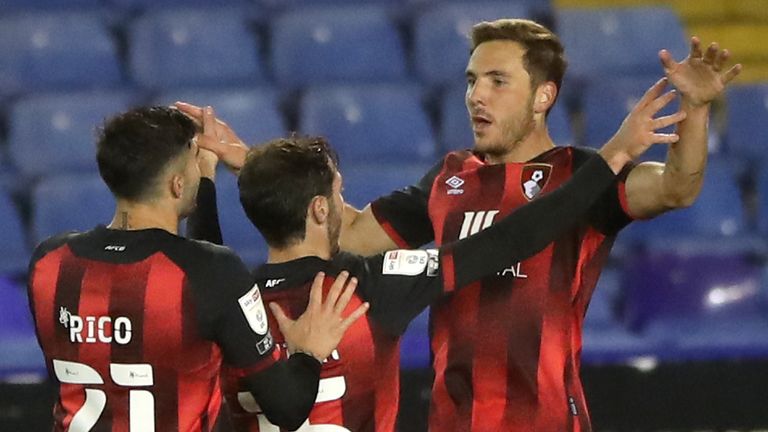 Having over-run a chance of his own, Dominic Solanke turned provider, receiving the ball inside the area and intuitively laying the ball off to Lerma, whose effortless first-time effort nestled far beyond the grasp of goalkeeper Marko Marosi.

It was only the start of the action that followed, though. Asmir Begovic had to be alert to push Hamer’s low strike round the post and the Netherlands U20 international then fired a warning shot over the bar, shortly after Coventry had cleared their lines from a dramatic goalmouth scramble.

Solanke’s hold-up play was as impressive as the chances he carved for himself, but due to impressive interventions from Dominic Hyam and Marosi, he was denied two significant chances in quick succession.

Momentarily, Bournemouth were left to rue those spurned opportunities, as Godden tucked home a penalty after Ben Sheaf had been clumsily brought down by Lewis Cook, but Gosling settled any increasing nerves when he slotted his first of the season after the break.

The second came from nothing, when Diego Rico found Gosling with a smart pass close to halfway. The onrushing Hamer pulled out of a challenge as the midfielder drove on and rifled a shot over the line, before the former was given his marching orders following an altercation with Steve Cook as the Sky Blues’ evening ended on a sour note.

Man of the match – Dan Gosling

“Tonight, Gosling epitomised the fact that Bournemouth came to St Andrew’s with a game plan. He was a big part of the high press, his average position was in Coventry’s half and he made really good use of that position throughout.”

Coventry’s Mark Robins: “It was difficult to start with but you can’t go down to 10 men and expect to get anything from a game. I’ve looked at it and it’s very soft, in fairness. Other than that, we were second best – there’s no doubt about it.

“When you come up against a team with better players, it can become difficult. Coming in at 1-1 at half time probably flattered us a little bit. We just didn’t have any control and we were on the back foot too many times but for us. There’s a lot of learning in this game, so we’re going to go away, pick the bones out of it, learn from it and come back stronger from it.”

“When you look at the start that we’ve had – 10 points from our opening four games – it was always important, after the disappointment of last season, that we started the season very well and we’ve managed to do that. The players are confident and they’ve given another good team performance today.”

With the October international break occupying the next weekend, both sides are next in action at 3pm on Saturday October 17. Coventry travel to west London to face Brentford at the Brentford Community Stadium, while Bournemouth host QPR at the Vitality Stadium.

Tags: (1-3, Bournemouth, Coventry, Dan
You may also like
Latest Posts

Damien Oliver and Gai Waterhouse the perfect pair in Empire Rose
Recent Posts
This website uses cookies to improve your user experience and to provide you with advertisements that are relevant to your interests. By continuing to browse the site you are agreeing to our use of cookies.Ok