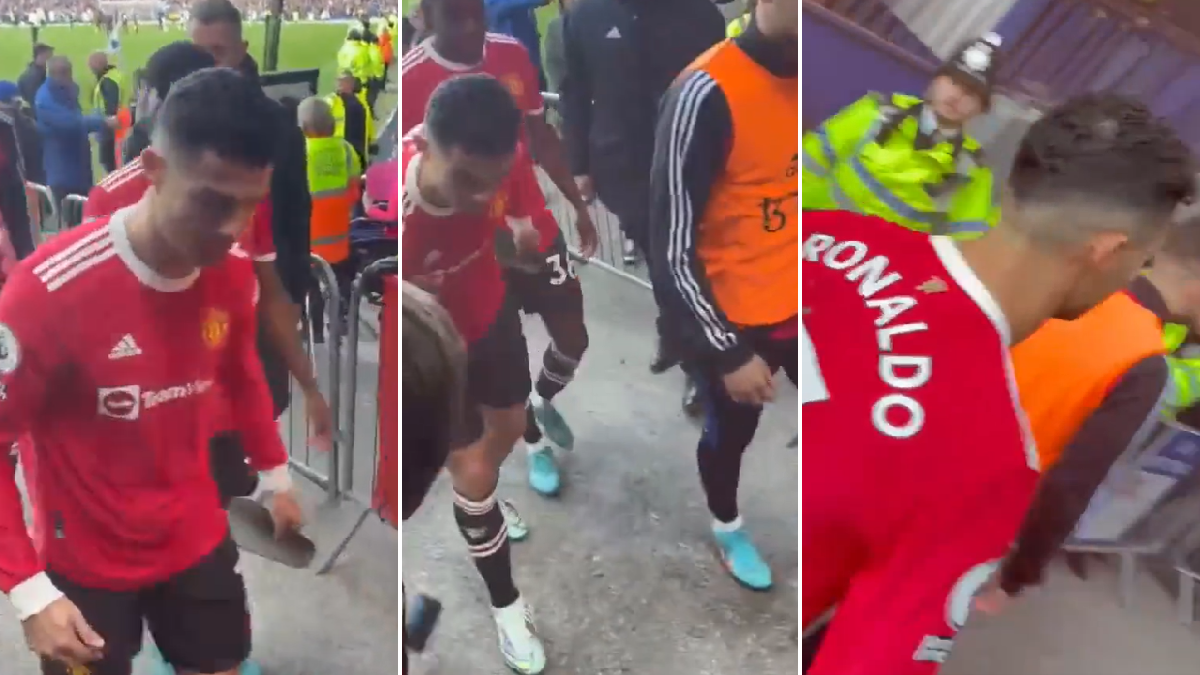 Cristiano Ronaldo has been cautioned by police after he smashed a child’s mobile phone in anger following Manchester United’s defeat against Everton back in April.

Footage taken by at the time captured a furious Ronaldo storming towards the tunnel area and slapping the railings which separate the players from the home supporters.

A subsequent image emerged on social media which appeared to show the remains of a damaged mobile phone splayed on the concrete, with eyewitnesses claiming the device belonged to a young fan.

Ronaldo later apologised to 14- year-old Jacob Harding and earlier this month, according to The Mirror, was interviewed by police under caution in relation to an alleged assault and criminal damage.

In a statement on Wednesday Merseyside Police said: “We can confirm that a 37-year-old man voluntarily attended and was interviewed under caution in relation to an allegation of assault and criminal damage. The allegation relates to an incident following the Everton v Manchester United football match at Goodison Park on Saturday 9 April.

The incident took place after United had been condemned to a defeat which effectively ended their hopes of Champions League qualification and, in turn, helped the struggling Toffees preserve their Premier League status.

After the game, the teenager’s mum, Sarah Kelly, revealed her son suffered bruising such was the ferocity with which Ronaldo slapped the device out of his hand.

She said: ‘At full-time the United players started walking off. We were right by the tunnel – my son was there, videoing them all. Ronaldo then just walked past, with a terrible, terrible temper, and smashed the phone out of his hand.

‘You can see by the bruise that he’s made contact. I was crying, I was shook up, Jacob was in complete shock – he’s autistic and he’s got dyspraxia as well, so he didn’t really digest what was happening until he’s come home.

‘He’s really upset and it’s put him off going to the game again. We had an absolutely brilliant day up until those final few seconds.’

Ronaldo subsequently issued an apology on his Instagram account, admitting his emotions after such a damaging result had got the better of him.

He wrote: ‘It’s never easy to deal with emotions in difficult moments such as the one we are facing.

‘Nevertheless, we always have to be respectful, patient and set the example for all the youngsters who love the beautiful game.

‘I would like to apologise for my outburst and, if possible, I would like to invite this supporter to watch a game at Old Trafford as a sign of fair-play and sportsmanship.’