Just when Leicester City looked to be turning a corner some ugly habits reared their head once more.

Brendan Rodgers boarded the team flight out of Warsaw on Thursday night tasked with solving the issues of their slow starts.

So often they found themselves giving teams a leg up and it left them chasing games. If they were going to have another tilt at the top four that was a method of madness. Those slow starts are in part why everyone around the club will have been so keen to see the back of September and a month where they managed just one win from six games. 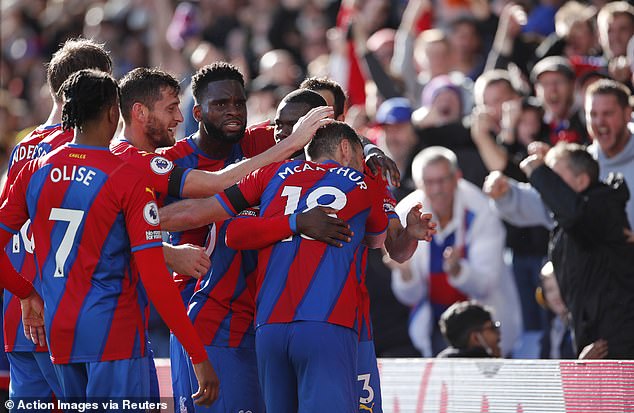 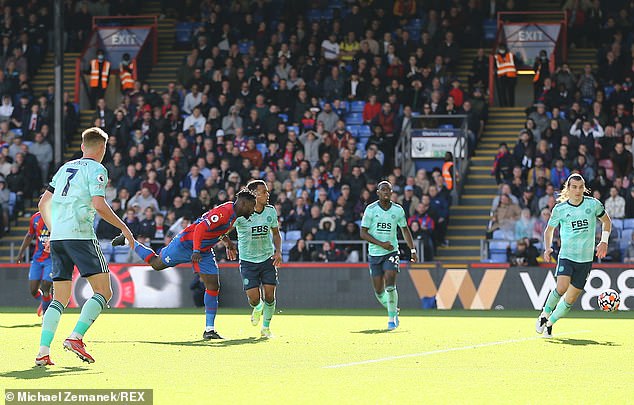 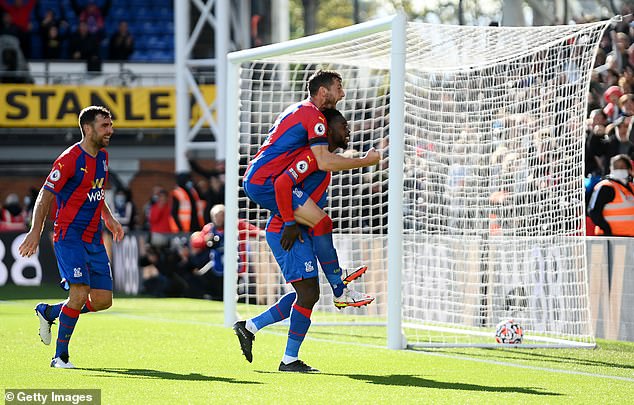 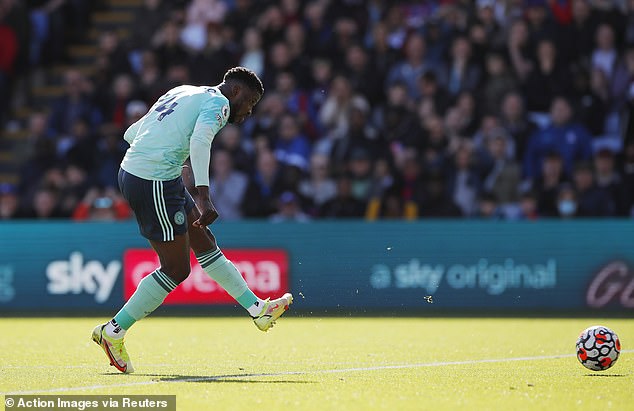 After a slow half an hour, Kelechi Iheanacho gave Leicester the lead against the run of play 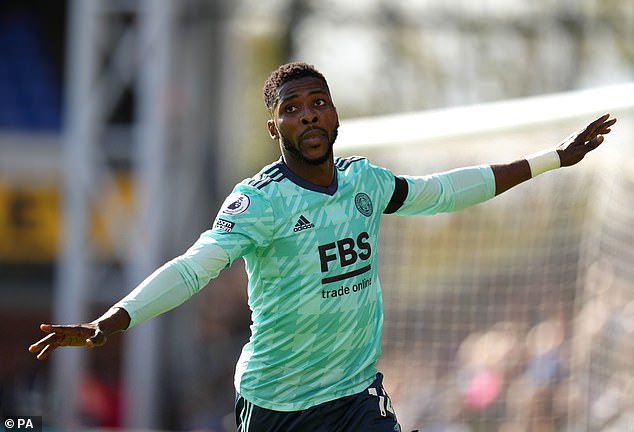 And so when the half-time whistle blew here with Leicester 2-0 up following a frantic seven-minute spell in which Kelechi Iheanacho, celebrating his 25th birthday, and Jamie Vardy ruthlessly punished a Palace side that had dominated, it felt like a corner had been turned.

Only this habit of turning in solid 45-minute, rather than 90-minute, performances is going to be tricky to knock firmly on the head and that is why Palace never appeared to lose hope. Even at 2-0 down fans felt encouraged.

So when 19-year-old Michael Olise, on as a substitute for the ineffectual Jordan Ayew, scored his first ever Premier League goal seven minutes after being introduced to halve the deficit, there was a growing sense of inevitability about what would follow for Rodgers and his players.

Patrick Vieira has proven himself a master of his bench this season, knowing when exactly to make a change and get a result from it.

Against Tottenham it took Odsonne Edouard 29 seconds to make his mark. Yesterday it took 48 seconds for former Leicester full-back Jeffrey Schlupp to make it 2-2. Talk about super subs.

But before Leicester’s fall we need to recap the rise and for 45 minutes, while not magnificent, they were clinical.

Vieira’s side had been dominating, peppering Kasper Schmeichel’s goal for half an hour, before Joachim Andersen’s nightmarish afternoon began.

Watching it unfold in real time it was almost as if it played itself out in slow motion. Marc Guehi across to Andersen who, pressured by an onrushing Iheanacho, tied himself in knots and soon the striker was barrelling down on goal. 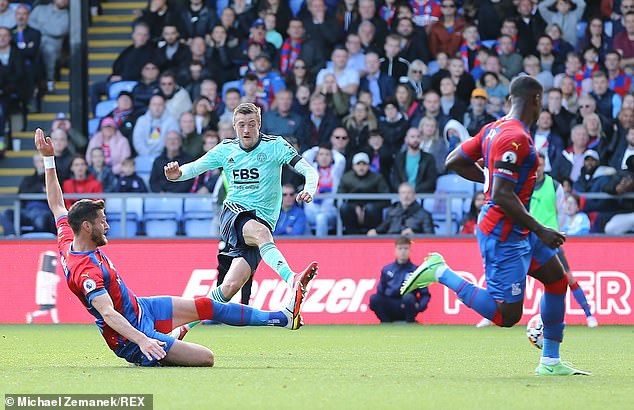 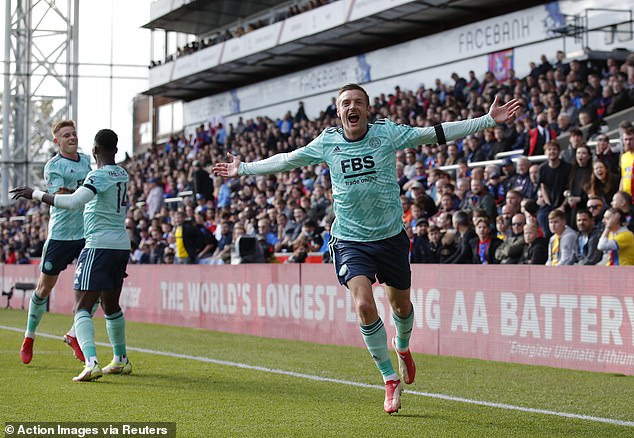 The Leicester veteran holds his arms aloft, with Palace ruing their inability to find the net 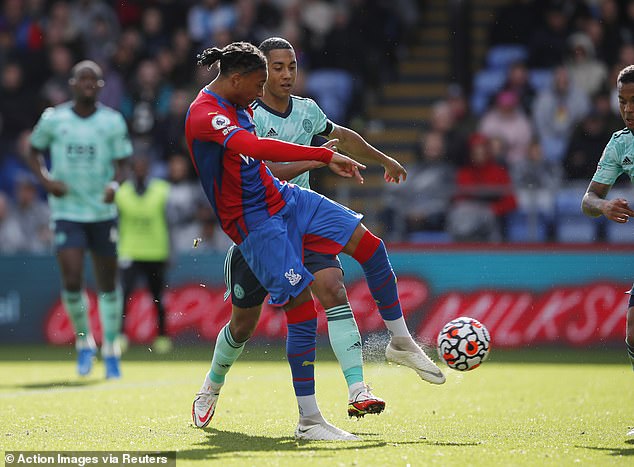 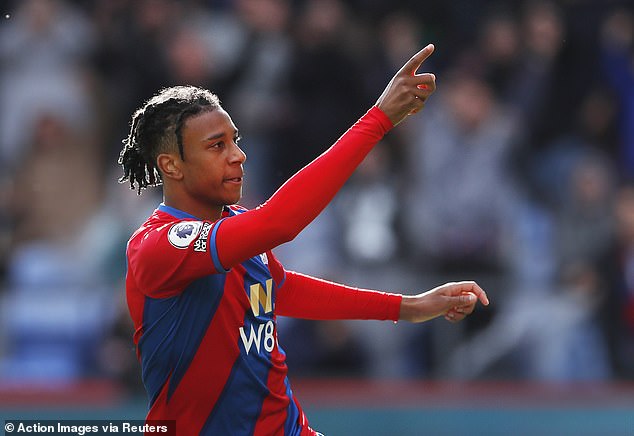 In for his first league start of the season, hyped up on his birthday, it would have been easy for him to have snatched at the chance, overthought what he was going to do, and yet there was nothing of the sorts. Low and hard into the corner, 1-0. Cue an explosion of noise in the away end.

Palace were stunned. Leicester looked bereft of ideas and energy after their efforts away in Warsaw, even with Rodgers making six changes from the trip for this one.

And then five minutes after being shell-shocked by the birthday boy, mouths were left agape across Selhurst Park as Jamie Vardy made it 2-0. 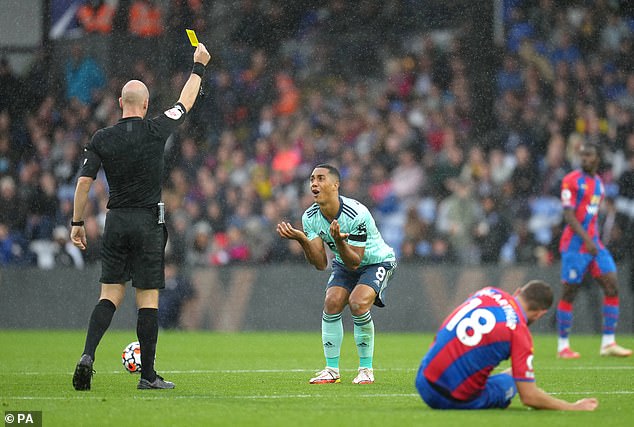 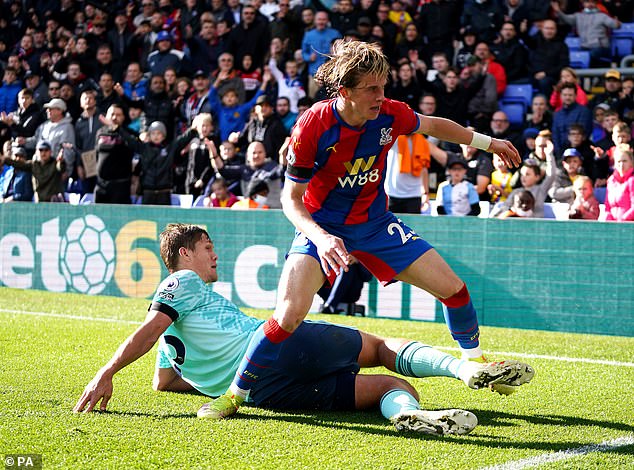 This time it was a breakdown in the Palace midfield, seized on by Harvey Barnes and as he drove forward he had the enviable sight of Iheanacho to his right and Vardy to his left.

Guehi and Andersen were befuddled deciding whether to close down Barnes or push wide with the strikers and in the end they didn’t seem to do either. Vardy was Barnes’ choice and as he has done to many of Guaita’s peers, Vardy gave him the eyes before firing in low to the near post.

Palace were staring a first home defeat under Vieira in the face, only to force Leicester into some familiar mistakes with Olise and Schlupp the beneficiaries. 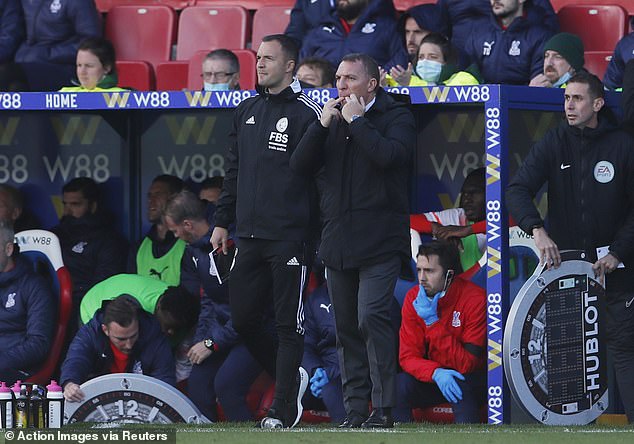 While Rodgers won’t concede it the international break comes at an opportune time. They need to reset and get whatever is in their system right now out because they have been limping in the league for a while.

They have no won just five of their past 16 league games, including two from seven this season.

For Palace, it is easy to see why fans are so excited at this new era under Vieira. Young players are flying, substitutes are taking their chances and teams – which now includes Leicester – well and truly hate coming to Selhurst Park.

Tags: 2-2, Crystal, Leicester, Palace
You may also like
Latest Posts