‘I wish I could score every week!’ Declan Rice hails ‘amazing’ West Ham win over Rapid Vienna… with the England star relishing playing with ‘special’ Mark Noble in his final season

Declan Rice joked that he could get used to scoring regularly as he bagged his second Europa League goal in two games in West Ham’s 2-0 win over Rapid Vienna.

Rice opened the scoring for the Hammers, driving into the box and slotting home Michail Antonio’s assist in a lovely move that sent the home fans into delirium on a raucous evening.

West Ham were hosting their first big European game in 15 years and the London Stadium was packed to the rafters to see their side maintain a 100 per cent record in the Europa League so far after overcoming Dinamo Zagreb last time out. 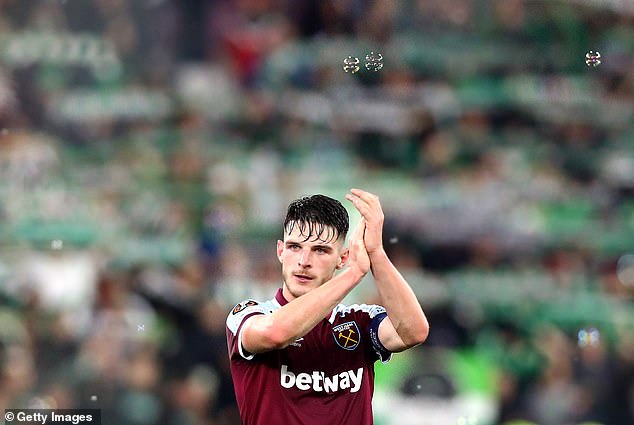 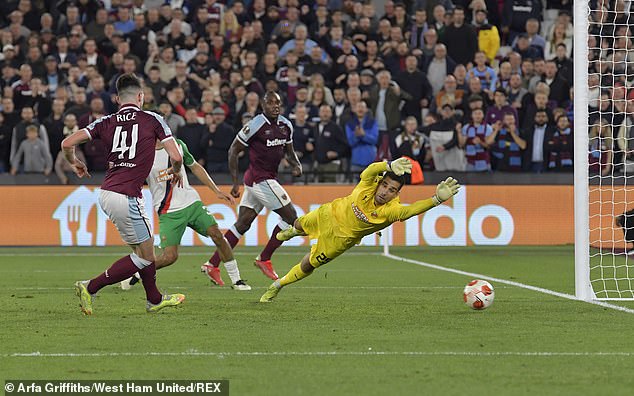 And the England midfielder credited midfield partner Mark Noble with his decision to play higher up the pitch, which resulted in his goal.

Rice told BT Sport: ‘It’s funny, when I knew I was playing with Nobes, I said ”I’m going to try and bomb on a little bit tonight”. I said to him ”I’m going to score”.

‘So when the opportunity came, I just read that there was a bit of space to run into, and I suppose if you don’t make the runs, you’re not going to get a chance.

‘To score again, it’s becoming a really nice feeling, I wish it could be every week!’ the 22-year-old joked. 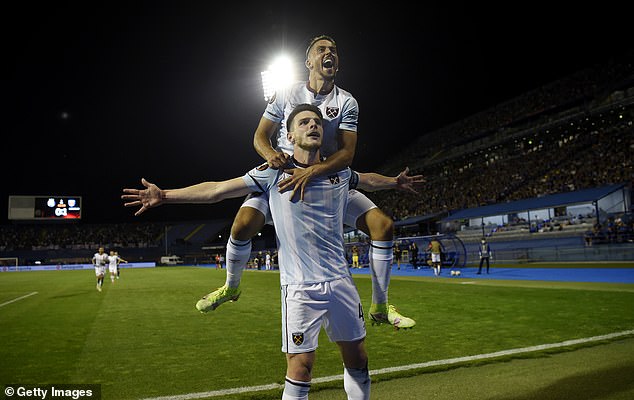 Speaking more generally about the performance, Rice said: ‘It was amazing. As players we knew tonight how big it actually was. We had to put on a performance and we had to win as well.

‘Of course we want to top this group, we’re going to take it a game at a time. To get the win out in Zagreb and get the win tonight, it’s a really good night for us as players and for the fans as well, it’s what they have waited to see.’

Rice also paid a moving tribute to Noble, a club legend who captained the side against Rapid in his 550th appearance for West Ham.

‘He’s special, I’ve managed to spend six seasons with him, the first two as a little kid, (and) four playing with the first team,’ he said. 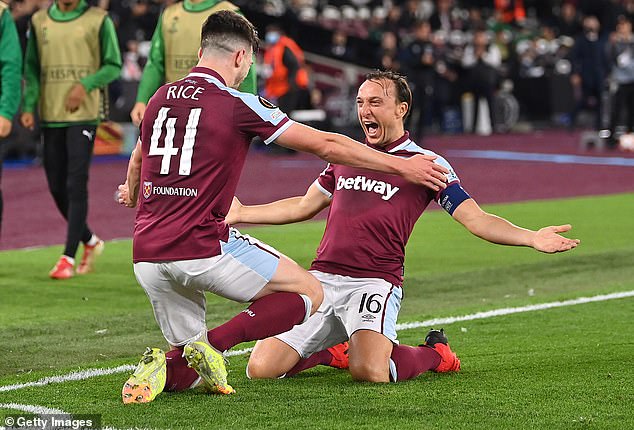 ‘I’ve learnt so much from him, just to play next to him, see what he’s like as a person and a man. There’s no one better to learn off than Nobes.’

Noble, 34, revealed in March that he would retire after this season, and Rice said he plans to make the most of having his mentor around.

‘To get to play with him again tonight, I’m going to cherish every one because it’s his last season,’ he said.

‘You don’t get to play next to Nobes every day so I’m going to keep it up.’