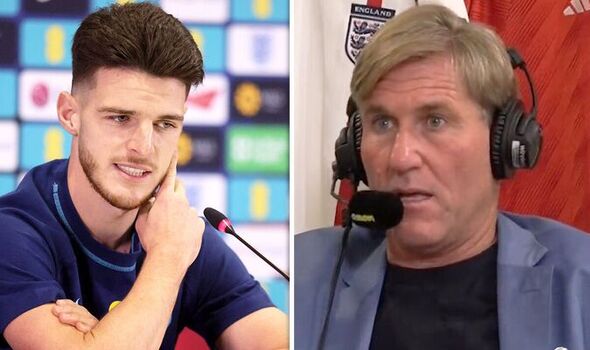 Chelsea and Manchester United have been warned £100million would be too much to spend on Declan Rice. Former Crystal Palace chairman Simon Jordan cannot see how the West Ham star is worth that amount and has given a savage verdict on his World Cup so far.

Rice has long been linked with a move to either Chelsea or United. He spent time in the Blues’ academy until he was released at the age of 14.

There are 18 months remaining on his contract but the Hammers have the option to extend it until 2025. He has rejected all offers of a renewal so it will soon reach a point where his future must be sorted.

But Jordan says Rice does not strike him as a £100m footballer. He joked the 23-year-old hasn’t played a single forward pass in England’s first three matches at the World Cup so far.

Jordan said on talkSPORT: “I’m underwhelmed, and there’s probably going to be a collective inhalation of breath, I’m underwhelmed by Declan Rice. I think he’s a very good player but I’m trying to work out what a £100m footballer should look like.

“And I think it should look like something a little bit more compelling than the showing we’ve currently got. But that may be just because he’s being asked to play a certain [way].

“There’s a rumour going around here that eventually Declan Rice is going to pass the ball forward in this tournament. He’s a player that is coming with a great reputation.

“I’m not entirely sure he’s having the greatest World Cup but I would expect at the end of this season you’re going to find Declan Rice with a decision.”

He claims there is far more to Rice’s game than he is currently showing at international level. Pearce said: “In all honesty, I’ve half had those frustrations at club level. He’s got so much more in his locker. He’s got a brilliant range of passing.

“When I talk about getting teams turned, he is in a key position to get us turned and go forward with diagonal passes or forward passes through the lines. He’s got a great range of passing.

“I’ve seen it first hand for two years. I think there’s more in his locker than just breaking things up.”

Think you can predict the World Cup Golden Boot Winner? If so you could WIN £150 in Nike vouchers! CLICK HERE