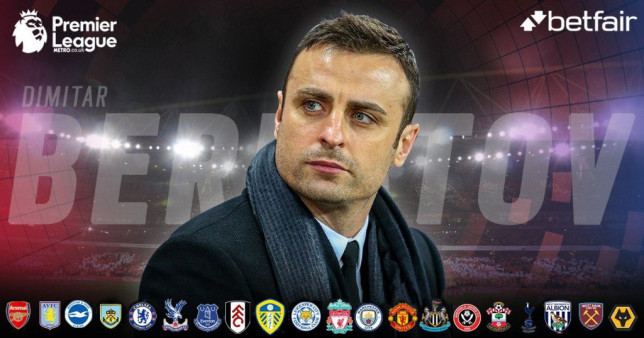 Dimitar Berbatov has delivered his predictions for this weekend’s Premier League action, including Manchester United’s meeting with Leeds at Elland Road on Sunday.

Also on offer is Liverpool’s matchup against Newcastle and a crunch top-four clash as West Ham host Chelsea at the London Stadium, with both of those games taking place on Saturday.

As ever, Betfair Ambassador Dimitar Berbatov previews the action for Metro.co.uk.

This is a big game, not only for Liverpool in the race for the top four but also for Newcastle who need the points. On paper Liverpool have so much class in their team, not that it has helped them much this season, and although Newcastle have picked up some important results I think this will be too tough a test for them. Prediction 3-1.

Oh my god, this is going to be an interesting game. Some people may think this will be a game that both teams can’t afford to lose so it will be tight, but I can see goals in this one. West Ham are surprising everybody and doing well but they also play quite openly at the back and Chelsea have great attacking options, West Ham play as a team and know how to get the ball in the back of the net. I can see this one being a draw. Prediction 2-2.

Sheffield United are playing for nothing and they have been relegated, Brighton need the points. United will be more relaxed and playing purely on pride, and that can have a big impact in matches, but in this one I can see Brighton getting a result. Prediction 1-2.

Burnley are in trouble, they do have a six point cushion, but you never want to be looking over your shoulder going into the final games of the season. Wolves will just want to get everything over with and get ready to re-start next season. I’ll go for a draw in this one. Prediction 1-1.

This will be a good one. I’m going to back my old team because they are still chasing down Man City, who were lucky to beat Aston Villa. Leeds are a creative team who like to get forward, but they leave a lot of spaces at the back and I hope United will be able to exploit that with Rashford running in behind them. Prediction 1-3.

I think Aston Villa were a little luck against Man City midweek, the gave them a good game and got that early goal. They should have enough to beat West Brom. Prediction 2-1.

For more from Betfair Ambassador, Dimitar Berbatov, head to https://betting.betfair.com/football/dimitar-berbatov/