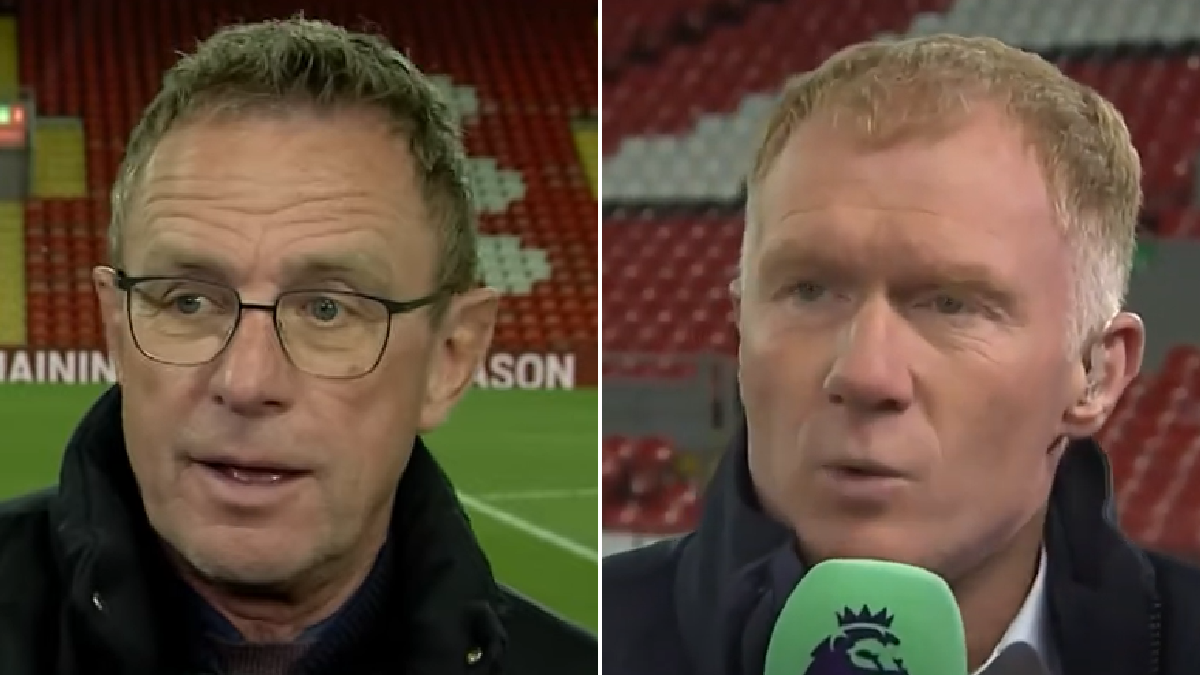 Paul Scholes warned Manchester United’s fans not to be fooled by Ralf Rangnick’s claim that his tactical tinkering was responsible for a supposed second-half improvement against Liverpool last night.

Jurgen Klopp’s relentless winning machine crushed the life out of United last night as Liverpool cantered to a 4-0 win over their fiercest rivals at Anfield.

Rangnick raised eyebrows with his team selection before the game and left pundits and supporters baffled by the decision to hand Phil Jones only his second start of the season at the heart of a five-man defence.

It took Liverpool just four minutes to expose Rangnick’s gameplan and open the scoring through Luis Diaz and the contest was effectively over when Mohamed Salah doubled the lead midway through the opening period.

Rangnick responded at the interval by ending the Jones experiment and reverting to a flat back four.

United did improve and at least offered a semblance of attacking threat following the introduction of Jadon Sancho, but late goals from Sadio Mane and Salah again ensured the chasm that exists between the two sides was fairly reflected in the scoreline.

Afterwards, a beleagured Scholes took issue with Rangnick’s claim that his management triggered a more positive display from his team and suggested that was more to do with Liverpool being ‘bored’ of toying with the opposition.

He told Premier League Productions: ‘He (Rangnick) is honest, especially in these big games. He’s probably a bit too honest.

‘The stats don’t surprise you, Man Utd never laid a finger on any one of their players at any time. They were allowed to do what they want.

‘The motivation thing… United weren’t up for it and it’s difficult to take that. They should be up for any game, whether it’s Liverpool away or Watford away.

‘But you need motivation from your coach. You play that many games and sometimes you just need a word from your manager and you think OK here we go again, you’ve got to step up and have got to be ready for the challenge of playing a proper football team.

‘They looked bereft of ideas they looked lost they looked unenthusiastic, they looked flat and looked a group of players that were flat and there are a lot of experienced players in that team.’

will flagyl give me diarrhea
Recent Posts